Sing Me a Song

The teacher is not happy with his student. "Instead of studying," he says, "you're always on your mobile [phone]." A young couple meet online and long to see each other IRL. When it happens, they sit opposite one another, barely speaking, and look at their phones. "On WeChat, you looked bigger," she says.

These are moments we all know too well. But there is something different in the documentary, "Sing Me a Song," from director Thomas Balmès. The young man who is in trouble with his teacher and not able to speak to the young woman he was e-courting is Peyangki, a young monk from Bhutan, who has been living in a monastery since he was a child. Balmès tells us as the movie begins that Bhutan was the last country in the world to get access to television and the internet, and Laya, a small town in the Himalayas, was the last place in Bhutan to go online. Balmès' earlier documentary "Happiness" showed us Peyangki as an eight-year-old, devoted to his religious practice and getting his first look at the world outside of the monastery. In this sequel, we see him in these early years, learning prayers, telling us he is both excited about electricity coming to his community but scared as well. He does not understand what it means well enough to worry about the upheavals and distractions. He has heard that sometimes electricity causes fires. But of course the damage it causes is much more complicated.

And then it is ten years later, and the young monk is awakened by a tinny electric jingle on his cell phone. He then awakens the others by more traditional means, ringing a gong. Balmès is especially gifted at framing his images. The composition is exceptional, particularly considering the intimacy of the moments on screen. It would be fascinating to see a separate movie about how he gained not just the access but the confidence of the monks and the other characters who come into the story and who seem unaware of the cameras, even in the most private conversations. In one scene, Peyangki finally meets Ugyen, the young woman he has been talking to online. As her comment on his size indicates, each is discovering they did not know one another as well as they thought. For example, he quietly points out that she did not mention she had a child. He says very little to indicate his disappointment. But the camera catches one small, silent tear slipping down his cheek.

The images benefit enormously from the breathtaking beauty of the mountain setting, and from the monks' deep burgundy robes, which add a vivid splash of contrasting color to many of the scenes; fire and candlelight lend a warmth and timelessness to the film's faces and colors, serving as a sharp difference to the harsh, artificial lighting of the nightclub where Ugyen dances.

The compositions are not only beautiful but also compelling illustrations of contrasts. In one shot, two groups of burgundy-robed monks sit opposite one another on two sets of gray concrete steps in front of a building. The visual is so striking it takes a moment to realize that it underscores the points Balmès is making without any unnecessary narration about the collision between the millennia-old traditions of the Buddhist renunciates and the modern world. They sit on the steps until the building opens. It is an internet and games parlor, where they can go in and play first-person-shooter games, pretty far from their life of contemplation, prayer, and finding the holiness in tasks like sweeping and candle-lighting.

We may smile at the universals that apply even in the most isolated corners of the world. Even in the tranquility of a monastery on top of a mountain, some boys will still slide down the bannister, turn cartwheels, neglect their studies, play with guns, and pretend to blow things up. And some will go to extremes to be with a girl. It is hard not to spend too much time on our phones. But our smile will be more wistful when we watch the young acolytes lighting the candles—their peaceful, deviceless world as enticing to us as the world of infinite connections is to Peyangki.

Now playing in virtual cinemas and available on digital platforms. 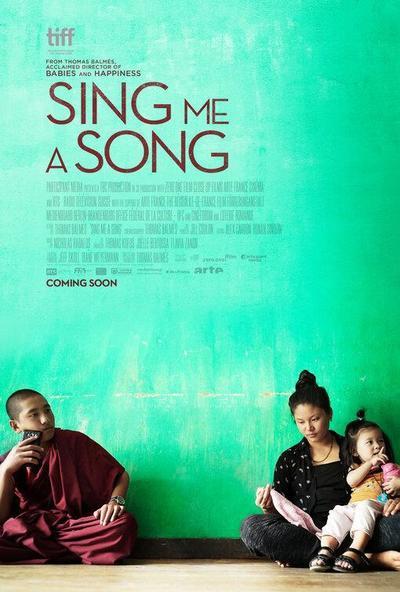