Mahendra Saini (Rajesh Tailang) is a chain-wallah who peddles his zipper repair skills on the streets of Delhi. Armed with a megaphone, Mahendra markets himself to anyone within earshot. As with any service-oriented business, location is everything. So when his usual beat stops being fruitful, Mahendra’s 12-year old son, Siddharth, is recruited to earn a second income. Mahendra’s brother-in-law, Ranjit (Anurag Arora) suggests a trolley factory where child labor, though illegal, is a means of income. Siddharth travels to the factory unharmed, but two weeks before he is to return home, he disappears.

“Siddharth” uses this story to comment on the state of abducted and runaway children in India. It defies expectation by resisting the potentially exploitative aspects of its subject matter. Instead, director and co-writer Richie Mehta focuses on the parental and societal response to Siddharth’s disappearance. Mahendra sets out on an exhausting journey to find his son, and each person he encounters, from the police, to child services, to the factory manager who hired Siddharth, reacts in a nonchalant manner. It’s as if the disappearance of a child has become so commonplace that it has lost its shock value and outrage.

A sense of hopelessness invades every frame of “Siddharth,” yet its story is not emotionally manipulative. Those looking for the typical children-in-peril style mystery, one that ends with a standard resolution, will be dissatisfied. It is clear early on that Siddharth’s disappearance will be used in service to a much bigger issue, and that we may never find out his whereabouts. As Mahendra’s search goes on, its sense of dramatic urgency is tempered by the realism of Mahendra’s financial situation. As much as he’d like to drop everything to seek out his son, these monetary issues force a much slower call to action. As the film waits for Mahendra to earn enough money to buy a train or bus ticket to track down his latest lead, time mercilessly passes.

When Mahendra files a report with his local police chief, she abruptly scolds him for his actions. “You people never learn,” she says. She lectures him on how far too many people opt to send their children to work illegally rather than put them in schools. “He was going to have to work sometime,” Mahendra protests, though this is his pride speaking. Like so many others faced with this decision, he would rather have been the sole breadwinner in the family than farm out his kid. His economic situation forced his hand.

To its detriment, “Siddharth” doesn’t focus enough on the economic aspect of the problem. It does, however, explore how the Saini family dynamic is affected after their son disappears. Mahendra’s wife, Suman (Tannishtha Chatterjee, in a fine performance) shows more outward emotion than her husband. She has a very good scene where she echoes the same commentary Mahendra heard from the police chief. She chides him for not being able to support his family, blaming him for their tragedy. When Mahendra points out that Suman supported sending Siddharth away, her retort speaks volumes about how much say she has in decision-making: “I didn’t approve. I remained silent.”

In a seemingly more sinister context, Ranjit also remains silent. He knew about Siddharth’s disappearance far longer than Mahendra and Suman did. The factory owner, Om Prakash (Amitabh Srivasta), reported to Ranjit that Siddharth ran away from the factory long before his work contract ended. That Ranjit doesn’t report this, and his reasons for not doing so, are weak spots in the script. An even bigger problem is the idea that, despite having cell phones, neither parent has a picture of their son. Whether a picture or a quicker response from Ranjit would have changed the final outcome remains unknown, though a large shadow of doubt is cast by “Siddharth’s” resolution.

The film follows Mahendra on every lead he has while trying to find his son. It takes him to the factory, where Siddharth’s roommate suggests a location he’s heard missing children are found, and to that location in Mumbai. Rather than stoking suspense, Mehta uses these trips to provide information and social commentary. I wish the film’s tone were angrier while delivering its message, though I think the lack of outright anger is Mehta’s point. More than once, the people Mahendra encounters express a cavalier attitude toward his missing kid (“You can always make another one,” one person tells him), but others share his frustration. A social worker shows empathy, but ultimately laments “we’re underfunded as it is,” when Mahendra seeks her help.

Tailing underplays his emotions—sometimes too much—but late in the film, he’s very good at depicting scenes of Mahendra’s stress-fueled unraveling. The last few minutes of “Siddharth” find him engaging in two brutally honest conversations. The second is with Mahendra’s father, who provides a seemingly vicious though realistic piece of advice. The first conversation is with runaway Mumbai street kids who ask stinging yet pertinent questions before one nonchalantly states the sad truth that Mahendra may have to accept.

“Maybe Siddharth got lucky and left this world.”

“Siddharth” leaves it up to the viewer to decide whether this lucky notion is a comfort or a tragedy. 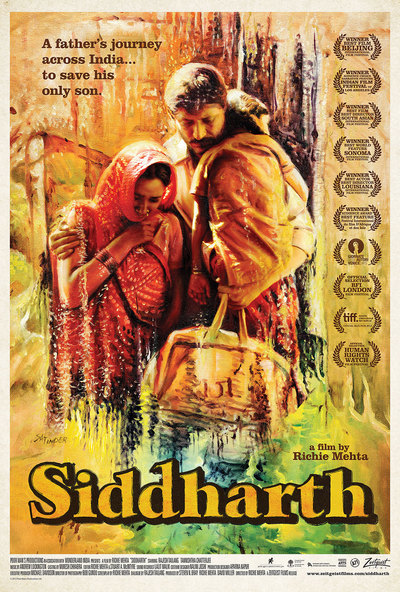