In Emma Seligman’s delightfully anxiety-driven comedy “Shiva Baby,” the post-funeral service rites of a Jewish family and friends are interrupted by a chaotic series of one-upmanships and unexpected guests. Based on Seligman’s short of the same name, “Shiva Baby” follows Danielle (Rachel Sennott) on her way to meet her family for the somber occasion after an appointment with her sugar daddy. Once reunited with family, Danielle’s parents Debbie (Polly Draper) and Joel (Fred Melamed) put her in bad spirits with their fussing and arguing as they head into a house to mourn an old family friend, someone Danielle doesn’t quite remember but is pretty sure played cards with her grandmother. However, her stress is just beginning. Danielle runs headfirst into a slew of questions about her future prospects, both professional and personal, from family friends and relatives. Then, she spots an old childhood friend she had a relationship with, Maya (Molly Gordon), someone her mother now instructs her to avoid. The awkward situation gets even more complicated when Danielle’s sugar daddy, Max (Danny Deferrari), arrives at the party. His wife Kim (Dianna Agron) and their baby, Rose, will soon arrive. Now, Danielle must navigate between prying questions about her life while stifling her horror at being stuck in the same house with two people she kept at a distance.

Writer and director Seligman bottles these inter-personal tensions and slowly simmers them to boil, escalating each situation by just the right amount until the film’s ultimate crescendo and final punchline. The result is a painfully funny comedy that feels both universally relatable in its depiction of awkward family dynamics and very specific to Danielle’s experience of watching her sex life collide with her religious community. There’s almost no other ally she can count on at the shiva, and every new room brings with it a new set of unpleasantries. Even before she steps into the house, Danielle is on guard against others’ judgement, yet it’s all she seems to find in whispers and side-long glances. But it’s not without a valiant defensive effort. She rehearses her answers about what she’s doing with her life with her parents so that everyone is on the same page. It’s the kind of mental gymnastics and fake pleasantries one does to save face, like a pained smile to soothe over any disapproving raised eyebrows. Seligman captures these performative nuances with astute precision.

But Seligman’s masterful approach would have not been nearly as effective were it not for Sennott’s exquisitely exasperated performance. She strikes the perfect tone of feeling annoyed by her parents and mortified by the situation of getting stuck with her ex and sugar daddy. Every piercing stare, facial muscle twitch, and heightened voice conveys her outrage hidden behind her feigned smile. Danielle’s interactions with Max and Maya each have their own rhythm and emotional arc. With Max, there’s a slow suspense of whether or not they will continue their arrangement now that she knows he has a wife and child, a detail previously hidden from her. Maya is much more confrontational, needling Danielle in front of others and cutting through her facade with direct questions. Their run-ins feel like the highs to Danielle and Max’s lows, an unsettling roller coaster ride that’s set to crash before long.

Adding fuel to the fire of Seligman’s direction and Sennott’s performance is cinematographer Maria Rusche, who captures the somber tones of a house in mourning with all the trappings of a family nightmare one can’t seem to escape. At times, “Shiva Baby” feels like a Luis Buñuel film, where no matter how hard Danielle tries to avoid certain people and break away from fake pleasantries, she’s invariably stuck with this group. The cross-cutting by editor Hanna A. Park heightens the already tense choreography of this claustrophobic gathering. To top off the movie’s apprehensive spirit, Ariel Marx's string-heavy score layers on a final helping of uneasiness in Danielle’s mind, as plucked chords and strained notes accompany her inner chaos.

“Shiva Baby” is a tightly wound movie, with almost every minute dedicated to some kind of moment of strife. The script is packed with several rounds of fast-talking in-fighting, but that rapid fire pacing feeds the contrast between those scenes and the movie’s moments of awkward silence, which become even more painful to watch. As a team, Seligman and Sennott share a spot-on sense of comedic timing, knowing just when to throw in the next cutting remark, eye roll, or fake smile. They hit bullseye each and every time, all the way to the credits. 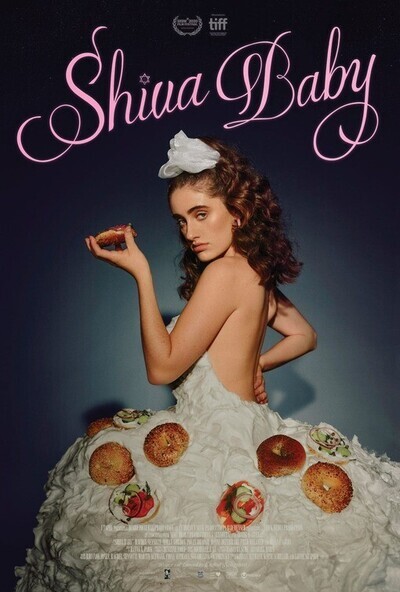