A somber drag, “Settlers” is the kind of movie that should check all the boxes for me. Perhaps it’s the theatre major in me, but I’m more drawn to single-set pieces than a lot of critics, and I’m equally kind to genre work that tries to blend big ideas into small budgets. With a strong cast and an intriguing premise that basically transports a Western plot into outer space, “Settlers” should work, but it simply sags in the middle, only barely sparking to life again in a more suspenseful final act. By then, it’s too late as any emotional connection to these characters or their fates has blown away with the dust that dominates the color palette of the film.

Writer/director Wyatt Rockefeller’s film opens with a family on the surface of Mars, one of the early colonizers of an inhospitable place after Earth finally kicked humanity out. Reza (Jonny Lee Miller) and Ilsa (Sofia Boutella) are raising nine-year-old Remmy (Brooklynn Prince) on this lonely planet, but it’s clear from the beginning that danger lurks over the horizon. They may be alone in their habitat, but someone (or something) wrote “LEAVE” on the window, and from the other side, and mommy and daddy don't let their daughter go outside at all. As Reza and Ilsa’s fear grows, Remmy discovers the truth about what’s out there, and even who is already inside.

Without spoiling, early in the film, another human enters the picture in the form of a man named Jerry (Ismael Cruz Cordova), and it’s initially unclear what role he will play in Remmy’s life. Is he a father figure or something darker? Is he there to save them or tear them apart? Before the movie's end, Remmy has grown to be played by Nell Tiger Free, and the dynamic shifts yet again in Rockefeller’s script, one that feels like it intends to comment on how the deceptive nature of man will hold true even when he’s not on Earth but never quite forms its themes into something cohesive or moving. And then the final act becomes particularly brutal, intensifying the thriller elements but not in a way that feels organic (even if it's nice to finally see the movie pick up its leaden pace).

Rockefeller seems to have more gifts as a director of performance than he does as a writer because his cast is effective, especially the two young women who play Remmy. Prince has proven that she is much more than a one-hit wonder after her breakthrough in “The Florida Project,” doing effective work on Apple TV+’s “Home Before Dark,” and she’s quite excellent here. Coincidentally, Free also delivers on an Apple TV+ show (“Servant”) and she too carries her half of "Settlers." The adult performers are forced to play more games with their characters, holding back secrets and motivations for the sake of suspense, but Free and Prince work to elevate the film emotionally as best they can.

Which, in the end, doesn’t make it memorable. Every time “Settlers” felt like a literal Western—there’s even a robot ‘dog’ that follows our heroine around like one would on a farm in a John Ford movie—I noted the genre gamesmanship but it felt more academic than exciting. After all, Rockefeller hasn’t made the first Space Western, by any stretch. Like his half-baked themes, the genre-bending doesn’t feel like it's really saying anything or in the service of effective drama. In the end, “Settlers” is another reminder that human beings will lie to and betray each other no matter where they call home. Don’t settle for that alone. 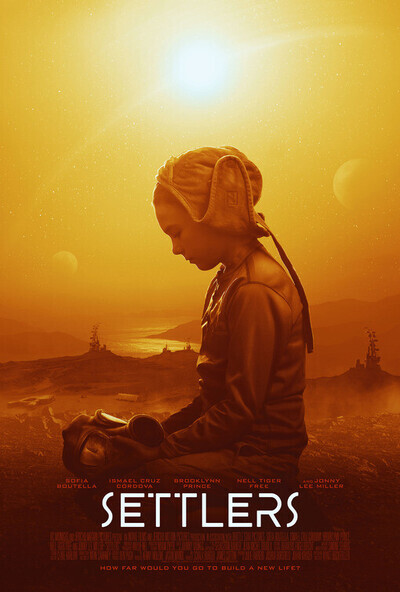