“Sergio” is the kind of film I like to call a “Lazy Sunday Afternoon Movie.” It evokes the flicks that ran on the independent New York City channels back in my younger days, often when the Sunday baseball games were rained out and a substitution was required to fill air time. It was easy to get caught up in these enjoyable movies back then because they had everything—and what else were you going to do anyway? There would be adventure or war, an important message or two and a love story that was either beside the point or the actual point itself. Occasionally, these elements were presented, as this Netflix production is, in the misbegotten format known as the biopic. Since most of this stuff was old studio system fare, the real-life subject was usually a larger-than-life “great man” of some type.

The Sergio of this film is Sérgio Vieira de Mello, a top UN diplomat whose work in East Timor and Iraq form the basis of Craig Borten’s script. Director Greg Barker also tackled de Mello’s story in a 2009 documentary, also called “Sergio” and unseen by me. However, until the obligatory biopic last scene showing of the real thing, de Mello is played here by Wagner Moura. Moura is in almost every frame, and though he’s trapped under an inescapable amount of rubble for a fair amount of the film, he still gets to be strategically heroic, tragically flawed and wildly romantic. It’s an acting dream part and Moura’s more than up to the challenge. “Sergio” starts with what looks like a UN recruitment video starring de Mello and ends with real-life footage of Kofi Annan honoring his fallen colleague on CNN.

With its numerous scenes of negotiation and occupation in places like East Timor and Baghdad, one would expect a lot of political commentary from “Sergio,” especially with the appearance of Bradley Whitford as Paul Bremer, President George W. Bush’s envoy to Iraq. Instead, that aforementioned love story becomes the primary focus here. Before the film starts hoping around between countries and subplots, we meet de Mello’s co-worker, Carolina Larriera (Ana de Armas) in Baghdad’s UN Headquarters. The way the duo look at each other, it’s clear they’re romantically involved, but further explanations will have to wait: The Canal Hotel suicide bombing soon puts de Mello underneath a massive pile of debris, pinning him alongside his co-worker and self-proclaimed conscience, Gil Loescher (Bryan F. O’Byrne).

From here, “Sergio” bounces between locations and timeframes, presenting scenes like Carolina’s meet-cute in East Timor and confrontations with Bremer, then always returning to the post-bombing present. It’s somewhat annoying until you realize that the film is being presented as de Mello’s life flashing before his eyes as he moves closer to death. The illogic of some of these juxtapositions, and the lack of penetrative depth in some scenes suddenly makes sense; if you thought you were going to die, your thoughts would probably trend toward fleeting triumphs, meaningful conversations, important geographical locales, moments of regret, and your most passionate interludes of lovemaking with the person who owns your heart. Reframing the film in this manner makes it far more dramatically satisfying, but that doesn’t mean it’s any less sloppy; there were moments where the editing made me unsure who was having the flashbacks.

As Carolina, de Armas is given more personality than the usual “great man biopic” requires of the “love interest.” She has a quick wit and a way with biting dialogue. She and Moura have a lot of chemistry together and her star power is on full display in a late scene that serves as a callback to one of the first pieces of dialogue we hear from her. In the replay, we see Carolina deliver the lines to the camera, and de Armas works her close-up with a teasing, coy glance that’s utterly bewitching. If this is what Sergio sees when he looks at Carolina, it’s completely understandable how much she’s on his mind in his last moments. The two of them are convincing enough to survive the film’s big romantic gesture, a scene of reconciliation that takes place in a room that looks designed by a fourth grade class rather than a grown man trying to woo back his beloved.

Eventually, “Sergio” has to end with the post-bombing situation that it keeps returning to between flashbacks. Barker creates a palpable sense of dread and claustrophobia, using darkness and the voices of Moura, O’Byrne and the two first responders to heighten the tension. Above ground, we see Carolina’s anguish as she awaits news, culminating in one final romantic gesture that’s notable for the weird way it is shot. It’s a clear grab for the audience’s emotions, proving once and for all where this film’s true intentions lay. It’s as if Barker’s saying “if you want to work your brain, watch my documentary. This one’s for your heart.” It’s for lazy Sunday afternoons, too. 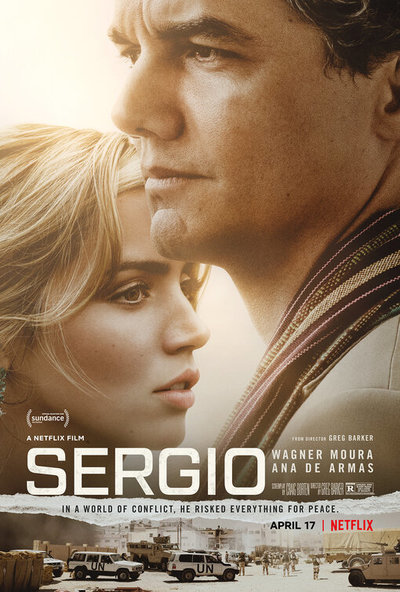 Rated R for language, some bloody images and a scene of sexuality.

Will Dalton as Andre Valentine