The meta-horror-comedy “Scare Package” is on the short list of horror anthology movies whose brief, self-contained segments redirect viewers back to its goofy, bloated wraparound narrative. “Scare Package” features seven short segments, each one directed by a different set of young comedians and/or filmmakers, like “Mystery Science Theater 3000” star Baron Vaughn and character actor Noah Segan. But “Scare Package” still inexplicably concludes with a 30-minute-long wrap-up to its recurring wraparound story about Chad (Jeremy King), a clueless video store clerk whose mastery of horror trivia fails him once he’s dropped into a slapped-together pastiche of horror movie cliches. This tiresome anticlimax, directed by Aaron Koontz and co-written by him and Cameron Burns, only repeats the movie’s already tired joke: it’s fun to recall and riff on tired genre tropes, but what happens when you outgrow video store cynicism/nostalgia, and try do your own thing?

“Scare Package” has no good answers to that admittedly loaded question, nor any really good jokes or cogent thoughts about why its filmmakers love post-“Scream” slasher movies. Several segments are only ostensibly loving tributes to the studio-mandated tics that became entrenched in the horror genre thanks to the pop dominance of ‘80s slasher franchises like “Friday the 13th” and “Halloween.” So there’s a lot of talk about “final girl” survivors, as well as a plethora of generic masked killers who either won’t die, as in a segment called “The Night He Came Back Again: Part IV-The Final Kill,” or can’t even get their foot in the door, like in “Girls' Night Out of Body.” There’s also a nebbishy supporting character named Mike (Jon Michael Simpson) who, in writer/director Emily Hagins’ “Cold Open,” tries to break out of the corner he’s been painted into—“These instructions tell me to do bad things, and then get out of the movie. That's my job.”—and snag a more central role. Hilarity ought to ensue, but somehow never does.

Your mileage may vary when it comes to this sort of pandering humor, but that doesn’t make “Scare Package” more clever or less janky. Most segments are so short that their creators barely establish and then mildly frustrate a basic set of expectations. In “M.I.S.T.E.R.,” a timid man (Segan) joins an incel-type meet-up group, but is inevitably revealed to be less of a good guy—or “Nice Guy”—than he seems. And in “Girls’ Night Out of Body,” three adult women are possessed by a haunted lollipop during a slumber party, complete with facial masks and boy talk, before a generic killer tries to interrupt their fun.

These segments don’t really “subvert a different set of horror tropes,” as the movie’s press notes suggest, but they do establish a defensive, desperate-to-please tone. In “One Time in the Woods,” a disposable meat puppet (Carlos Larotta) is eviscerated, with an immodest fart-like sound effect, by a masked killer while a sentient pile of green goo provides commentary: “Oh, that's disgusting!” And in “So Much To Do,” a spoiler-phobic woman (Candice Thompson) brawls with an undead spirit (Aaron D. Alexander) who possesses her and then tries to watch her favorite TV program. Yes, I hate the self-conscious/referential nature of modern pop culture, and the infantilizing ways that we’re encouraged to engage with it, as one character spells out when he tells Chad that "You're like the personification of what the Internet did to film criticism.” But can you guys please stop elbowing me in the ribs, and workshop your material a little more?

Koontz and Burns save the worst of “Scare Package” for last, when they build an entire segment around Chad’s sad attempts at second-guessing his way through a body count-type scenario, featuring a side character who wonders aloud if he is secretly a “final boy,” and a by-now well-spoiled cameo from a prominent horror movie celebrity (if such a thing exists). This segment is so insulting, both in terms of its execution and ideas, that it only effectively suggests that our understanding and appreciation of anything—even a cult-friendly movie genre that, over the course of the last 40 years, has become as mainstreamed and commodified as the horror genre—is only as good as its ideas. There aren’t many to speak of in “Scare Package,” which wouldn’t be so bad if the movie’s comedians were funnier. There’s nothing in this movie that wouldn’t be funnier if you described or even acted it out, alone, in the privacy of your home, where nobody else can see you. 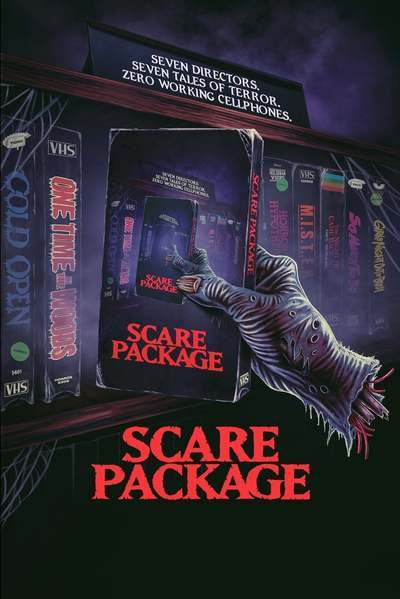