The 2017 documentary "Kiki" showed the world of the underground ballroom scene in New York City, where the different neighborhood clubs are safe havens for LGBTQ youth, often kicked out of their homes and living on the streets. The "scene" had already been profiled years before in the 1990 film "Paris Is Burning," the same year Madonna brought "Voguing"—the exaggerated catwalk-inspired dance style fostered in the clubs—to the mainstream. Now comes Damon Cardasis' feature film debut "Saturday Church," a fictionalized depiction of the "ballroom" scene in New York, and how it operates as a safety net in a cruel and indifferent world. In the film, a lonely teenager finds unconditional love among the denizens of one of these clubhouses, hosted every Saturday in a Greenwich Village church. Punctuated by songs (co-written by Cardasis and Nathan Larson) and dance interludes, "Saturday Church" is a sweet film with a purity of purpose and intent, elevating it above other films portraying similar struggles.

Young Ulysses (newcomer Luka Kain) lives with his hard-working mother Amara (Margot Bingham) and younger brother Abe (Jaylin Fletcher) in the Bronx. Ulysses' father was killed in combat, and the opening scenes of the film show a family dazed with grief. Because Amara takes on more work to compensate, she asks Aunt Rose (Regina Taylor) to help out with the kids. Ulysses is bullied at school for being effeminate, and—even though he's been told not to—he can't stop himself from sneaking into his mother's closet and trying on her shoes. Aunt Rose lets him know in no uncertain terms that she will not stand for this: "You are a man. Start acting like one." Rose signs Ulysses up to be an acolyte at their church. The message is clear as can be: "My love for you is conditional." In other words, it's not love at all.

Fleeing the stress at home, Ulysses takes the train down to Greenwich Village, where he wanders around aimlessly, staring at the people who come out of gay bars, trailing along after them. During one of these field trips, he ends up on Chelsea Piers, where he meets a group of gay and transgender people—Ebony (Mj Rodriguez), Dijon (Indya Moore), Heaven (Alexia Garcia), and Raymond (Marquis Rodriguez)—who take him under their collective wing, and drag him to "Saturday Church," run by a trans activist named Joan (Kate Bornstein) who feeds and clothes the kids, helps with medical care, and provides them with a safe space, if only just once a week. Ulysses looks around him, agog, at the kids dancing, laughing, talking, and just being. The people Ulysses meets are older than he is (but not by much), and they razz him, but also support him. He is drawn to the gently flirtatious Raymond and the feeling appears to be mutual. Here, in this tribe, Ulysses can be himself. How could he ever explain any of this to formidable Aunt Rose? Or his mother, who has also made it clear she doesn't want him wearing her shoes?

It might have been better to start off the film with a musical number, just to establish the genre from the jump. As it stands, the first number in "Saturday Church" comes almost 20 minutes in, and it features Ulysses and his four tormentors at school transforming into a dance troupe, the boys catapulting off the surrounding lockers, or carrying Ulysses above them, and the whole sequence is beautiful, awkward and earnest. (Loni Landon did the expressive choreography.) Ebony's "Conditions of Love" is an interior soliloquy which morphs into a group number, the kids at Saturday Church dancing in a reverie of connection all around Ulysses. There's a beautiful number in a homeless shelter when people lying on the floor rise up out of sleep into a group dance. Amara's "Come Sun or Come Rain" is an emotional reassurance to her troubled son that she will always love him. The numbers that work best are those that come from a symbolic and almost abstract place (homeless people rising into a ballet, bullies transformed into a chorus line), where characters inhabit a dreamspace transcending horrible circumstances.

In musicals, people sing when emotions are too strong for regular speech. All of these songs are performed with an urgent need to express, and it is that urgency I remember, not the tunes or the lyrics. There's a rough kind of poetry to these sequences, and they're key to why "Saturday Church" works (and why it will probably work really well with a young audience). They come straight from the heart.

Young Luka Kain is a transparent young actor, open and accessible. When his heart is broken, you can feel it. The people who play the posse at Saturday Church have varying degrees of acting experience, and it shows, but the group vibe is roughly affectionate, the trash talk humorous. "Tell me that's not some Taraji P. Henson shit right there." "I don't do K-Mart." "I'm thinking of upgrading my look to Melanie Griffith in 'Working Girl.'" Margot Bingham turns what could be a thankless role into an insightful portrait of an overwhelmed mother trying to do what's best, but making a huge mistake in dealing with her son's gender identity. She does not realize that placing conditions on her love will be ruinous for him. Playwright/actress Regina Taylor is fearless in showing the ugliness of the unthinkingly devout, the contempt hiding behind "Hate the sin, love the sinner." Ulysses is a stand-in for all LGBTQ teens, and his experience shows how at-risk they are. If it weren't for the clubhouse scene in New York, many of these kids would never get a hot meal at all.

In the epic poem The Odyssey, Ulysses takes 10 long years to find his way home (the famous "nostos") after the Trojan War. He has been gone for decades, but the thought of home obsesses him, keeps him going. "Saturday Church"'s hero—and namesake—may not inhabit a world quite as epic, but the journey is the same. Damon Cardasis' film would make a great companion piece to "Paris Is Burning" and "Kiki," and it shows the importance—in some cases, life-or-death importance—of creating your own family, and finding your own home. 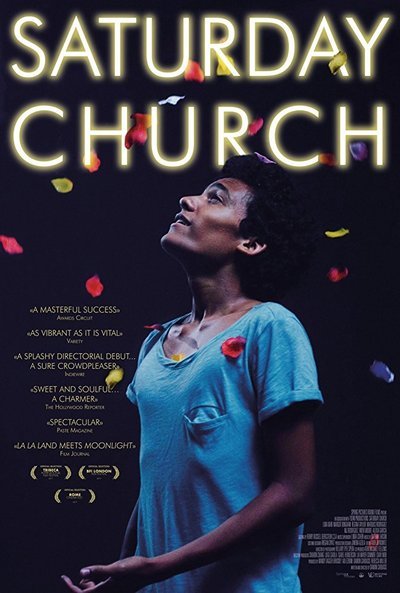