"Samba" (the latest by "Intouchables" writing-directing team Olivier Nakache and Eric Toledano) is a bizarre, uneven, and strangely charming movie about the bureaucratic nightmare that is illegal immigration in France (and elsewhere, of course, but this is a French story). It's an explosive topic, with multiple layers of complexity and ugliness (xenophobia, racism), all of which is acknowledged in "Samba," but in a muted way, highlighting the absurdity of the immigrant experience as opposed to the cruelty of it. "Samba" is two stories shoehorned into one: a very serious topic handled in a slapstick way. Some viewers may find this jarring or offensive, and it doesn't work a lot of the time, especially when the film attempts to address the despair experienced by law-abiding immigrants just trying to make enough money to send home.

Samba (Sy) hails from Senegal, and has lived in France for 10 years, working as a dishwasher. The film opens with a long single shot, moving from an elaborate party in a luxurious hotel through the hallways, through the bustling kitchen, and finally into the back room, where we find Samba and others, washing dishes. The shot takes us from a world that is 98% white to a room where everyone is black: a visual choice that tells the story clearer than any language could.

Samba has a positive attitude. He has plans for the future, which are derailed when it is discovered his residency papers are not in order. He is placed in a detention center with other illegal immigrants. It is there that Samba meets the shy and incompetent Alice (Charlotte Gainsbourg), a volunteer social worker, new on the job. He asks if she has any sleeping pills. She dumps a veritable pharmacy out onto the table and hands some over. Alice has been warned to never give out her home phone, stay detached. She breaks all of those rules in the first meeting. Alice is assigned to handle Samba's case.

When Samba is released from the detention center, he does so with an order to leave France immediately. As he walks down the front path of the center towards the gate, a plane zooms down the runway at the airport opposite and he shouts to the people watching him go, "Okay, that's my ride! I'm leaving! That's my plane! See? I'm leaving!" As silly as that might sound (or as offensive, depending on your point of view), it is in those destabilized moments, where comedy is the response to a tragic situation, that "Samba" works. Sy makes Samba's positivity and humor a real thing with practical applications, a survival skill. The stakes could not be higher for him, but he utilizes his charm and smarts and sense of the absurd in order to make it through the day.

Samba gets odd jobs with his best pal, an immigrant from Brazil named Wilson (the fantastic Tahar Rahim). They work construction, they wash windows. There's a teasing honest energy between the two men. Some of the scrapes they get into (and there are many) could be subtitled "The Kooky Adventures of Two Charming Handsome Immigrants" and a little of this goes a long way. They talk about women, sex, they talk about their lives and goals, they talk about how they don't want to go back.

A bumbling romance develops between Samba and Alice. Alice is on break from her heavy-duty corporate job. She has anger issues, and self-loathing issues, issues that one can only afford to have when operating from a place of safety and privilege. (There's a great moment in Albert Maysles' final film "In Transit": two strangers have struck up a conversation on a long-distance train ride. One of them describes a friend who changed his life because he was "in transition" and the guy across the aisle almost laughs out loud. He says that only rich people can afford to be "in transition," the rest of us are too busy for that nonsense.) "Samba" would have benefited greatly with a more frank acknowledgment of the disparity of their positions. And ogling at the gorgeous body of an immigrant while he's behind bars is pretty gross in a bald-faced way.

Gainsbourg overplays Alice's awkwardness, indicating it rather than inhabiting it, but the bond between these two misfits, thrust out of their comfort zones, does have its own sweetness. One of the reasons the love story is successful (to whatever degree it is) is because it is not presented as "the greatest love the world has ever known" or "a sweeping epic romance." It's a halting and inarticulate dance between two people drawn to one another because of the given circumstances of their lives at that particular moment.

There are comedic moments: a montage of the chaos at a local immigrant social center, the language barriers, the harassed workers, the long lines, the frustration of red tape. One scene where Wilson and Samba flee from the police, involving a precarious escape across the slanted roofs of the neighborhood, is at first hair-raising and then hilarious, as Wilson teases Samba about his fear of heights. Wilson is an enthusiastic ladies' man, causing the more subtle Samba to roll his eyes behind his friend's back. There's a wonderful scene after a party at the local immigrant center, where everyone drinks wine and talks about their hopes and dreams for the future. The scene feels "caught" as opposed to "acted," the behavior fresh and spontaneous, the interactions natural.

Omar Sy is a star in the truest sense of the word. In 2013, The Guardian called him "the hottest French film star of 2013," due to his role in the smash-hit "Intouchables". But lots of actors are called "the hottest new" this or that and their acting doesn't justify the hype. Their star-status is a matter of targeted publicity and orchestrated hyperbole. What is it that makes someone a star? There's that indefinable essence stars have, a charisma, an ease, a beauty palpable to the camera, and an ability to let an audience into their inner lives. You know it when you see it; it can't be counterfeited. An actor has to just have it and Omar Sy has it. One needs only to watch his performance in "Samba" to see Sy's old-school natural star power in its purest form. He's the perfect leading man. He's funny (without straining for jokes), he's truthful, he's vulnerable, he's strong. "Samba" doesn't quite work, but the parts of it that do work are due to Sy (with a little help from Rahim). The "romance" and "comedy" of the genre are present because Sy brings them to life. He almost singlehandedly justifies the film's existence, and that is something only a star can do. 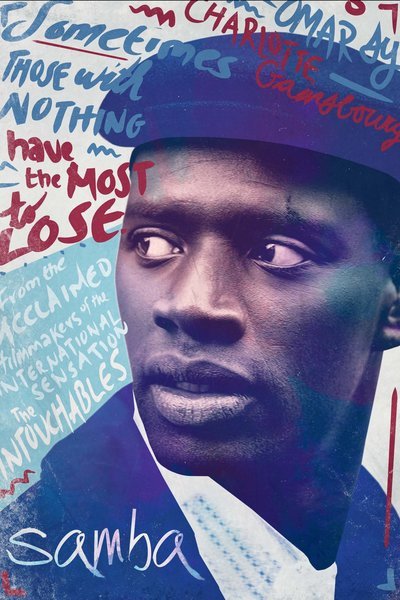