James Franco's "Sal," a film about the last day in the life of 1950s teen heartthrob Sal Mineo, was made in 2011, and it is only now getting a token release. This is Franco's fifth feature as a director, and in the two years since he shot it in nine days he has made four other features, two documentaries, and two shorts while continuing to act in movies and write short stories and put together art shows. In the fourth feature he directed, "The Broken Tower," Franco cast himself as the great American poet Hart Crane and made a dreamy black-and-white hash of Crane's life, filled with student film visuals and dorm-room philosophizing. It was a disgraceful movie, disconnected from any but the most superficial understanding of Crane's work and life, and Franco has only somewhat better luck with "Sal," a film about a likable but minor actor and icon.

"Sal" opens with actual news footage of Mineo's 1976 murder, which is followed by a lengthy sequence in which Mineo (Val Lauren) strenuously works out. This is followed by a long lunch conversation between Mineo and a man he wants to produce a movie he is angling to direct. It becomes clear in this scene that Franco is going for realism, but what winds up on screen are formless conversations that don't sound much like people talking but do sound like unprepared actors just winging it and trying their best. Lauren looks and sounds enough like Mineo to be acceptable in the role, but the film gives him very little to do and very little to play. "Sal" would be a bad movie if it shoehorned in exposition on Mineo into this last day of his life, but by keeping almost all exposition at bay Franco makes a film as morbid as Gus Van Sant's "Last Days," where all we do is wait through uneventful hours with the protagonist until their foreordained death comes as a kind of finale and release.

We see Lauren's Mineo talking on the phone a lot, trying to get people to come and see a play he's rehearsing, "P.S. Your Cat Is Dead!" He complains about his co-star Keir Dullea (Jim Parrack) and says, "Keir Dullea, gone tomorrow," a Noël Coward quip that is not credited to Coward. Is Mineo supposed to be just passing it off as his own joke? Toward the end of the film, after we have seen a long rehearsal of the play, Mineo actually makes this joke to Dullea's face, but he gets no response. Certainly the rehearsal of the play is more interesting than all the scenes where we watch Sal drive, or Sal go to the doctor, or Sal talk to his actress friend Jill Haworth on the phone, but "P.S. Your Cat Is Dead!" looks so awful that any "Mineo could have been a contender" vibe gets shut down.

Mineo was gay, and fairly open about that fact. He had played maybe the first gay teenager in an American movie, Plato in Nicholas Ray's "Rebel Without a Cause," and Plato needs to be killed off in that film because he is seen as too different and too disturbed to survive. Mineo, on the other hand, was stabbed to death because he was in the wrong place at the wrong time. The film ends with footage of his corpse on the sidewalk, and then a scene from "Rebel." From the first footage of the newscast on Mineo's death to this last tasteless film of his body lying in the street, nothing much has been learned about Mineo.

Franco gave probably his best performance in the TV movie "James Dean," and so maybe that's why he wanted to do a film about Dean's "Rebel" co-star Mineo, but that isn't enough of a reason to make a movie. Who was this film made for? Particularly hardcore Sal Mineo fans? For all his activity, Franco is still an amateur filmmaker, a hobbyist who vacuums up gay culture for no clear reason or purpose. The most that can be said for "Sal" is that at least Franco's small sensibility fits the smallness of his subject, whereas he should know enough by now to leave literary giants like Hart Crane and William Faulkner alone (his film of Faulkner's "As I Lay Dying" is also getting a token release this year). If Franco could be made to understand that just because you can do something doesn't mean you should do it maybe we could stop or at least stem the tide of his arbitrary projects like "Sal." 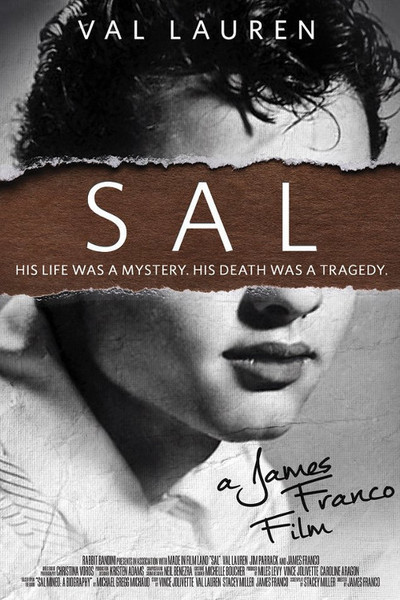