Most films based on a true story show you the real people’s faces during the end credits. It’s one of the goofier victory laps for these kind of movies, and I’ve even seen it irritate some of my film critic peers. And yet “Safety” does it all one better—it features a long clip from the “Oprah” segment about its true story of a Clemson University freshman named Ray Ray McElrathbey (played here by Jay Reeves) who sneakily took care of this 11-year-old brother Fahmarr (Thaddeus J. Mixson) on campus back in 2006, while also trying to juggle his studies in psychology, and the growing pressure of playing football on scholarship. This Disney+ film from director Reginald Hudlin plays out like it's not adapting the real story, but the "Oprah" episode about it.

Here is a good movie, with a good heart, even though you don’t trust the screenplay. For the incredible set-up at the center, it’s told with a lot of cliches, so much that it dilutes their overall impact even if it gives writer Nick Santora's script all sorts of ups and downs. It’s the Disney version of a movie that could easily be awards bait, and you can easily imagine this script going for high drama if it went with a couple bleaker scenes than it has, and didn’t so readily embrace a sitcom-ready lighting scheme. Feel-good doesn’t have to be a point of submission, and yet all of the film's glaring soft edges and place-holding tropes treat feel-good just like that.

But it’s not only the sunny daylight scenes and wholesale jokes that make it so bright. It’s the constant Clemson orange, a color that dominates the story and its purpose. "Safety" is bonafide propaganda for Clemson University and its football program, channeling its true story into a depiction of family that includes burly, soft-hearted teammates who come to support Ray Ray's brotherly drive, and a very PG-rated idea of dorm life in freshman year of college. The Clemson football program comes out of the movie sparkling like a super family, especially with regards to their value of loyalty and sacrifice.

There’s an immense stress at the true center of this story, as the "Marshall" and "Great White Hype" director Hudlin is essentially making his own version of “The Pursuit of Happyness,” in which Will Smith played the real-life Chris Gardner, who tried to juggle fatherhood and being homeless while working as a salesman. (To make this connection, Hudlin also includes a brief needle drop of Smith’s version of “Just the Two of Us,” the music video that featured Smith and his son, Jaden). Ray Ray has filled over the parental void left by their mother, who has gone to rehab after a prison stint. When Ray Ray initially leaves Clemson to check in on Fahmarr in their Atlanta apartment, he's hanging out with some sketchy older dudes, and in danger of going to a foster program. Ray Ray decides that he'll take his brother with him to Clemson, and get him into a middle school there, and hope that his coaches, or the geeky R.A., don't catch him. With everything else going on in his life, including a relationship he's trying to start with a sports reporter named Kaycee (Corinee Fox), the set-up exemplifies something that feels relatable, but is slackened here: I don't know how, but I'll figure it out.

“Safety” doesn’t go deep into that pain, or the clear sense of loneliness that Ray Ray would have in a situation where he has to juggle so many things, and lie about his background. When Ray Ray meets two older white alumni members, he lies to them about his mother being absent, saying that she travels for work. They flash him a pleasant smile, unaware of his inner turmoil in the following shot. The expression on his face is only given so much time before the Hudlin's Disney movie goes to the next thing, and deals with it later in passing. When the secret's out and more people try to help him, Ray Ray protests to Kaycee that "I'm not a charity case." The movie doesn't treat him like one. But it doesn't go into what's inside of him, so much as recognize it and move on.

This light handling of a heavy subject keeps the tone off for a good while. When the school does its own part later on to provide family, it’s a sweet gesture that also functions as "Safety" moving away from its honest toughness. It becomes more and more obvious that the two image-driven entities that are clearly influencing this story—Disney and Clemson—are also holding it back.

Instead "Safety" jumps at the chance for shenanigans comedy, and creates some sugary-sweet jokes about how how Ray initially has to hide Fahmarr inside his dorm room. He gets some help from his very Italian roommate Daniel (Hunter Sansone), who is such a stereotype of a modern Italian guy that he has a poster of Italy on his dorm room wall, and offers Ray lasagna when they first meet. Like with this character and other tropes of team work, tough guys, and quietly wise coaches, the story is injected with Disney magic, with Fahmarr being an excitable, sometimes troublesome brother looked over by his older brother. What counts here, more than the story’s hand-holding, is that the two actors have a believable brother chemistry, and share some sweet scenes as they both try to figure out their new life situation. Even if the characters don’t have much to them besides their problems that this film treats with the softest touch possible, they’re given a certain life by Reeves and his younger on-screen brother Mixson, respectively.

Comfort gruel like this comes down to its director, and Hudlin shows his energy and presence throughout the movie. You can spot him looking for an exciting way to shoot football action in first-person, or shake up a "wake up every morning" montage (I loved a shot where a flying camera arcs in the air like a thrown football, but in a dorm room). Every now and then a strange detail will pop, like how Ray Ray and Kaycee are shown cuddling up on the couch watching ... the scene where John Goodman frantically rips himself out of the mud in "Raising Arizona" after a jail break. And for a movie that is pretty good with its 2006-era soundtrack (Fat Joe's "Lean Back," Trick Daddy's "I'm a Thug,") a middle school dance scene for Ray Ray is built around, of all songs, Whitney Houston's 1992 cover of "I Will Always Love You." If nothing is going to be challenging about this movie, at least it clearly has an interesting mind behind it.

You know a movie like “Safety” as you see it, and as you hear it. When a character says, “This right here is a Hail Mary … and I don’t think we’re gonna win this one,” your eyes may roll, but it's clearly more dressing for the Disney version of McElrathbey's experience. This is an inspirational movie in the broadest sense. You have to squint a lot to see the true story within it, but it's there. 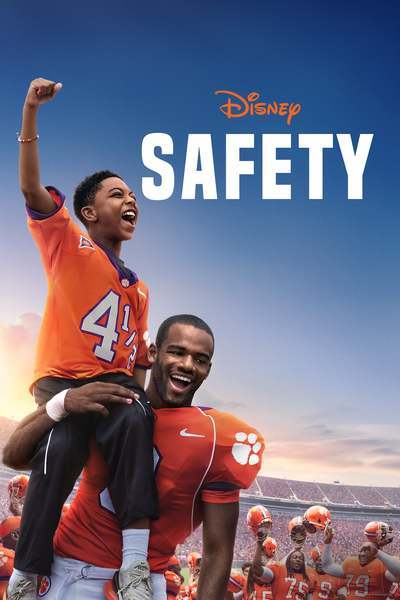