“Running With Beto” is a fly-on-the-wall documentary following Beto O’Rourke’s highly publicized, richly funded effort last year to unseat incumbent U.S. Senator Ted Cruz from the Republican stronghold of Texas. He didn’t win, but he came awfully close, and he shook up the complacent notion that Texas is inevitably a red state.

The former El Paso mayor and congressman runs from county to county across the massive state, famously hitting all 254 of them, and he runs on coffee and the occasional donut crammed into his mouth while driving between campaign stops. Sometimes we are literally running with Beto, too, joining him as he steps out the front door of his Washington D.C. townhouse and goes for a morning jog toward the Washington Monument. He’s young, long and lanky at 6-feet-4, and his boyish exuberance is a major facet of his appeal.

“Running With Beto” essentially does in feature-film form what O’Rourke himself did in his embrace of social media throughout the campaign, when he would live stream the seemingly mundane events of his daily life. The first images we see are of him piling into the SUV with his wife, Amy, and their three kids, adjusting the smartphone on his dashboard to make sure he’s getting the shot right. Here he is putting gas in his car. There he is getting a haircut. His authenticity is also a huge part of his appeal—along with the fact that he freely drops F-bombs in conversation and says things like: “Cool, it’s gonna be fun.” He is one of us—or at least, he’s what we aspire to be and be near, with his boundless enthusiasm and a brand of hope reminiscent of Obama and JFK.

But there’s an inescapable undercurrent to director David Modigliani’s film. It’s not the fact that O’Rourke lost in 2018, which we know at the outset. It’s that it’s impossible to watch it without viewing it through the prism of current presidential politics, where O’Rourke is among about two-dozen Democrats vying to run against President Donald Trump in 2020. He entered the field with a big splash and great expectations, but has faltered somewhat as more probable contenders have joined the race. Of course, we’re a long ways away and a lot can change between now and Election Night, but you still get the feeling that “Running With Beto” functions somewhat as a time capsule at a time when political fortunes can change at the speed of light.

Still, Modigliani effectively conveys what it is about O’Rourke that made him so exciting in the first place, especially through the eyes of the handful of volunteers and activists whose efforts he also follows. They include a lesbian Latina who engages in polite but firm debate with her conservative stepfather and a group of teenagers from Santa Fe, Texas, whose high school was the site of a massive, deadly shooting in May 2018. We see the candidate listening intensely to their concerns about gun control and taking notes, and his sincerity and empathy are palpable.

Over the course of a year, Modigliani reveals how O’Rourke went from chatting with a few skeptical folks at small-town restaurants to filling stadiums full of the faithful. From Dallas to McAllen and everywhere in between, he knocks on doors and refuses to take PAC money, and increasingly the number of people interested in hearing and helping him becomes legion. Tweets of support from the likes of LeBron James and Julia Louis-Dreyfus and appearances on Ellen DeGeneres and Stephen Colbert’s talk shows further cement his rock star image—never mind the fact that he actually played in a punk band in his youth, which he argues quite convincingly is part of what qualifies him for the U.S. Senate. And while he’s more about personality than policy at this stage, his criticism of the Trump administration’s child separations at the border and his answer to a question about NFL players kneeling during the National Anthem earn him even more attention, both positive and negative.

“Running With Beto” is an intimate, thorough look at a candidate on the rise and on the go. He seems to have unflagging energy: smiling, hugging, shaking hands. It’s easy to see the allure of him. To Modigliani’s credit, though, it isn’t entirely a hagiography. The film shows O’Rourke complaining to his advisers that they’re not keeping him sufficiently apprised about what to expect at each campaign event. It shows a couple of his top aides speaking with surprising candor about O’Rourke’s propensity for finding the smallest fault. And as he’s about to give his concession speech—which he delivers with grace, gratitude and a trademark touch of profanity—he acknowledges to the longtime advisers surrounding him that he hasn’t always been the most pleasant guy to deal with. Only he phrases that with an apt curse word, too.

Then he goes home, after a long campaign and a long night, and makes quesadillas for his kids. Maybe he really is just like us after all. 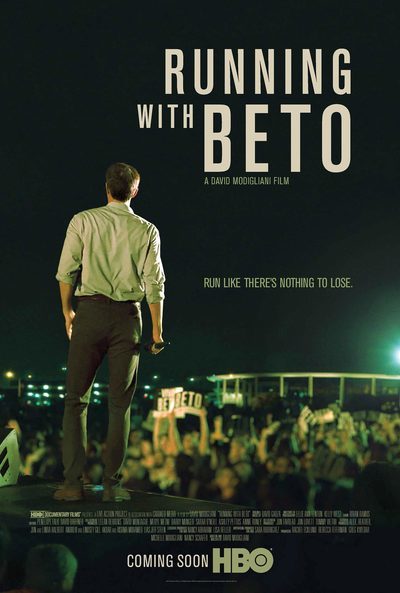 Beto O'Rourke as Himself

Amy O'Rourke as Herself

Cynthia Cano as Herself

Jody Casey as Herself

Chris Evans as Himself