Like many movies chronicling the Millennial experience, “Run This Town” is filled with a kind of quiet despair. Though the film centers on the true story of the spectacular downfall of Toronto mayor Rob Ford, it’s really about recently-graduated young people who find themselves in the midst of this larger-than-life scandal. Each twenty-something protagonist struggles to navigate what have now become standard Millennial clichés: there are few jobs to be found and the ones that are available seem to be a dead-end in terms of career growth; there are impossibly huge student loans that don’t seem as though they will ever possibly be paid back; there is a great fear that young people will never be able to come out of a strange extended adolescence where they are still relying on their parents rather than moving out and starting families of their own; there are jokes about how their generation should maybe just quit the $4 lattes.

This is well-trod territory in 2020, explored richly in any number of TV shows and films, and the choice to center “Run This Town” on Millennial malaise is an odd one, made all the more perplexing by the fact that director Ricky Tollman decided to center his story mostly on two fictional male Millennial characters, rather than the real-life reporter Robyn Doolittle, who spent years covering Ford’s various scandals before finding herself with video footage of Ford smoking crack.

Clearly, Tollman’s reporter isn’t meant to be a stand-in for Doolittle. Bram (Ben Platt) is a completely fictional character, an inexperienced reporter who struggles with the work. He wants to do something big and important but is only asked to write clickbait in the form of goofy lists. When he suddenly gets the opportunity to write about something really big and important, he ultimately botches it. In this way, Bram fits Tollman’s vision for the film, which is less a recounting of the scandal itself than a look at how young people navigate the treacherous waters of making good choices in a world that doesn’t seem to have any moral compass at all. Tollman explores this overarching theme by comparing Bram’s experiences trying to break the story with the story of Kamal (Mena Massoud), the assistant to Mayor Ford (Damian Lewis), whose job involves basically cleaning up after the mayor’s wildly unethical antics, which include bullying, assault, and sexual harassment. He’s an expert spinner who is also increasingly weary of his role in covering for not just immoral, but also illegal behavior. Likewise, the film also looks at how lawyer and press assistant Ashley (Nina Dobrev) is faced with a similar conundrum of whether to report how Ford has been sexually harassing her as well as abusing other workers in the vicinity.

Including all of these various experiences is certainly ambitious, but the screenplay itself isn’t terribly interesting. As a viewer, I wanted to learn more about real-life story of Ford, rather than see so many scenes where characters discuss their more general struggles making strides as adults. Throughout the film, Ford’s behavior, which should be in the foreground of this story, seems to curiously fade to the back. Part of this is because Tollman flattens Ford into a kind of caricature, a #MeToo monster who flagrantly assaults employees and yells when things don’t go his way. Certainly, Ford’s real-life behavior makes it clear that he is not a person with whom the audience should be particularly empathetic, and yet to make a whole movie about Rob Ford without genuinely focusing on his arc as mayor (or a more in-depth look at the city that elected him) seems to be missing a major part of the story.

Upon learning about the movie, Doolittle tweeted her shock and disappointment about being written out of the retelling, “Why have a woman be a lead character when a man could do it?” she quipped. It’s clear when watching the film that Tollman wasn’t in any way trying to erase Doolittle’s work or avoid writing interesting female characters (“Run This Town” includes several female protagonists who are written with sensitivity and depth) but it’s also unclear what exactly was gained by taking out her story in order to re-orient the plot around an inexperienced white, male reporter.

Tollman’s choice is all the more perplexing when considering the ways that his film’s subjects could have been explored more deeply by actually bringing in Doolittle’s story. After all, the tale of how an ambitious female reporter successfully exposed a corrupt mayor would only enhance all the themes that Tollman seems most invested in unpacking—entitlement, corruption, ambition, what it means to take responsibility. These are hugely important issues in our current moment, especially when thinking about the ways that so much journalism seems to be shaped by the drive for quick clickbait over substantial storytelling. By editing out Doolittle, I think Tollman intended to make his story a more concise and elegant treatise on the Millennial experience. Ultimately, the effect was that an ambitious project simply became smaller. 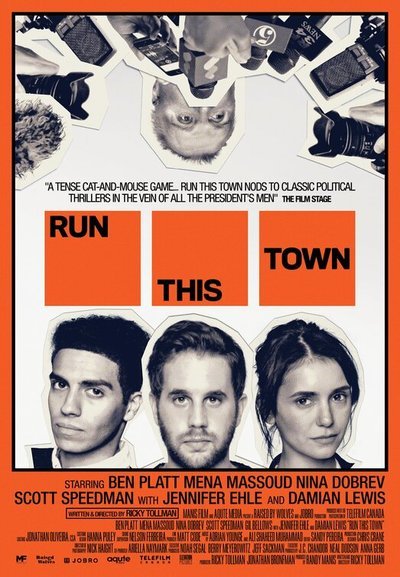