The movie is an attempt to deal with the differences in values and lifestyles between the years 1969 and 1989 - between the summer of Woodstock, and this summer of our discontent. Its screenplay approaches this theme so awkwardly that we want to groan aloud.

Consider this: In the summer of 1969, two pot-smoking draft resistors (Eric Roberts and Cheech Marin) are being pursued by U.S.

Treasury agents. So they go underground. Flash-forward to the summer of 1989, where the same two men, beards now grown down to their waists, live on a commune in the jungles of a small Central American country, where they subsist largely on joints the size of Panatellas.

Their idyll is interrupted when an American agent comes stumbling into their swamp, bearing a briefcase containing top-secret U.S. plans to invade the helpless nation. Roberts and Marin obtain the papers and return to New York to alert America to "another Vietnam," only to discover that life has changed since the days of Woodstock Nation. The changes are illustrated as they look up old friends, including Roberts' 1969 girlfriend (Julie Hagerty, whose performance seems on the edge of a crackup) and the proprietor of a hippie restaurant (Louise Lasser, who manages the neat trick of looking younger in 1989 than she did in 1969).

One of the matters never settled by the makers of "Rude Awakening" was whether their film was a comedy. Many of the scenes involving Marin seem to hearken back nostalgically to the Cheech & Chong drug comedies, but Roberts is intense and serious throughout. And there are passages of cloying sincerity, in which the dropouts are told about all the things that have gone wrong since 1969 (acid rain, AIDS, crack, the hole in the ozone layer . . . this dialogue has to be heard to be believed). Then they attempt to occupy a university building to publicize their top-secret papers, but today's students, of course, are mostly yuppies who couldn't care less. (At the end of the movie, a few committed students do turn up to volunteer their support, but their arrival is slightly marred, for the logical, by the fact that there is no way they could have possibly known where to find the heroes in order to join them.) The actors supply an anthology of styles and approaches. Marin does his patented "wow, man!" routine, which is growing seriously old.

But Roberts, allegedly his best friend for 20 years, is on another level altogether, one of messianic fervor. Buck Henry wanders through, playing his basic movie character (a man who just seems to be wandering through), and there is some excruciatingly bad comedy involving his alcoholic wife and various handguns.

No one in this movie has an adequate intelligence level. The dialogue of the characters is half-witted, their actions are inexplicable, and to the degree that they possess personalities, they are boring, self-important clods. "Rude Awakening" made me wonder if perhaps it wouldn't have been the best idea, after all, to just let the memories of 1969 slip gracefully into the past, instead of dredging them up in a film so ham-handed and politically obtuse that it is an actual insult to whatever beliefs it dimly thinks it upholds. 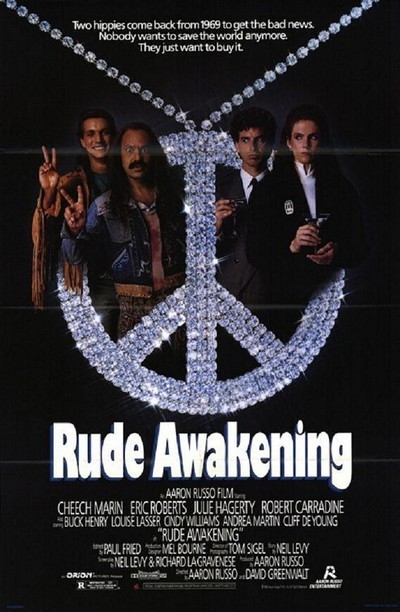