Rocks in My Pockets

Depression is such a personal, intangible, mystifying phenomenon. Signe Baumane tries to make sense of it in unexpected fashion—through colorful animation and dark humor—with “Rocks in My Pockets.”

The Latvian-born artist clearly has poured so much of herself into this film, both physically and emotionally. In her feature debut, she serves as director, writer, animator, narrator, producer and co-editor. Further, she explores her own depression by tracing its origins in her family, through various women who took their own lives all the way back to her grandmother, who was beautiful and bright but lived like a peasant in the woods with a fiercely jealous husband and eight children.

But Baumane also dares to share her own suicidal tendencies—thoughts that crept up and crippled her—and even admits that after she became a mother, she fantasized about hanging herself in the attic: “It made me feel free,” she says. “It made me feel like I had options again.” She was then sent to a Soviet-run mental hospital and locked away with a diagnosis of schizophrenia. That she emerged and managed to thrive as an artist all these years later is a testament to her strength and perseverance.

Such brutal candor might sound shocking, but Baumane’s willingness to open herself up and shine a light on taboo territory is one of the film’s great strengths, and one of its gifts. It takes a while to grow comfortable with her methodology, however.

“Rocks in my Pockets” is a bold, rough-hewn combination of papier-mâché, stop-motion animation and hand-drawn images. It’s bright and richly textured, with sequences that evolve in grotesque and violent ways that are reminiscent of the most frightening segments of “Pink Floyd The Wall.”

But Baumane tends to meander in her storytelling, bouncing around in time as she visits such disparate subjects as history, suicide, education and feminism. And she employs a sing-songy, heavily accented tone of voice, regardless of the subject matter. It’s immediately off-putting and it smothers every second of the film, but eventually you grow accustomed to the narration and it becomes merely grating.

“Rocks in My Pockets” settles down in time, though, and finds a structure as Baumane tells the stories of other women in her family who’ve suffered the way she has. There’s a gorgeous, emotionally distant and overachieving cousin who snapped when she didn’t get into a prestigious university, and the music prodigy who hanged herself.

But the most intriguing mystery surrounds the woman who started it all: Baumane’s grandmother, Anna. Similar to Sarah Polley’s approach in exploring her own family’s history in the brilliant documentary “Stories We Tell,” Baumane investigates Anna’s death with the clear-headed curiosity of a detective, asking aunts and uncles what really happened to her. In response, she gets variations on the same vague answer: She died in her sleep. Or her heart stopped. Or her heart stopped in her sleep. But the way she recounts this woman’s history of hard work and heartbreak in Soviet-controlled Latvia is both amusingly twisted and achingly sad.

“Rocks in My Pockets” offers a lot to process, both visually and emotionally. It’s an exhausting experience at just under 90 minutes, and it might have been more powerful in shorter form. The fact that it offers hope at the end—for Baumane herself and for anyone who has suffered similar torment—is an enormous relief.

A Glitch in the Matrix

The Lady and the Dale 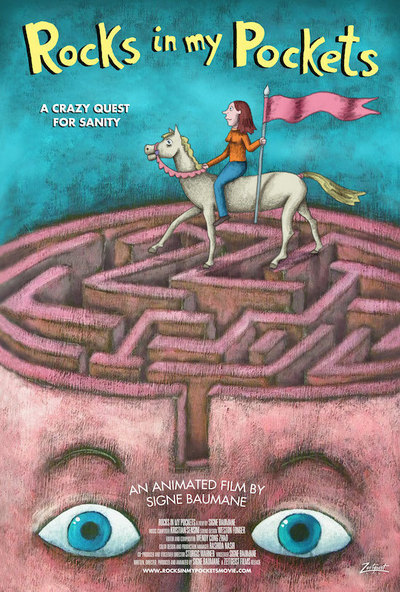