You could build a suspension bridge over the gap between what "Robin Hood" could have been and what it is. Its hero is credible as a man who wants to rob from the rich and give to the poor, but the storytelling is so impoverished that the message can't stick.

"Robin Hood" is a malleable tale, but the core is always the same: a cocky underdog fights the power on behalf of mistreated citizens. This new version from director Otto Bathurst ("Peaky Blinders") captures the heart of the legend, but frustratingly fails to translate it. Bluntly political and surprisingly coherent in its messaging, the movie is filled with deliberately modern details signaling that it's a folktale aimed at modern multiplex audiences, closer to a science fiction or fantasy epic than a "Barry Lyndon"-style "accurate" representation of life in another era. If the filmmaking and writing weren't so undistinguished, this could have been special. Instead, it's a flat and often grating experience, dotted by pockets of intelligence and surprise.

This incarnation of Robin of Locksley ("Kingsman: The Secret Service" star Taron Egerton) is a traitor to his class—a veteran of the Crusades who is literally to-the-manor born. He battles the cruel and corrupt Sheriff of Nottingham (Ben Mendelsohn) after returning home and realizing that the bad guy has taxed his community into oblivion to fund the war effort. Robin is joined by the Saracen Little John (Jamie Foxx), who becomes his friend and mentor after Robin risks treason charges to save John's son during the Crusades.

Robin, John and their allies start stealing gold from the bad guys, Robin's face-concealing black hood becoming a revolutionary emblem on par with the Guy Fawkes mask. At the same time, Robin ingratiates himself into the Sheriff's inner circle, gathering intelligence for his growing rebellion, and uncovering a conspiracy to subjugate the people that's even more awful than what he'd imagined. The film's supporting heroes—including Robin's former fiancee Maid Marian (Eve Hewson) and the local clergyman Friar Tuck (Tim Minchin)—are quite jaded about the world. They require little prompting to join Robin's campaign to give gold and hope back to people who've been abused or taken for granted by the state.

Ben Chandler and David James Kelly's script takes a story that's several centuries old and marries it to modern-day concepts and language, and the filmmakers try to push that strategy to the next level. Like Guy Ritchie's recent attempt to update another ancient English hero in "King Arthur: Legend of the Sword"—and, for that matter, Kevin Reynold's 1991 hit "Robin Hood: Prince of Thieves," from which this film borrows freely—this is a loud, fast, choppy production, with a punkish yet earnest edge. It often apes the look and feel of Christopher Nolan's Batman films, trading energy for elegance, and enthusiastically owning its many, blatant anachronisms. Marian has circa 2016 smoky-eye makeup, the costuming showcases some of the yummiest custom-cut leather jackets in cinema history, and the combat sequences feature archers rapidly firing arrows at each other at close quarters, like gunfighters in a John Wick film. An opening action sequence set in Syria has stuttering handheld camerawork in the vein of "Saving Private Ryan" and "Black Hawk Down."

The dialogue is likewise packed with modern aphorisms and political slogans that seem meant to lodge in the mind and incite passions. At one point, the corrupt Sheriff of Nottingham, who's presented as a Trump-Bolsonaro-Le Pen-styled nationalist/racist despot, quotes George W. Bush's post-9/11 statement "They hate us for our freedom," in reference to the Muslim hordes that the Christian warriors are fighting overseas. He warns that they'll overrun England unless everyone pitches in with their treasure and blood. "They'll burn your houses!" the Sheriff bellows. "They'll burn your land!" Robin and John's friendship is treated as a bond between men who are smart enough to see through the forces that are trying to trick them into hating each other.

The film's genuine cynicism towards the powers that be is palpable, and it runs deeper than you expect. The Sheriff is in cahoots with a cruel and greedy Cardinal (F. Murray Abraham), who reveals that they're secretly funding both the Christians and the Muslims overseas to keep the war machine going and the gold pouring into the coffers of the local mine and foundry, which employs much of the local population and belches flame and toxic fumes. Marian's new husband Will Scarlet (Jamie Dornan), whom she married after Robin was reported dead in the war, is what 2018 political commentators would call a "centrist," expressing guarded sympathy for the motives of Robin and the other rebels while decrying their methods and worrying that they're going to upset a system that provides him with a stable and comfortable life. This is the kind of movie that turns boilerplate phrases into images, as when a newly radicalized character becomes a literal bomb-thrower.

In contrast to many other heroic narratives that are about nothing more than being opposed to bad people doing bad stuff, this "Robin Hood" is about institutional as well as personal corruption; it goes out of its way to show how one feeds and expands the other, and how perpetrators cloak themselves in political slogans and religious imagery while picking the pockets of working people and turning nations against each other. The movie is specifically an anti-organized religion statement as well as an anti-capitalist and anti-nationalist statement: a Noam Chomsky editorial with bows and arrows.

The film's storytelling, however, is as conservative as its messaging is intriguingly radical. While modernizing other aspects of the legend, the script fails to find a new way into Robin's relationships with John (essentially another neutered Black mentor/father figure to a young, white man, his lopped-off hand preventing him from ever besting his student) and Marian (a damsel in distress, still, no matter how spunkily she resists the rape-minded Sheriff and his goons).

The direction is paint-by-numbers, capturing every piece of relevant action but evoking nothing—which would be aesthetically offensive even if the costumers, set builders and decorators weren't in there filling every frame with colors and textures worth savoring. There's not a single witty or lyrical image anywhere in the movie, which wastes its dynamic, wide framing, and is shot in a glitzy, fast-cut style, characteristic of high-end TV pilots, complete with BOOM! sounds to inform us that something important just happened. A lot of the special effects are dodgy, particularly a wagon chase scene where Robin, Marian and John flee the Sherriff's guards and the assassin Guy of Gisborne (Paul Anderson) in the fiery mills. The actors are so clearly not inhabiting the same space as the spectacle, they might as well be standing on the deck of The Love Boat. But in the end "Robin Hood," succumbs to Marvel/DC syndrome, presumptuously setting up a sequel that it's hard to imagine anyone demanding. 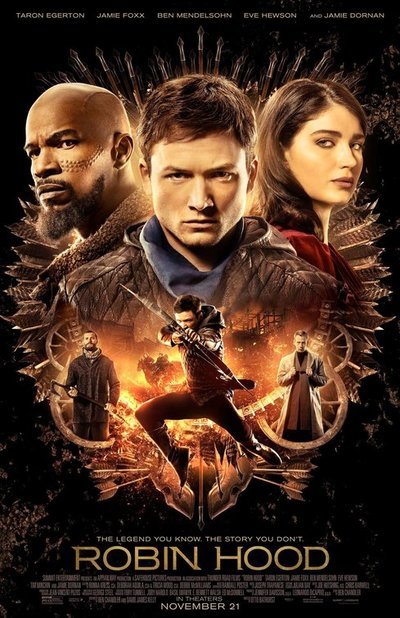 Jamie Dornan as Will Scarlet

Ben Mendelsohn as Sheriff of Nottingham