If you, like me, are a cult film aficionado, you might work yourself into an unnecessary dither upon seeing a new psychological thriller about hitchhikers with the title "Road Games." If this movie title means nothing to you, do not panic. Heck, you should take deep breaths through your mouth even if you do worship the superb 1981 Hitchcock homage of the same name (starring Stacy Keach and Jamie Lee Curtis). The new "Road Games," writer/director Abner Pastoll's sophomore feature, has very little to do with the earlier movie of the same name. This film's title is just an artful tip of the cap to a primary influence. Pastoll's project is, unlike many contemporary indie thrillers, genuinely moody in parts since it was filmed by people who want to put you on edge just by focusing on desolate back roads, creaking floorboards, and circuitous conversations. So yes, you can enjoy "Road Games" even if you aren't a gorehound. I wish I could recommend "Road Games" beyond that though, since all roads lead to a twist ending that you can kinda-sorta make out from a mile off. By preferring to keep viewers in suspense until the film's finale, Pastoll makes it harder to recommend a movie that has many good ideas, but no clue what to do with them.

Later in his film, Pastoll helps viewers understand what they just saw by naming a never-seen character after Claude Chabrol, the master French filmmaker whose singularly playful thrillers include "Le Boucher" and "Le Beau Serge." By winking at cinephiles in this way, Pastoll encourages us to revel in his characters' conspicuous attempts at misdirection. You're supposed to feel like you are kinda-sorta in on these characters' schemes, even if you really aren't. So hold onto your initial misgivings about good guy hitchhiker Jack (Andrew Simpson) and mysterious companion Véronique (Joséphine de La Baume): that slight prickling of discomfort you get around these characters is intentional.

Or at least, that's how you're meant to enjoy watching the main part of "Road Games." There are two narrative layers at work here: a straight-forward serial-killer plot, and Jack and Véronique's not-so-subtly hidden backstories. The plot focuses on interplay between Jack, Véronique, and creepy motorist Grizard (Frédéric Pierrot), a brutish Frenchman who picks our weary travelers up, and gives them very little reason to trust him. I mean, look at this guy: his unkempt hair, and squat mongoloid build scream, "Frustrated alpha-male artist/serial-killer/Dairy Queen employee in training." What's Grizard hiding? How is terrified wife Mary (scream queen Barbara Crampton!) involved? And where do they keep the bodies?

But Ben and Véronique's respective lives before the road trip are the crux of Pastoll's promising old-school thriller. This part of the film is crucial. For starters, you have to buy that this young couple have romantic chemistry, and Simpson sadly can't keep up with de La Baume. Pastoll also sometimes doesn't seem to know how to get the most out of de La Baume's withdrawn performance. As a result, sparks do not fly when these characters flirt with each other, though their body parts are filmed well during a genuinely sexy sex scene.

More importantly: Pastoll treats hints about his characters' past as if they were the only card up his sleeve. That's a problem since we, as viewers, should be lost in frustrated banter between Grizard and Jack, or Jack and Véronique. Conversation is the thing, and so much dialogue stops and starts with tidbit-sized clues/red herrings, like when Véronique talks about practicing her signature, or Ben mentions his cheating ex-girlfriend. These little moments shouldn't be too obvious since that would detract from the film's main plot. But realistically, they're the soul of the film, especially given how rote the rest of the plot is. If you like horror films, or thrillers, you've probably heard this one before: a guy and girl fall in love, get terrorized by a creepy foreigner, must escape. Big deal, so what?

Well, I don't know, actually. I want to commend Pastoll for telling a thrice-told tale with style and doing it in such an inviting way that I sometimes got lost waiting for the proverbial other shoe to drop. But then the climax of "Road Games" comes to mind, and that pretty much ruins the rest of the movie. What to do with a mood piece whose creators inadvertently put so much weight on the finale, and then can't deliver a satisfying resolution?

I don't know if I can recommend "Road Games." Moviegoers should check it out if they're curious since it does stand apart from other contemporary thrillers. But "recommend" is probably too strong a word. I want to see what Pastoll does next, and hope people give him that opportunity by seeing "Road Games." But I can't honestly say I enjoyed Pastoll's breakthrough film beyond that. You should know what generic perils await you before watching this one. It's not as tricky as it should be, but it is appropriately tantalizing. 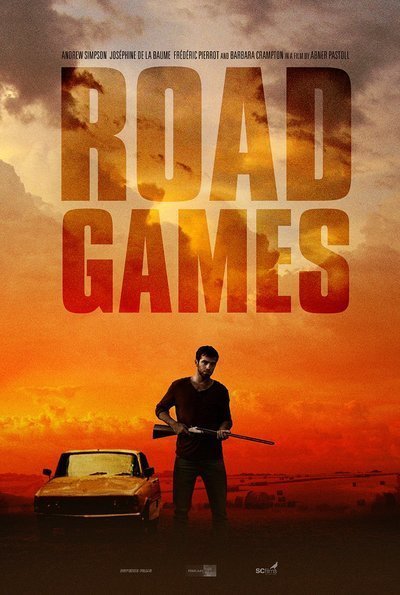