Considering that I always found the various installments in the “Ring” film franchise—both the original 1998 Japanese version, the wildly successful 2002 English-language remake and their various sequels—to be fairly dumb, I can’t say I was throbbing with anticipation at the notion of seeing “Rings,” the long-delayed sequel that attempts to reintroduce the saga to a target audience that may not have even been properly potty-trained when the previous installment, “The Ring Two,” hit multiplexes way back in 2005. That said, while I may not have cared for them at all, I am willing to concede that those films were made with a certain degree of skill, and that the American ones were graced with performances by Naomi Watts that were far better than the material deserved. “Rings,” on the other hand, lacks even those modest saving graces.

The conceit of “The Ring” saga, if you somehow managed to forget it, concerns the existence of an unmarked videotape that contains a short surreal film that is supposed to be indescribably eerie but which looks more like a runner-up title at a lesser underground film festival. For most people, sitting through something like that would be torture enough, but immediately after viewing, you get a phone call with the voice of a little girl saying “Seven Days” and if you don’t make a copy of the video and get someone else to watch it in that time, you die a hideous death. It is all connected to a girl named Samara who lived a sad life, died violently and whose spirit haunts the video. She now haunts those who watch it and has a tendency to climb out of television screens in order to claim her victims. Yes, I know how silly this all sounds but trust me, it was considered to be scary stuff back in the day.

This time around, the story centers on a couple of adorable “teenagers”—Holt (Alex Roe) and Julia (Matilda Lutz)—who are separating. He's going off to college, she's staying at home to care for her sick mother. They promise to stay in contact, but when Holt seems to vanish, Julia drives up to the college to find out what is going on. After getting the brush-off from his favorite teacher, Professor Gabriel (Johnny Galecki), Julia gets suspicious and follows him to a campus building where Gabriel and a number of students are trying to unlock the secrets of the tape by watching it and studying its effects, always taking care to have someone else view the tape as well to keep them safe. Considering that the facilities look more like a trying-too-hard club than anything else, what with the mood lighting and hipster vibe, I would love to see how Gabriel managed to get his budget approved.

Once Julia ends up watching the video herself in order to temporarily save Holt after Gabriel’s program inevitably goes sideways, the two of them go off on yet another journey to uncover the secrets behind Samara, in the hope of bringing her peace and saving their skins in the process. This time around, they journey to a near-ghost town, where her remains were supposedly buried 12 years earlier and where a popular local girl went missing 30 years earlier. The couple also manage to discover that Julia’s copy of the video seems to contain an additional video within it featuring strange new footage that corresponds with the weird hallucinations she is now having—yes, Samara’s haunted movie of the damned now has an extended director’s cut! Further intrigue comes in the form of Vincent D’Onofrio, who plays a blind caretaker who supplies the kids with some important details.

As dumb as the early stuff involving Professor Gabriel and his students—and even Peter Venkman might question the scientific validity of his research—it at least spins “Rings” off in a different direction from the other films and might have led to something potentially interesting in the right hands. Unfortunately, those hands evidently did not belong to director F. Javier Gutierrez or the trio of credited screenwriters because they quickly abandon all of that in order to offer yet another rehash of familiar material. Since it is pretty much all stuff that we have seen before, despite the superficial attempts to move the material into the age of smartphones and social media, there is little tension to be had and even the big “BOO!” moments seem tired and halfhearted. While Naomi Watts was able to sell the silliness with her undeniable acting talent, the young stars here are not up to that task; pros like Galecki and D’Onofrio go through their paces with the minimum amount of effort required to earn their paychecks.

More wearying than frightening, “Rings” is a total non-starter that may well win the weekend box-office derby (if only because of the weak competition) but which will be blessedly forgotten by most of those who see it after seven days—a month tops. If you are looking for a scary movie to watch this weekend, perhaps I can steer you away from this and towards the uncommonly effective indie creepfest “The Autopsy of Jane Doe,” which takes a potentially silly story and executes it with a lot of style and tension. If you are curious as to what happened to Julia’s mother—who was too sick for her daughter to go off to college—I am afraid that you are out of luck. 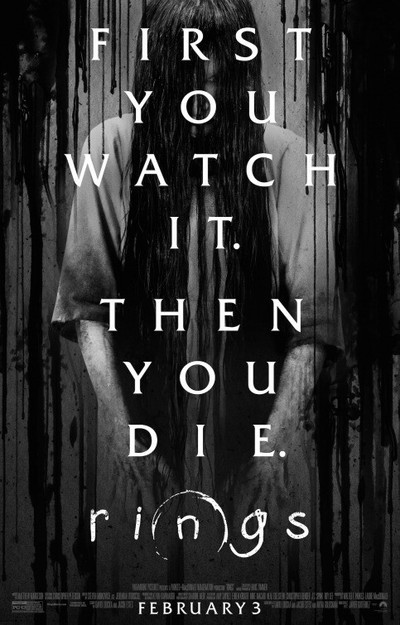 Writer (based on the novel "The Ring" by)