Rim of the World

Kids in 2019 got the raw deal of having their every embarrassing moment documented by their TikTok-ing peers, but at least they can find solace in the endless film library that comes from online streaming. There’s just so much potential for them to stumble upon stories that can captivate and even inspire—to see some even mildly surprising, wild stuff. Netflix's “Rim of the World,” however, is clearly not one of those titles. Its greatest value is probably in how it could educate budding movie-lovers on cheesy and predictable storytelling, but even that seems like a lesson “Rim of the World” cynically teaches at an elementary level.

“Rim of the World” is the strange name for a summer camp in California, where the major events of director McG’s movie kick off. Attendees include the fear-addled Alex (Jack Gore), who arrives in a tweed suit and tie and then chickens out from taking the zip-line. Then there's Dariush (Benjamin Flores Jr.), a hot shot “future Mercedes dealership heir,” who provides most of the film’s jokes from his motormouth ways and the subsequent slapstick he’s subject to. While standing over a cliffside away from the other campers, the two are joined by ZhenZhen (Miya Cech), who does not speak but clings to a brochure of the camp. Before the plot takes off, a fourth kid appears—Alessio Scalzotto's Gabriel, whose background is not revealed until later. All of these characters are later shown to be more than their appearances, as this script touts like seemingly any other screenplay with similar-aged characters, but it’s just the matter of a heart-to-heart before the story moves on.

Suddenly, McG's film shifts from toilet humor campground comedy to generic sci-fi adventure when explosions burst in the sky. “It’s the second 7/11!” responds Dariush. No, it’s just a regular-looking alien invasion, where UFOs shoot gloopy laser beams at fighter jets in the sky. Meanwhile, an astronaut has crashed on the campground, with a very important key in hand. Before she’s killed by a shapeshifting, multi-limb grey alien beast that comes from space (and carries on the generic monster designs seen in “Shazam!” and “A Quiet Place”), she passes the key on to the four kids, who then must get it to a lab in Pasadena. With California turned into their apocalyptic jungle gym, McG’s film then sets these characters on a straightforward path to saving the world, where the comic and horror beats are similarly obvious.

The movie would be a whole lot more fun if it felt like the filmmakers wanted to be there. Instead it looks like they’re trying to desperately amuse themselves, the way that Shane Hurlbut's cinematography shifts in radically different color tints from one scene to the next, or with a complicated elaborate one-take that shows Dariush ... getting in and out of a camp van and into another. It’s a definitively lifeless idea of genre filmmaking, especially compared to the open concession stand that was the sugary, indulgent, and delightful “The Babysitter” (McG’s 2017 Netflix project), which is definitely more R-rated but felt like it was made by a human being, and not a content machine.

Dialogue is a big part of the script's humor, where references to random movies are the closest it has to gaining some goofy edge. Flores mentions Werner Herzog’s “Grizzly Man” in a way that has me amused at the thought of middle schoolers seeking out the traumatic documentary, but there’s little zing to other name-drops that place "Rim of the World" as just another dot in the movie galaxy. On a deeper level, it becomes plainly tiresome to hear non-white characters become identified primarily by their ethnicity, creating toxic character-based humor for the likes of Dariush and ZhenZhen.

“Rim of the World” just doesn’t offer that standout, escapist fun of entertainment—it does quote previous movies literally (as ZhenZhen speaks a line from “Star Wars” as if it were a life motto) but also visually, like when a scene has the four kids cowering in a kitchen like “Jurassic Park,” or a scene of them running away from CGI explosions in the city like in “Transformers.” But “Rim of the World” is always defined by feeling so bland, as that war-torn Los Angeles looks like the backlot that it is, while wholesale sci-fi sequences prove the shortness of the story's imagination. "Rim of the World" is not going to inspire young viewers to look up at the stars, pretend to run from alien monsters, or continue its story in their own imaginations. It probably won’t even keep them awake during a slumber party. 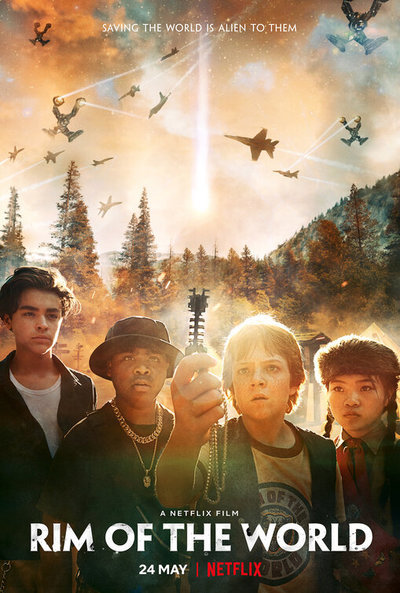