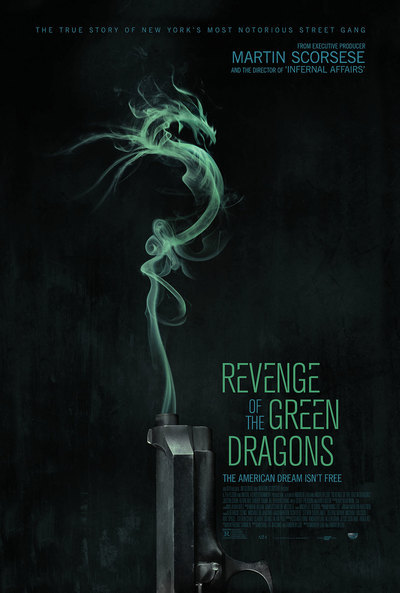 Rated R for strong violence including a sexual assault, pervasive language, some drug use and sexual content

The only thing novel about the generic Hong Kong gangster film "Revenge of the Green Dragons"  is its subject: Chinese immigrants struggling to maintain their agency and identities in New York City in the mid-to-late '80s. Everything else about the film is lifted from other true crime stories, especially Martin Scorsese's seminal dramas. This is partly intentional, as we see in bookend images that position the film as a pseudo-universal, one-immigrant-story-fits-all story: angry waves lap at a boat filled with illegal immigrants. But the boat's human cargo is tellingly offscreen, ostensibly in order to lend these scenes a mythic quality. But by widening the scope of their based-on-a-true story, the makers of "Revenge of the Green Dragon" make their subjects look like the products of unimaginative cultural assimilation.

"Revenge of the Green Dragons" is the story of Sonny and Steven (Justin Chon and Kevin Wu), two young men who try and fail to discover themselves by joining a gang. That's not a spoiler: Sonny ostentatiously broadcasts his inevitable failure in a world-weary introduction: "This is a story about coming to America. Only it's not that story, the one where everyone lives happily ever after." This warning might be exciting if "Revenge of the Green Dragons" didn't immediately proceed to deliver the exact story Sonny claims to be responding to, and not buying into.

Welcome to Flushing, Queens in 1983, a time when Chinese immigrants dominated the neighborhood, and, according to Sonny, left bewildered Jewish and Greek residents wondering at the influx of MSG-slinging restaurants. These restaurants are either protected, or run by gangs like the Green Dragons, thugs that terrorize women, and pre-pubescent kids like Sonny and Steven. The Dragons' presence is a sad fact of life. They're boisterous, trigger-happy stereotypes, the kind of preening tough guys that taunt Chinese-American cops by accusing them of cronyism and collusion. These guys claim to be different than the five other major gangs in Queens, but that's apparently wishful thinking.

Still, even after they're beaten up and mercilessly hazed by the Green Dragons, Sonny and Steven inexplicably still want to be one of them, one of them. They believe Chen I. Chung (Leonard Wu) when he puffs out his chest and snarls to himself "I'm Green Dragon: I know who I am." But you never really find out what that means since "Revenge of the Green Dragons" is a convoluted connect-the-dots gangster narrative with no pretensions or vested interest in its characters' motives. All we is know is Sonny and Steven want to pass as big men, and inevitably realize what anyone that's seen "Mean Streets" or "Goodfellas" already knows: there's no hope for advancement in a world where dog routinely bites dog.The immigrant experience in "Revenge of the Green Dragons" is a dim projection that's most intriguing when powerless characters like Sonny bluntly talk about how disenfranchised disenchanted they are. The film eventually collapses into cliches, but it does start off strong, suggesting that there's a difference between line-toeing immigrants and stubborn "Chinamen" who refuse to get with the program. In one fleetingly memorable scene, Steven and Sonny share a hot dog because "This is America. You eat what they eat." Sonny, the film's narrator and the closest thing it has to a hero, also dryly jokes that the Chinese population in Flushing boomed so fast in the '80s that the 7 train became known as "the Orient Express."

But after these initial tantalizing hints of a unique, and heretofore unheralded New York drama, "Revenge of the Green Dragons" settles into comforting cliches. There's a doomed romance with Tina (Shuya Chang), who's too good for boyfriend Sonny, but not good enough to leave him. And there's tension between sympathetic white hat cop Detective Tang (Jin Auyeung), and, if you'll pardon the pun, bull-in-a-China-shop FBI agent Michael Bloom (Ray Liotta, half-asleep). There's also Sonny and Steven's fraternal rivalry, though that often feels like an afterthought in a film that distractedly shifts from one sub-plot to the next.

All of these tiresome elements are lumped into "Revenge of the Green Dragons"' melting pot of miserablist pulp, and none of them come out well: the action scenes are covered, not directed; there's no chemistry between any of the lead actors; and the film's prefabricated trust-nobody attitude isn't convincing, especially not when Sonny conspires with viewers through voiceover narration, and outlines the Green Dragons' cardinal rules, like "Never shoot whites," and "Always shoot guy in head." That's supposed to be tall talk from a kid who clearly doesn't know better, but it just sounds like bad jive. There's a good story somewhere in "Revenge of the Green Dragons," but it's not the one Lau and his colleagues chose to retell.