"Where's everyone? Where is everyone?" When the old confused woman (Robyn Nevin) asks the question, again and again, she truly needs an answer. Although her daughter and granddaughter are with her, her experience is that of total isolation, of wondering where "everyone" has gone. This heart-rending moment in "Relic," the directorial debut of Australian filmmaker Natalie Erika James, is really the heart and soul of this creepy haunted-house film. The house is haunted, yes, but it's really the characters who are haunted, haunted by the past, by regrets and shame, by things left undone or unsaid, by unmanaged grief and loss. These experiences are so overpowering the whole world becomes a haunted house. "Relic," with a script co-written by James and Christian White, is filled with subtle detail, character depth, and a creeping mood of dread, illuminated by the three central performances given by Nevin, Emily Mortimer and Bella Heathcote.

When workaholic Kay (Mortimer) gets a call from police that her elderly mother has been missing for a couple of days, she and her daughter Sam (Heathcote) take a road trip to investigate. Edna (Nevin) lives in a big home out in a wooded rural area. Kay and Sam find the house empty, with no overt signs of anything amiss (at least not at first glance). But there are unexplained details that somehow suggest Edna might have been going off the rails. The armchair in the living room has been turned to face the bay window. There's a strange lock attached to the back door. Edna is nowhere to be found. When Edna re-appears a couple of days later, she has no explanation for where she's been. She is very disoriented and irritated at all the fuss being made over her. Kay, and the doctor who examine her, chalk it up to age, and perhaps dementia. Kay agrees to stay with her mother for a couple of days, even though it is increasingly obvious that Edna is not well, and will need full-time care.

The film progresses on a very slow burn, with things said and unsaid seething through the interactions between these three generations of women. "Relic" is not in a rush to overload us with information, psychology, or its backstory. Kay has been a somewhat neglectful daughter. She hasn't talked to her mother in weeks. It's not a close relationship. Kay has a lot of guilt. Sam offers to move out and stay with her grandmother to take care of her. Kay doesn't like that idea at all.

Shot by Charlie Sarroff, "Relic" is a mesmerizing blend of frenetic action (particularly as it reaches its climax) and almost unbearable stillness. The house is filmed it is a collection of "relics" in a dusty long-closed museum, the camera lingering on objects: the stained-glass window in the front door, the thick curls of wax from the candles Edna makes, the spots of black mould on the wall, the rotting fruit in a bowl. Interspersed with the womens' conversations, are long static shots of the house's empty hallways, the shadowy stairs, the slightly open doors ... it's extremely unnerving. Something is just around the corner. Or right outside the door. Something is behind the walls. The shadows move. Both Kay and Sam sense that something is very wrong in this house. But Edna's fear of the house, or the little note she keeps crumpled up in her pocket ("DON'T FOLLOW IT") are chalked up to dementia.

This aspect of the film is its most thought-provoking and poignant. Edna's fears are legitimate: there is something in the house that is not right at all. Yet she isn't listened to, because the elderly in general aren't listened to. They're condescended to, dismissed, or ignored. Edna's loneliness, her terrors, are all interpreted as signs of dementia. But maybe Edna is the only one who really knows what's going on. When she asks, quivering with fear, "Where's everyone?" she has the firmest grasp on her own reality than any of the women in the house. Watching a loved one succumb to the grip of Alzheimer's is a harrowing experience. It's like you lose little bits of them at a time. You want to hold on to the person they were. Alzheimer's is brutal. "Relic" is filled with the pain of that experience, and the guilt Kay feels at even thinking about looking into "homes" where Edna could be placed.

Meanwhile, though, the house keeps transforming, and its transformation is an organic process, erupting like a natural phenomenon. The final 20 minutes of "Relic" are extremely nerve-wracking, with an intense sense of claustrophobia and terror. There are nods to other crazy houses in film and/or literature, like the arms bursting out of the hallway walls in Roman Polanski's "Repulsion," or the house in Darren Aronofsky's "mother!" slowly morphing into a dystopian nightmare, or Mark Danielewski's classic book House of Leaves, about a house whose interior is bigger than its exterior measurements. The house in "Relic" is a camouflage for the house behind it, the real house. This is a powerful metaphor for the human condition. "Relic" is an extremely strong debut from this very talented filmmaker.

Now playing this weekend at select drive-in theaters, and expanding to digital, VOD, and more theaters next week, 7/10. 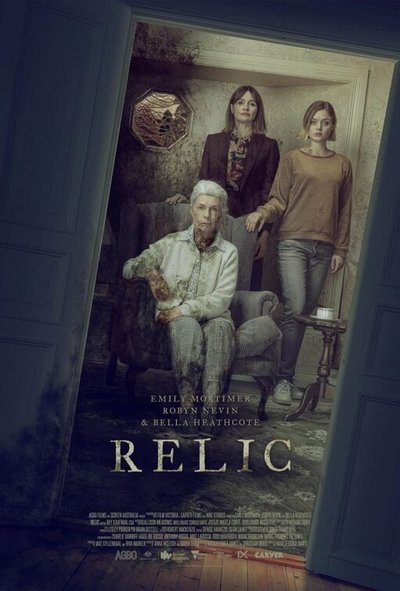 Rated R for some horror violence/disturbing images, and language.