I don't know if you can get on the same wavelength as "Relaxer"; you're either with this grimy slacker comedy or you aren't. I like "Relaxer" a lot, possibly because it is what high-school age me thought American indie cinema was like. Adenoidal drop-out protagonists, over-determined scatological humor, an oppressive dream-like mood—"Relaxer" takes me back to my adolescence (I was a teenage misanthrope!). I was reminded of the hilariously crass Gen X indie comic books of Chester Brown ("Ed the Happy Clown"), Dan Clowes ("Ghost World"), and Joe Matt ("Peepshow"), as well as the sad-sack antihero protagonists of early movies by Jim Jarmusch ("Stranger Than Paradise") and Richard Linklater ("Slacker").

Which is weird, because "Relaxer" isn't really like those comics or movies. Instead, "Relaxer" is a light, but moody comedy about an irredeemable loser who is too unwell to save himself. Imagine a deceptively optimistic comedy concerning a neurotic fish who's slowly circling his unwashed, slow-draining aquarium.

"Relaxer" follows Abbie (Joshua Burge), a scrawny oddball who refuses to leave a ratty, over-stuffed leather couch—he says it doesn't belong to him—until his snotty older brother Cam (David Dastmalchian) says he can. Unfortunately, Cam won't let Abbie get up until he's completed the latest in a series of bizarre dares/challenges, all of which involve eating or drinking too much, too fast. So when we first meet Abbie, he's about to vomit and/or urinate after drinking (most of) a gallon of milk. Soon after that, Cam gives Abbie an ultimate, final challenge: sit on the couch and defeat level 256 of "Pac-Man." The year is 1999, the place is suburban Michigan, and the rest is mostly immaterial.

According to Potrykus, Abbie represents his own long-held fantasy of dropping out of society just to play video games. Watching "Relaxer" does not, however, feel like having a bad nightmare. It's more like a detailed stress dream, one that you just have to get out of your system, no matter how grim and unbearable it may seem in retrospect.

After all, Potrykus' jokes are never really on Abbie—they're just about Abbie. Abbie's completely unhygienic: he rarely wears a shirt, so we often get two eyes-ful of Burge's sweaty, acne-covered chest. Abbie's also too weak-willed to take care of himself. And he doesn't really have any friends, except for Faygo-swilling burnout Dallas (Andre Hyland) and fair weather acquaintance Arin (Adina Howard).

But wait, there's more: Abbie's dad is in jail, but Abbie wants to visit him—after he wins $10,000 from a "Nintendo Power"-sponsored contest (hosted by disgraced competitive video game player Billy Mitchell). Abbie also thinks he might have psychic powers. He is pretty much as incompetent and unlikely to survive as his brother Cam says he is. Which is funny since, in the movie's press notes, Potrykus says that his earlier comedies are "cold and dark," like Cam and his worldview. I've only seen "Buzzard"—which features at least one all-time great sequence (Bugle Treadmill!)—but I can see similarities between it and "Relaxer." Cam's borderline nihilistic point-of-view defines Abbie's world, even if Abbie refuses to let his brother's apparent obnoxiousness bring him down.

"Relaxer" is not as grim as it sounds. Potrykus clearly loves Abbie, though I suspect it's because he, and the audience, already know that Abbie is useless ... we just want to believe he's not. That sort of magical thinking is the key to enjoying "Relaxer," a comedy about wish fulfillment. Which strangely makes a lot of sense since, generally speaking, a lot of DIY/maker culture looks like modern-day alchemy (for more on DIY culture's ties to the supernatural, I highly recommend Peter Bebergal's recent non-fiction book Strange Frequencies).

If you believe you can do something impossible, then your quest to hack the code of everyday life can be a spiritually fulfilling reward unto itself. Abbie's quest to beat "Pac-Man" (and win money, and be self-sufficient, and reunite with his dad) isn't at all spiritual, but that's what makes it funny—he has the patience of a saint, without any other saint-like qualities. Everyone else in Michigan may be scrambling for their bunkers because of pre-Millennial fears of the Y2K bug. But Abbie will succeed no matter what happens—because he knows he will. Even if he has to bury himself in sweat, debris, vomit, feces, urine, and, uh, is that snow? I can't honestly recommend "Relaxer" to most readers, but if you like this kind of thing, you'll probably love it. 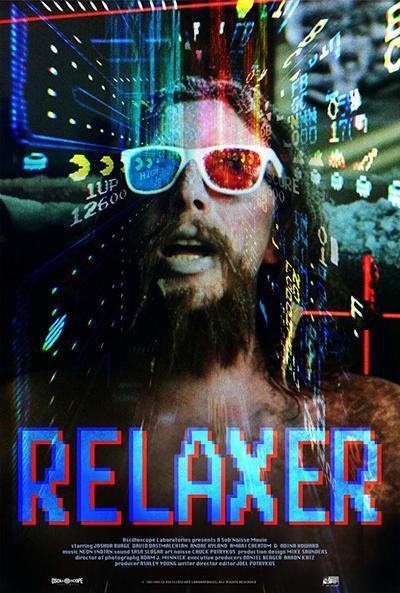