"Redeeming Love" is based on a best-selling novel by Francine Rivers, set during the California Gold Rush and inspired by the Biblical story of Hosea, a prophet, who married Gomer, an unfaithful woman. Publisher’s Weekly said about the book, “Writers like Rivers are why people buy Christian fiction,” and, as with the film, for some people that will be a recommendation and for others a warning. The novel has a lot of passionate fans who will want the movie to be exactly what they imagined on the page, and that is what they will find. It is sincerely made, with exceptionally attractive actors who give heartfelt performances in some beautiful settings, in a story that fits comfortably and reassuringly into a particular spiritual world view. For those who do not share that view or the storytelling traditions of giving oral testimony about horrific challenges leading to a connection to God, the film will not be as satisfying.

The title makes it clear that there will be no ambiguity about where it is going. First there will be sin and then there will be redemption through prayer. As Shakespeare said, though, the heroine in this story is “more sinned against than sinning.” She is called Angel (the angelically lovely Abigail Cowen) and the man who will help her find redemption is Michael Hosea (Tom Lewis). I already pointed out the lack of ambiguity, but just to be even clearer, in the spirit of a movie that really spells everything out, it begins with a bunch of people panning for gold in the muck, one jubilantly finding a shining nugget.

Angel is the most sought-after prostitute in the town, so prized that there is a daily lottery to be with her. We first see her gazing dully out of the window as behind her a man puts money on the table before he leaves. One of the other young women from the brothel tells her, “You’ve got to hope for something more in this world.” Angel says she gets by because “I never look back and never look forward.” That is not exactly true as there are a bunch of flashbacks as she does look back, giving us several flashbacks to see the horrific abuse she has suffered.

Michael is a farmer who prays for a wife. He is led to Angel. He goes to the brothel and pays for her time but just talks to her. She is so traumatized that she is incapable of responding to kindness or even simple decency. He does not give up, though he wryly admits, “The next time I pray for a woman to share my life I’m going to be much more specific.” Finally, he gets her to marry him. Though she goes with him to the farm, she tells him she will only “play along until I pay you what I owe you.” He is so gentle and respectful that she begins to trust him, and so she leaves because she cannot be the woman she thinks he deserves. There will be more abuse and more healing before, well, see the title.

The relentlessness of the litany of tragic pain and loss inflicted on Angel, including incest, suicide, theft, abortion, child molestation, abandonment, sex trafficking, arson, and much more, may come across as unsettling to those not schooled in this specific form of Christian storytelling. Those from more fundamentalist traditions will be more at home with the “Hell House”-style fascination with (and amplification of) the sins of the world and the eternal damnation that is the consequence. Whether innate or learned, there are narrative beats familiar from most mainstream stories that make “Redeeming Love” uncomfortably unbalanced for audiences who are from other faith traditions or secular.

Cowan and Lewis make a very appealing couple, warm and natural even with the most heavy-handed dialogue. It's impossible not to root for them, and Lewis somehow makes Michael’s near-saintly patience and gallantry seem human. But the other characters are barely sketched-in props, the storyline is wildly melodramatic, and the movie is at best casual and at worst an endorsement of lynching (guilty) people accused of crimes. The biggest problem is that the most touching moments are hammered so hard. "Redeeming Love" could have tried to reach a broader audience but settles for preaching to the choir. 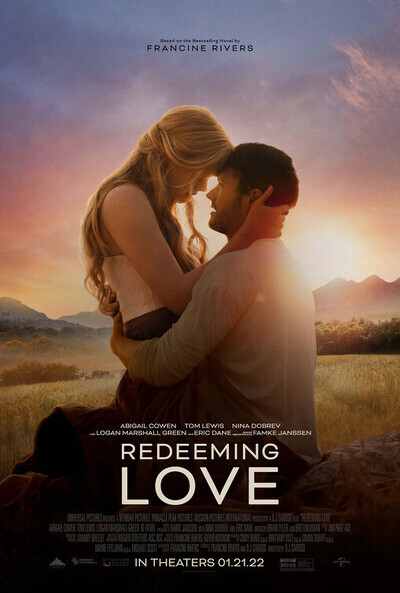