The traditional logic is that an action movie is only as good as its villain. This is especially true in the case of an action movie in which the hero is little more than the strong, silent type. The protagonist of "Redeemer" is just such a type. At one point, a character notes that he hasn't heard the hero say more than 10 words the entire time that he's known him, which, admittedly, has only been a couple of days at that point. It's still an accurate observation, though.

The hero, who has a name but is primarily known in criminal circles as the Redeemer (Marko Zaror), doesn't say much, and what he does say usually amounts to threats tinged with religious import. "Get on your knees, and pray for forgiveness," he'll say when he encounters a group of bad guys. They don't, of course, so the Redeemer proceeds to fight them. It usually results in the deaths of the baddies in increasingly gruesome ways—by knife through a man's hand and into his back, by hook in a crook's mouth, by motorboat propeller in a henchman's face.

This is the Redeemer's character. He's strong, silent, religious in his own mind, and notably lethal. He has become a legend in criminal circles—a hush falls over the room at the mere mention of his nickname. The Redeemer travels the country, visiting local churches in order to seek out people who have been wronged. Whether or not these people ask for his help, the Redeemer hunts down the wrongdoers and puts his version of the fear of God into them before dispatching them with his hands, his feet, or whatever else might be around him. In the prologue, he overhears a man praying for justice for his son, who was savagely beaten by a group of Neo-Nazis. The Redeemer takes it upon himself to bring about what he believes to be justice.

There's not much to him, so that's where the traditional logic of the necessity of a good villain comes into play. We want some kind of personality to accompany the violence and wanton bloodletting, otherwise it can easily become a shallow exercise in fights and shootouts and explosions of the red stuff.

The movie, written and directed by Ernesto Díaz Espinoza, provides two villains. The first is another strong, silent type of man, although he might say more words in the movie's climax than the Redeemer says through the entire movie. He's called the Scorpion (Jose Luis Mosca), and his goal is to kill the Redeemer. His methods are what set him apart from just some anonymous antagonist. He is not only hunting his foe but also killing the people the Redeemer has helped in the process, even if those people have no direct ties to the Redeemer. He uses what he calls the worst kind of torture—mental—and the cruelest weapon—fear. The Scorpion offers the man from the prologue a sadistic choice: burn to death or shoot himself with the gun the Scorpion taped to his head. Whatever we might think of the Redeemer and his methods, this man is a monster.

The other villain is Bradock (Noah Segan), an American drug dealer who has come to Chile to give the country the drug lord he believes it needs. He's a more talkative fellow, especially since his translator (Daniel Maraboli) provides the subtext of threat in his words. He's also a joke, spending a good chunk of his time in the movie discussing what nickname he should give himself. He's amusing, which gives the violent material some much-needed levity, although a lot of the humor involving the character feels overly coordinated.

The plot is routine. The Redeemer arrives in a new town and becomes entangled in Bradock's most recent drug deal. The Scorpion gets closer. The Redeemer receives some help from Agustin (Mauricio Diocares), who unwittingly took the money for the drug deal, and Antonia (Loreto Aravena), the mother of a sick child who philosophizes about the nature of man to put the Redeemer in more sympathetic context.

It's merely an excuse to get the Redeemer involved in a series of brawls. These fights have been choreographed by Zaror in a way that feels atypical compared to what we usually see in martial arts movies. These bouts are slow (not simply because Espinoza highlights certain strikes and poses using slow-motion, which becomes extraneous pretty quickly) and methodical.

Zaror is clearly a skilled athlete, but what's more intriguing is how we can see him, as the Redeemer, planning his next move on the fly. It's not simply an explosion of violence. It's a precise burn. This is especially true in a trio of one-on-one confrontations in which we quickly comprehend the strategy employed by each of the combatants—grabs and holds to test each other's mettle or the Redeemer eyeing a certain spot on his opponent's body before unleashing a string of direct blows.

The first climax, which closes the drug deal portion of the plot, sidesteps the hand-to-hand fighting for a sequence of bloody gunplay. It's less involving, and indeed, the fights themselves become a bit repetitive. These wouldn't matter as much if "Redeemer" had a distinct personality beyond the occasional flash from the villains. 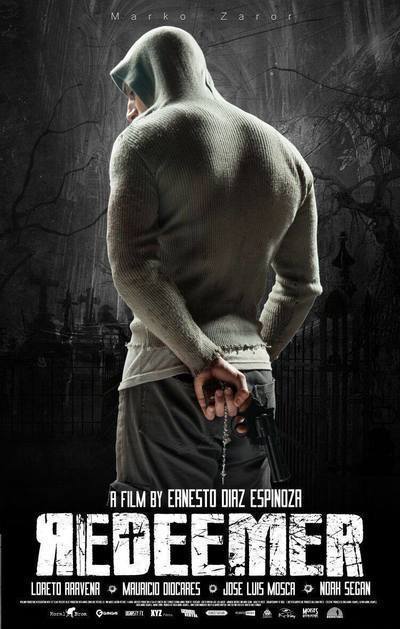