Akira Kurosawa's "Red Beard" is assembled with the complexity and depth of a good l9th-century novel, and it is a pleasure, in a time of stylishly fragmented films, to watch a director taking the time to fully develop his characters.

It is also rather startling to find a director who values the positive human impulses; whose film considers not only violence and deception, but also sacrifice and healing. There has been so much despair in recent films: More than we realize, until "Red Beard" provides such a contrast. There is no such thing, perhaps, as the right time or the wrong time to see a film. But somehow, at the end of a decade that has seen so many things go wrong, "Red Beard" seems necessary.

It is a great and moving film, although its length and the number of its characters may put off those not familiar with Kurosawa. Unlike American directors, who are usually forced to work at the commercially feasible length of under two hours, Kurosawa takes the time to develop his story in a leisurely fashion, establishing a rhythm more in time with the way we really live.

His film is about a young doctor (Yuzo Kayama) who comes to a free public clinic, more or less against his will, to work under the famous old doctor Red Beard (Toshiro Mifune). The time is about 1825. Modern advances in medicine are just seeping into Japan, and the young doctor is proud of the advanced training he's received at Nagasaki. He wants to be the personal doctor for a rich family; public clinics repel him. For many days he even refuses to wear a uniform.

But the old doctor, deeply aware of human nature, gradually involves the young man in the daily life of the clinic. He is sent to watch an old man die; it is a profound moment, Red Beard says, but the young doctor is horrified. A few days later, attending his first operation, he passes out. He discovers that medicine is a great deal more than an avenue into a fashionable career.

Kurosawa leaves his central narrative from time to time, to tell us stories about some of the patients in the clinic. He develops a subplot about a maltreated young girl, who refuses to talk to anyone and who becomes the young doctor's first real patient. The young doctor becomes sick himself, and old Red Beard subtly encourages the girl to nurse the doctor. By healing him, she is healed; and then she takes upon herself the care of a young thief and pauper in the neighborhood. So that three people are cured instead of one.

This theme of healing, of making some sort of human contribution is at the heart of my favorite Kurosawa film, "Ikiru" (1952). I suppose it is a terribly square film by our "sophisticated" standards, although it ventures much more deeply into the human condition than almost anything from Hollywood. "Ikiru" is about an old accountant who is told he has about six months to live.

Faced with the fact of death, he goes on a desperate last fling that leads nowhere. Gradually he becomes aware that he has accomplished exactly nothing in life; that the papers he has pushed around have been meaningless. He determines to achieve one good thing before he dies, and settles on reclaiming a small piece of land as a park for children.

This is a small thing but it is something, and that is the sort of gain that Red Beard tries to achieve at his clinic. The social order is corrupt, yes, and conditions at the clinic are discouraging. But each small gain is something. 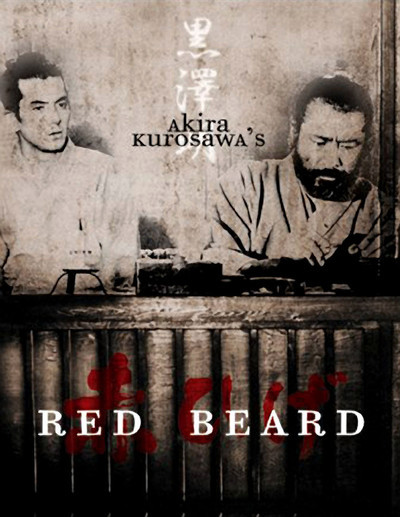