Emotionally charged, viscerally exciting and consistently enlightening, Gabe Polsky’s “Red Army” is a sports documentary like no other. Though it centers on an elite Soviet hockey team of the 1980s and ‘90s, it uses that lens to refract one of the most crucial geopolitical developments of the last half-century: the East-West confrontation between two powerful ideologies that led to the collapse of the Soviet Union and a subsequent world order dominated by the United States and its allies.

For viewers too young to remember the Cold War, the film offers a fascinating glimpse of a time when Americans were constantly looking over their shoulders at the massive nation on the other side of the globe that Ronald Reagan dubbed “the Evil Empire.” For those who do recall that time, “Red Army” will be a trip back to the era of bomb shelters and fears of nuclear attack, when sports and other cultural manifestations were weapons in the battle of two superpowers, each seeking to prove its superiority to the other.

For the Soviets, hockey was central to their national identity and global image, and endless resources and energy were expended on making the Red Army hockey team the best in the world. Aspiring young players trained and participated in rigorous competitions to make the team, and the fortunate few who did became national icons – a position at once glorious and implicitly perilous.

Though “Red Army” focuses on a group of five players who became a singular unit, the best of the best, its narrative centers on interview commentary by one of the five, who easily earns his pre-eminence in the film. Not just one of the greatest, most awarded hockey players of all time, Viachaslav “Slava” Fetisov is any filmmaker’s dream interview – funny, articulate, charismatic, forthright and at times disarmingly emotional.

As he recalls, the Soviet Union of his youth was still cratered with the ruins of World War II. Hockey was a way out of poverty, but it required tremendous discipline and the mentorship, in his case, of an inspiring coach, Anatoly Tarasov, who built a close-knit team of young stars. In 1978, the group made a trip to Canada accompanied by KGB agents (Polsky interviews one) assigned to make sure the Western consumer goods and easy lifestyles that dazzled the players didn’t also cause them to defect. But the real dazzling was done by the Soviets, whose superbly coordinated “weaving” style of play gave them easy victories in their five games against Canada.

Not long after, though, the team endured a blow when their beloved coach was dismissed after angering Soviet leader Leonid Brezhnev. He was replaced by a KGB-affiliated apparatchik, a bland-looking man named Tikhnov whose draconian coaching methods make J.K. Simmons’ drillmaster in “Whiplash” look like Mr. Chips. Whether due to his influence or not, the team subsequently suffered a stunning defeat by the Americans at the 1980 Lake Placid Olympics, which, coinciding with the Soviet invasion of Afghanistan, were redolent with Cold War tensions and rhetoric.

Thereafter the team rebounded and for several years was its zenith, the players’ simmering dislike of Tikhnov notwithstanding. Winning a gold medal at the 1984 Sarajevo Olympics was “the happiest moment of my life,” Fetisov recalls, and it was an elation that would be repeated with another gold at Calgary in 1988. Yet these and other victories eventually fell under the shadow of the Soviet Union’s gradual collapse, the collectivist idealism of yore giving way to disenchantment and economic stagnation.

One consequence was that Soviet authorities in the USSR’s final days had a financial incentive to allow players to go play in the West. Fetisov, however, was such a star, and so insistent on doing things on his own terms, that he was beaten and threatened and finally had to personally confront the USSR’s Minister of Defense, the nation’s second most powerful man, before being allowed to emigrate to the U.S. and play in the National Hockey League.

And even that passage was often not a happy one. Fetisov and other Russian players were routinely abused by the media and fans, and found their graceful style of play at odds with the cruder techniques and fist fights common in the NHL. Only after a few years, when he and four other Russians were allowed to reassemble and work together again as a seamlessly coordinated unit, did some of their old joy of play return.

Roughly a decade after the USSR’s disintegration, Fetisov and some of his fellows began returning to their homeland and were shocked at how different the new Russia was from the old Soviet Union. The freedoms were good, surely, but the rampant materialism and spiraling poverty left many dismayed. One of the few times the garrulous Fetisov is caught up short comes when Polsky asks him if he’d prefer to revert to the Soviet days, problems and all. It’s the wrong question, he replies, perplexed. In any case, many of these men elected to devote their energies to the reborn Russia. Embraced by Vladimir Putin, Fetisov served as the country’s Minister of Sport from 2002 to 2008 and currently serves in the upper house of the Federal Assembly of Russia.

That it covers such a momentous sweep of history gives “Red Army” the allure of an epic, though it’s one told in very intimate terms. The friendships of the players – and sometimes the interruptions thereof – are at the heart of the tale, as are the deep feelings each man has for his family, his homeland and fellow countrymen. Additionally, the film is mounted in a breezy, fast-paced style with lots of snazzy Soviet-esque graphics and evocative music that make it constantly engaging – a fun ride, but one with serious things to say about the relations of national sports and global politics. 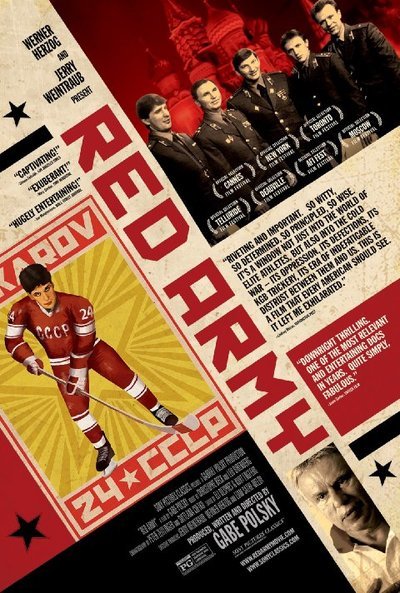