At the "RED 2" screening, I found myself conversing with a pre-adolescent film buff named Jordan. He was a sharp kid who gave me hope for the future film critics of America. His questions were succinctly designed to feel out the kind of critic I was. His first question was easy:

"My little brother is dying to see that."

Since he was interested in "any testosterone-driven action flick I can lay my hands on," Jordan expressed excitement for "RED 2." I hadn't yet seen RED, which, like its sequel, is based on a comic book series. I expected a very silly actioner, so I engaged the Jordan-aged version of myself as the lights went down. When they came back up, 12-year-old Odie was far from impressed. I could see my pint-sized self turning to my cousin to declare "well, that kinda sucked."

43-year-old Odie will be a little nicer to "RED 2," if only because I'm amused by the hypocrisy of the PG-13 rating. I don't know who the target audience is for this "Grand Theft Old Folks," but it wouldn't have been the teenage boys of my generation. We lusted for blood, boobs and bad words, all of which are in short supply under the auspices of the punk-ass PG-13 rating. In "RED 2," people are pumped with more bullets than those at the beginning of "Saving Private Ryan"; since they don't bleed, the MPAA considers this "family-friendly," hilariously calling it "frenetic gunplay." Helen Mirren can spin around in a car with two guns-a-blazin', but GOD FORBID she unleases Helen Mirren-appropriate F-words or a bodacious ta-ta! "RED 2" would be damned with the deadly, yet delicious R-rating, and Summit surely can't have that! As kids, we wouldn't have stood for this malarkey. As Roger so aptly pointed out, 1982's "Conan the Barbarian" is the kind of movie 12 year olds like me went for in droves.

"RED 2" reunites all the main players from RED, except Morgan Freeman (you'll know why if you've seen RED). Bruce Willis, Brian Cox, Helen Mirren, Mary-Louise Parker and John Malkovich return for more shoot-em-up action and witty, sarcastic banter. RED is an acronym describing these former agents—they're "Retired, Extremely Dangerous." Like RED, the sequel opens with Frank Moses (Willis, heroic as usual) trying to engage the R part of the titular acronym. His retirement is short lived—again—by a violent act. This time, the victim is his former partner Marvin Boggs (John Malkovich, very funny here). Boggs had been trying to warn Moses of impending danger, but Moses assumed it was just an attempt to get him to go on a new mission. This leads to one hell of a product placement: Boggs' car is blown up in the Costco parking lot. Imagine the commercial they could wring out of this revoltin' development! ("You'll get more BANG for your buck at Costco!")

Since "RED 2" is only 10 minutes old, and since we haven't seen any of Malkovich's scenes from the trailer, it's no spoiler to state Boggs isn't dead. "He fakes his death all the time!" Moses tells his beloved Sarah Ross (Parker, bubbly and ready for action). Sure enough, Boggs shows up to save Ross and Moses from an ambush. Boggs fills in the blanks: a document was leaked that erroneously linked him and Moses to a '70s era project called "Nightshade." As a result, everybody's out to kill them, including the guy "RED 2" pitches as its main villain, Jack Horton (Neal McDonough).

Moses' old ally Victoria (Dame Helen, 'nuff said), has also been hired to off him, but she at least has the British courtesy to call Moses beforehand. "I've been hired to kill you by MI6," she informs him while nonchalantly dissolving dead bodies with acid in a bathtub. (Of course, the bodies burn offscreen—damn you, PG-13!) Mirren is the best thing about both REDs; I believed in her prowess even at the most preposterous times. This film's comic highlight is Mirren's return to the role that won her the Oscar, Queen Elizabeth II. I'm not sure Her Majesty would approve of this performance, nor do I think it's a spoiler to tell you that Victoria doesn't even try to off Moses and Boggs.

We need someone who will try harder, so Horton hires Han Cho Bai ("I Saw The Devil"'s Byung-hun Lee). Han and Moses have a checkered past that gives Han even more fuel for revenge. Numerous times during "RED 2," Han is referred to as "the most dangerous hit man working today." An early scene seems to prove this—Han slits a guy's throat with origami—but a few scenes later, he can't hit Moses and Boggs with the gun Sam Peckinpah used at the end of "The Wild Bunch." Han destroys numerous cars and the van Moses and Boggs are hiding behind, yet he can't hit two people whose combined age is 117. The van Han obliterates collapses with conviction, as did my suspension of disbelief. This was the moment it irrevocably broke down.

The Nightshade project is "RED 2"'s MacGuffin. Moses and company need to find it to clear their names, and their quest leads them to Sir Tony Hopkins' Bailey. Bailey's been locked in the pokey for 32 years, and is rumored to be insane. He's the developer of the Nightshade, but never mind. Bailey is the role that made me wish Laurence Olivier were still alive, and not the CGI Larry of "Sky Captain and the World of Tomorrow." I'm talking about the money-hungry, end-of-career Olivier who didn't give a crap. He would have overdone Bailey to the point of horrid excess, which is the perfect place for the character to reside. Hopkins is way too mannered for this insanity—he delivers the respectable, Hannibal Lecter–era Hopkins when we need the dreadful "Audrey Rose"–era Hopkins.

Speaking of Lecter, "RED 2" gives us both cinematic incarnations. In addition to Hopkins, Brian Cox shows up to reprises his role as Ivan, the Russian whose lust for Victoria reaches well beyond the PG-13's boundaries. I wanted more scenes of Ivan and Victoria, because the two actors are at their charismatic best together. Brits and Russians abound in "RED 2": Catherine Zeta-Jones shows up as another Russian operative (the less said about her, the better), and David Thewlis steals his few scenes as a francophile British op nicknamed The Frog.

I regret not asking Jordan his opinion of "RED 2" after it was over. It would have been enlightening, as it seems Hollywood is content to make movies aimed at Jordan's demographic. As for me, I did my homework and watched the original "RED." It was just as stupid as this movie, yet I liked it a little more. Had I seen RED beforehand, perhaps I might have been swayed to a positive review since I would have already been indoctrinated into the series' universe. It's too late to consider my viewing order now. Leaving "RED 2", I had already decided on a 2-1/2 star review, so here it is. 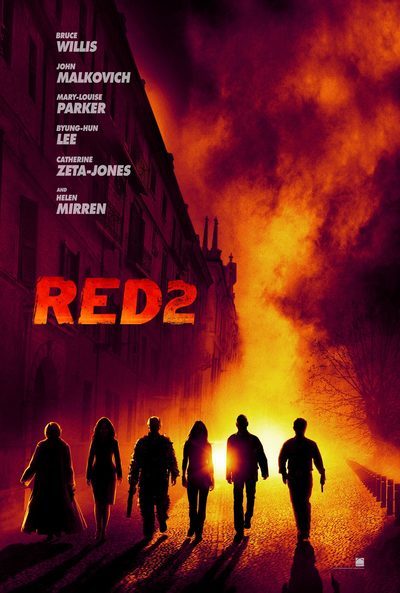 David Thewlis as The Frog