The defiant nuns from the order of The Sisters of the Immaculate Heart of Mary in Los Angeles put their habits on the line to prove that religious devotion shouldn’t equate uncritical submissiveness. During the 1960s, the group stood up to the patriarchal Catholic Church, supported social justice causes, and denounced the Vietnam War. Expectedly, they ruffled plenty of uptight cassocks.

With his aptly titled documentary “Rebel Hearts,” director Pedro Kos (“Bending the Arc”) traces their joyous and fearless evolution as far from average followers of Christ, yet demonstratively more Christ-like than many of their male superiors. Their guiding principle, however, wasn’t to rally against the church, but fend off injustices committed against them and others. They had, and continue to have, a vocation for service.

Kos maintains that position at the foreground throughout. Their objective was reform from within for the benefit of all, but that’s not how some interpreted it. In retrospect, the members of this incendiary generation find humor in the ferocious retaliation of clergy men who weren’t used to being questioned by anyone, much less individuals they saw as subordinates. To see these women be so proud in old age is a mischievous delight.

For the sisters, the personification of the oppressive forces that controlled when they talked, when they prayed, and how they dressed was Cardinal McIntyre. Fixed on forging a legacy building grade schools, he saw them as free labor he could exploit. Forced to teach large numbers of children, double the size of a regular class, they demanded to go to college in order to get the necessary training and carry out their imposed pedagogical jobs.

Several of them earned PhDs and eventually were given the power to control an institution of higher education for women. No longer were they these nuns the severe figures of the collective imagination, but highly educated and lively women teaching other women. But as their curriculum and ideas aligned more with the student and social movements of the time, the general public and McIntyre were scandalized.

In fairness, the filmmaker includes priests who saw the legitimacy of the sisters’ campaign to obtain more autonomy, and other subjects who show compassion towards the rigid Cardinal because he was part of a much larger structure that expected him to rein in his flock by force. Interestingly, the turmoil at the Immaculate Heart of Mary coincided with the Vatican’s efforts to revise its ancient dogma, and make some slight adjustments. Change was bubbling up, and the novices capitalized on that opportunity.

As key narrators of the events, Kos chooses Anita Caspary, a pragmatic, innate leader who combated the attacks with collected diplomatic ammunition, like an archer hitting the target with precision. Then there was Corita Kent, the painter who defied the Cardinal through her political serigraphy work, which pondered how Jesus’ teachings are sometimes twisted for the purpose of religious hypocrisy. She got the most media attention.

Kos utilizes interviews with the sisters who have passed away to include their thoughts verbatim, as well as conversations with those still active in their community. The usage is interesting because he doesn’t denote the date on those clips, and though one can perceive they are older given their grainy quality, by not calling attention to them there’s an almost seamless interaction between the past and the present. We are given the illusion that these conversations are part of a continuum, and that ties well with the notion that their work is ongoing to this day. We see some of the most elderly among their ranks marching for DACA and women’s rights in the present.

In the late '60s, their battleground was their reluctance to continue wearing the outdated, cloak-like habit. Instead, they wanted to experiment with new attires that enabled not only more mobility but also a sense of moving along with the times. But their parental institution, grounded on archaic tradition, didn't respond well. This became an inflection point for them, an instance that would mark a before and after.

Kos conveys the spiritual stakes here as they each recall the eye-opening hardship of coming to terms with the fact that for the church, control meant more than their benevolence, dedication, and faith. He also harnesses animation to add another aesthetic layer with imagery that plays more with silhouettes and movement in expressionistic settings than with physical details or reenactments. Still, even with these welcome flourishes, the approach is generally commonplace, with a focus on the timeline and not as much on expounding on the parallels and the repercussions of their acts for other religious women elsewhere.

But in spite of its form not being as compelling as its subjects, “Rebel Hearts” is still an inspired and inspirational recounting of a historical moment and the women at the center of it. Their divine bravery reminds us that there have always been everyday heroes challenging systems of oppression and that allyship is nothing new. As the film notes, fighting for self-dignity and the rights of others is the holiest of crusades.

Now playing in theaters and streaming on Discovery+ on June 27. 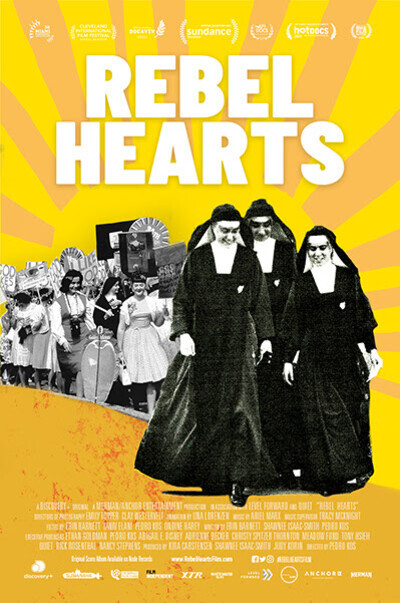 Corita Kent as Self

Helen Kelley as Self

Anita Caspary as Self

Pat Reif as Self