Based on the video game franchise of the same name, "Ratchet & Clank" makes a concerted effort to undermine and joke about the common, generic elements of its story and its characters. It's filled with establishing subtitles, naming some alien planet and then subtitling the subtitle with, say, a countdown to the dastardly villain's inevitable speech that will lay out the details for his wicked plan.

We get a training montage, of course, but it's preceded by a sub-subtitle informing us that one is on the way. During that scene, the unlikely hero gets a chance to test out all of his nifty, new weapons. Eventually, the leader of the team runs out of neat-sounding names for all the cool weaponry, and he's reduced to calling one of them, which fires a sawblade, something along the lines of the "killer buzzing thingy."

The movie's attitude is commendable. It's actually trying to have fun with material that should be fun, and it's also actively making fun of the pieces that are worthy of mockery. It's as innocent in its approach to all of this as a movie that features the destruction of several planets can be, too.

The effort is often obvious, and that means a good number of the jokes are funnier on a theoretical level than they are on a practical one. That's one issue. The other major one is that the humor only goes so far. At some point, the movie has to rely on the things at which it previously poked fun.

Our improbable hero is Ratchet (voiced by James Arnold Taylor), one of the last of his species—a Lombax, which looks mostly like a cat. He works as a mechanic in a desert valley of a planet called Veldin. The movie's bold color palette is striking, and it possesses an admirable level of detail in creating a series of disparate worlds—from the villain's stark headquarters on a mountainous planet to a bustling metropolis that serves as the backdrop for the movie's first action sequence.

Ratchet dreams of one day becoming a member of the Galactic Rangers, an elite quartet of warriors, led by the egotistically dunderheaded Captain Qwark (voice of Jim Ward), who defend the galaxy from evil. After a disastrous joyride in a souped-up flying car, Ratchet's boss/adoptive father Grim (voice of John Goodman), a purplish blob of a creature with dangling ears and tusks, warns the Lombax that he needs to lower his expectations for what he can get out of life.

The villain of the tale is Drek (voice of Paul Giamatti), an industry titan with a pear-shaped head and flattop haircut who rides around on a hovering cart. His plan is to annihilate a series of planets, take the best sections of the ruins, and piece them together into the utopia of his dreams. In the meantime, he has to worry about the fact that his henchmen are more concerned with their cellphones than they are with his orders.

Drek's right-hand robot is Victor Von Ion (voice of Sylvester Stallone), who longs to see real battle, and his mad-scientist partner-in-crime is Dr. Nefarious (voice of Armin Shimerman), who sees himself as more "vengeful" than "mad." Ratchet's eventual, pintsized sidekick Clank (voice of David Kaye) is a defective model in Drek's army of robots. The cute little guy with a matter-of-fact way with words and statistical probabilities of failure escapes the assembly line. Clank makes an emergency landing on Veldin, where Ratchet learns of Drek's evil plan and is determined to stop the bad guy—hoping to become a member of the Galactic Rangers in the process.

There's a constant sense of competing goals in the screenplay by T.J. Fixman (a regular writer for the game's series of sequels), Gerry Swallow, and director Kevin Munroe (Jericca Cleland served as the movie's co-director). It maintains a fairly consistent sense of humor, especially as Ratchet becomes an instant celebrity, pushing the insecure Qwark out of his accustomed spotlight, and begins his Ranger training. Once the plot moves past this section, though, it essentially falls into the trap of following an established pattern. There are land battles, dogfights among the stars, betrayals, and the usual stuff of space operas.

The joking becomes secondary to the need to hit the very elements of plot and character that the movie tries so hard to undercut. In terms of character, Qwark's oblivious hero-in-his-own-mind, Clank's trusty sidekick, and Drek's quirky scoundrel are highlights. The rest of the Galactic Rangers (voiced by Rosario Dawson, Bella Thorne, and Dean Redman) feel like afterthoughts in search of personalities beyond the soldiers' constant need to shoot something. Ratchet is perhaps most notable as a hero for the plasma-beam grappling hook he possesses.

There's a fair amount to appreciate about "Ratchet & Clank," especially its desire to send up the genre conventions at play here. It's a shame, then, that the movie ultimately finds itself becoming so conventional. 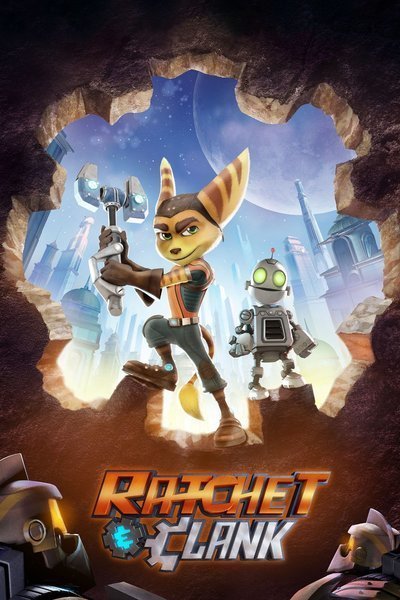