Indian melodrama "Rangoon" somehow manages to be emotionally resonant despite being overstuffed. This is no small feat given how many different genres, tones, and characters this film juggles.

"Rangoon" is, among other things, a politically naive WWII drama, an infectious putting-on-a-show musical (complete with accomplished song and dance numbers), and a soapy menage-a-trois romance between an actress, a director, and a soldier. It is immodestly scaled and frequently implausible but manages to be far greater than the sum of its parts. "Rangoon" is also that rare Indian film I can recommend to anyone who isn't necessarily already interested in Bollywood or Hindi-language cinema—despite its myriad little flaws, it's a charming crowd pleaser.

Directed and co-written by Vishal Bhardwaj (Indian Shakespeare adaptations "Maqbool," "Omkara" and "Haider"), "Rangoon" is a movie that does not make significant political or narrative sense since it's essentially a big bowl of cinematic Neapolitan ice cream, except all three flavors are mixed together before-the-fact. Events kick off with a brief (and oversimplified) historical primer on the Indian National Army (INA) and its drive to take India back from the British by joining the Japanese in their fight against the Allies. The INA is not accorded much political importance by their Japanese allies, so they're forced to fight the Brits through counter-intelligence and espionage. But there are Indian soldiers, like Nawab Malik (Shahid Kapoor), fighting the Japanese as well. These guys are also essentially expendable, as we see when Nawab is immediately captured by Japanese soldiers after his fellow soldiers abandon him.

Meanwhile, a stunt-woman and movie star named Julia (Kangana Ranaut) has been tasked by her filmmaker paramour Rustom "Rusi" Billimoria (Saif Ali Khan) with entertaining British troops in Burma. Rusi has a stump for a right hand and an unhappy, financially independent wife. But he's not just a cad: Rusi is a British collaborator who makes deals whenever he knows he can't get away without them. This trait is one that Rusi will eventually be disabused of, making him the strongest character in "Rangoon." But in the beginning he's just an emotionally unavailable tycoon who treats his mistress Julia like a pawn, and accordingly fails to anticipate that somebody else—like Nawab, who serves as Julia's bodyguard during her tour of Burma—might win her over if he doesn't act fast.

Nawab is probably the weakest of the film's three characters since his inner life is  taken for granted. There's a portion of "Rangoon" where he takes center stage, though, and it plays out a bit like "The Bodyguard" meets "Rambo: First Blood Part II." Nawab and Julia bond after they're separated from the British army, and must fend for themselves for several days, searching for food and shelter in Japanese bunkers and bombed-out Burmese villages. This section of the film is a bit creaky, but it's ultimately effective because it establishes Nawab as a sympathetic man of action who cares about prisoners of war. It also features a genuinely sexy moment between Khan and Ranaut: Nawab takes his time examining her naked back for leeches, uncovering a scar just over her hips.

"Rangoon" loses a bit of its narrative simplicity once Nawab and Julia return to the British camp, and the film gravitates towards Rusi. This wouldn't be such a bad thing if Rusi wasn't, for most of the film's second half, such a generic jealous lover. He flies into a tizzy when he notices Nawab and Julia's furtive glances and not-so-secret rendezvous, though it takes some time before he decides to act on his feelings. The film uses Rusi, Julia and Nawab's love triangle to examine a divided country's conflicted feelings about being subjugated by foreign powers. Julia resents Rusi's insistence that she is his creation, while Rusi grows to dislike being told what to do by cartoonishly evil British General Harding (Richard McCabe). Nawab, a British POW forced to fight against his fellow countrymen, has his own baggage, but it's hard to get into that without giving away a key plot point.

The most remarkable thing about "Rangoon" isn't how seamless its plot mechanics are or how ideologically nuanced it is; it's the movie's determination to foreground its characters and get you to care what happens to them. This is a convincing love story featuring catchy songs and well-choreographed dance numbers, and it features a heroine who isn't just a cliched harpy one minute and ass-kicker the next. "Rangoon" may climax with showy war-movie pyrotechnics and a showdown that leaves more main characters dead than alive, but even that succeeds because Bhardwaj and his co-creators make sure you're invested in the film's ever-escalating stakes. 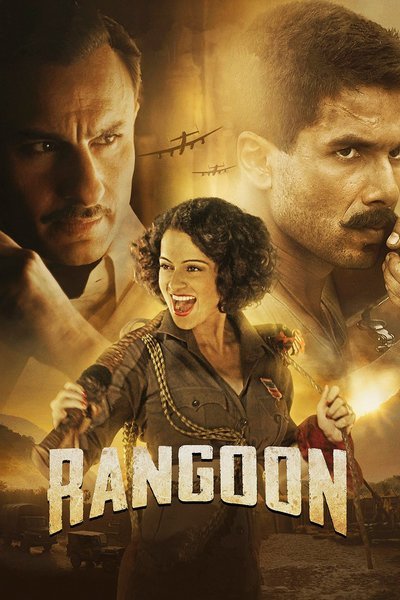