Before addressing the elephant in the room, as it were, there's a lot to like in “Ramaiya Vastavaiya.” It's a throwback to classic 90s Bollywood romances, with their radiant colors and music, and their defiantly anti-cynical melodrama. As such, the fact that it's an old-fashioned film actually works to its advantage, with the romance track, comic relief characters, songs (fine if not terribly memorable) and broad-strokes class commentary all co-existing neatly and smoothly under the guiding hand of director Prabhudeva. In short, it's as ideal a vehicle with which to launch a new star as one could hope for: a familiar-enough frame of reference for mass audiences that they know who the hero is; the only question is, is the actor playing him up to the task?

The answer, unfortunately, in “Ramaiya Vastavaiya” is a resounding “no.” Girish Kumar, the romantic lead, is the son of the film's producers, and has been training for this role for several years. It's a bit painful to have to say about an actor who seems like a nice young man in the publicity he's done for the film, but he's not very good. He has all the help money can buy, but for pretty much the entire first half of the story, his non-stop over-the-top mugging and faffing about reaches levels of irritation few screen actors have ever attained. When his immature billionaire's son, Ram, manages to get Sona (Shruti Haasan, eminently patient with her inferior co-star) to fall in love with him, one seriously questions why. Ram is a pill in his own right, but the actor playing him has a mistaken impression that “manic cartoon character” is synonymous with “charming.”

In spite of this, “Ramaiya Vastavaiya” manages, by sheer force of directorial and supporting cast willpower, to become a serviceable piece of light entertainment. Its “rural orphan girl goes to her friend's wedding with the blessing of her protective older brother, meets rich flibbertigibbet boy, falls in love, both families disapprove” story is familiar without being rote, and with so much focus on families, there are plenty of other characters for the audience to enjoy if the hero gets too irritating. Also, after the interval, Girish Kumar ceases to overact, as Ram's love for Sona forces him to mature rapidly, making him a far more tolerable presence. By the end, we're even rooting for him.

The supporting cast does such a good job of supporting that one forgets just how bad the lead had been two-plus hours earlier. The standouts are the great Vinod Khanna, in a small but crucial role where he essentially stops the movie in its tracks at a key moment and explains to Sona's brother Raghuveer (Sonu Sood) that the movie depends on him letting Ram marry Sona, because it's a movie and, even though the kid can't act, movies tend to have happy endings. (Vinod Khanna gets to essentially break the fourth wall to explain things like this because it's Bollywood and he's Vinod Khanna and that's that.) As Sona's brother, Sood has such gravitas and charisma that he essentially carries the film as an auxiliary hero. He's solely responsible for making a film with one of the worst lead performances in years feel emotionally satisfactory.

“Ramaiyana Vastavaiya” is in the unfortunate position of being a well-made piece of popular entertainment that fails in its most essential purpose: as a film made expressly to launch its male lead to stardom, it can't be regarded as a full success if it fails to do so. Girish Kumar has a lot more work to do, beyond the enormous amount he's already done to get this far, to be a viable leading man in Bollywood. If he succeeds in that quest, one hopes it's because he improves as an actor, rather than because of family connections. 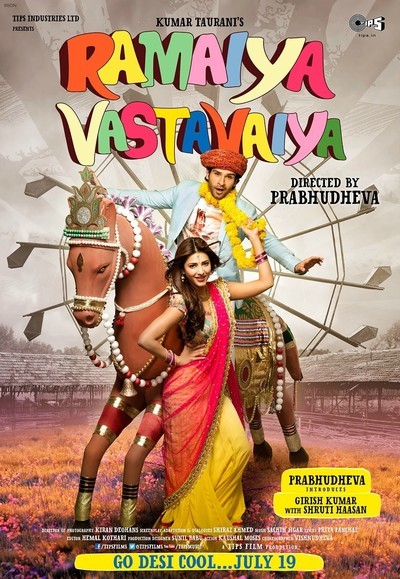