"Raise the Titanic" is almost a good movie. It has some wonderful moments, but they're bogged down in two moronic subplots. Why is it that they always gum up great movie Ideas by shoveling in those two infallible dead-ends, The Girl and The Russians?

The movie's basic premise-that it might be possible to raise and salvage the great ship Titanic-is irresistible. We get some hot scientific gobbledygook about how the Titanic might really be in pretty good shape, down there two miles below the frigid Atlantic, where it wouldn't rust because of the oxygen shortage in the water.

Maybe so. The plan to float the Titanic sure is ingenious: Pump it full of plastic foam, attach giant inflatable balloons to its sides, and blast it free of the mud. Easy as pie. Reminds me of an old Uncle Scrooge comic in which Huey, Looey and Dewey were going to raise a sunken ship by pumping it full of Ping-Pong balls.

"Raise the Titantic" is best when it sticks to the subject. The movie succeeds in recreating some of the romance of the Titanic itself. It begins with old photographs of the great ship and with a sneaky preview shot of the ship in its watery grave. The plan to raise the ship involves the use of experimental Navy submarines, and the sequences devoted to the search are tightly directed and effective.

The payoff scenes work, too: The moment when the Titanic breaks the surface of the water is really very moving. And so is the shot of the ship being towed into New York Harbor. Some reviews of the film have criticized the special effects in those shots, but I thought they were pretty good.

I mean, of course they're using combinations of a smaller ship, scale models, tricks of perspective and special optical effects-but what'd you expect? The Titanic? If you're not prepared to go halfway with a movie named "Raise the Titanic" you are possibly in the wrong movie to begin with.

So I liked the stuff involving the ship. What I didn't like was the movie's compulsion to lay on all sorts of "human interest," as if raising the Titanic weren't enough. Why don't they just once make a thriller that's about its premise from beginning to end? Why didn't they have the narrative discipline to really go into the history of the Titanic, the odds on its still being intact, the ways of salvaging it?

The newspapers have been full of stories recently about an actual expedition to find the Titanic, but this movie would rather blast us with a lot of hot air involving (as I was just lamenting) The Girl and The Russians.

What would hack screenwriters do without them? The Girl is the lovely Anne Archer, who plays a reporter for the Washington Star. She's the girlfriend of one of the guys behind the expedition. It turns out, of course, she is also the former girlfriend of another guy on the expedition. This other guy's name is priceless, even in the annals of pulp: "Dirk Pitt."

Anyway, after The Russians discover the secret U.S. plans to raise the Titanic, they leak the story to The Girl (for no apparent reason), and then she fights with her boyfriend. So what?

The Girl's completely unnecessary, as are all of her scenes, especially one in which she and her boyfriend go fishing all the way out in the country, just so a helicopter can immediately turn up with orders to take the guy back to town. The Russians are also unnecessary, and so is the basic premise of the plot.

The late Alfred Hitchcock had something he called "the MacGuffin," which was whatever it was in a plot that everybody was concerned about. The MacGuffin this time is a rare mineral that the U.S. needs in order to power an impregnable laser defense system. The Russians want the mineral, too, and try to capture the Titanic after it's raised.

All of this is, of course, completely ludicrous. And the scenes of the Russians standing around saying sinister things are terminally boring. Who needs this weird mineral as an excuse to raise the Titanic? Wouldn't the salvage alone be worth it? Or why couldn't they just raise it in the spirit of Edmund Hillary, just because it is there? 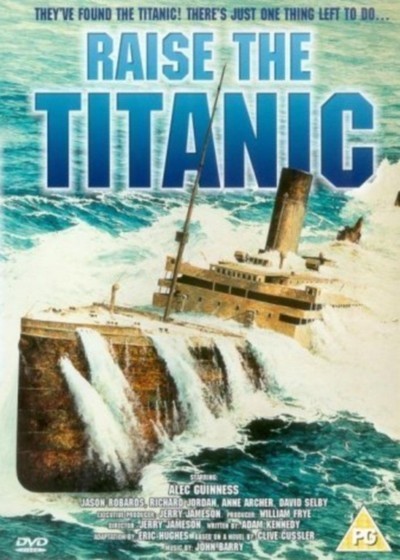