"Rainbow Time," the latest Duplass Brothers-produced indie, is about men being boys, told with a heavier hand than usual. Writer/director Linas Phillips plays Shonzi, a 40-year-old man with developmental disabilities who's introduced with a fascination for all things comically masculine: breasts, guns and the Fonz. He lives at home with his father Peter (Tobin Bell, excellently cast as a dad who loves but does not coddle), and makes homemade action films with his brother, Todd (Timm Sharp). His latest project is “Rainbow Time,” which excites Shonzi particularly because Todd’s girlfriend Lindsay (Melanie Lynskey) will be involved. Todd understands his brother's perversions and boyishness, while energy crystal-hawking Lindsay counters Shonzi's creepiness with huge empathy.

With the separate story of Todd and Lindsay, Phillips shows interest in focusing on the tension within small stories. The central conflict between Todd and Lindsay is that Todd is uncertain how to convince Lindsay to let him film them having sex, a fetish he developed with ex-girlfriends but of which Lindsay is not interested. Early into the film, for sake of his sexual curiosities and to help his brother, Shonzi secretly films the couple fooling around, until he’s caught, and makes everything awkward. When Peter has a heart attack and Shonzi has to stay with Todd and Lindsay, things get even more awkward.

While it struggles to make something of that pitch, writer/director Linas Phillips has successfully made a movie that is unusual. His story about a developmentally challenged individual is less politically correct, and kinkier, than any movie that might even be comparable. But foiled by a weak imagination and clear limits to its awareness, “Rainbow Time” doesn’t become the strong feminist statement it ultimately wants to be. This is despite Phillips’ pointed creations: Shonzi's parody of a bro who thinks of women as body parts, his brother who wants to “own” a piece of his girlfriend by filming himself having sex with her, and a very welcoming woman (Lindsay) who is introduced by showing Todd what she made for work—a viral video of women being catcalled on the street. The film is more original than it is clever, which oddly becomes cloying throughout.

To the detriment of its humor and heart, "Rainbow Time" never establishes a strong tone. Shonzi’s misogyny is played for a type of shocking humor, like when he sexualizes his niece in a crayon drawing at the mere sight of her body in a bikini. The results are not funny but uncomfortable, both for a man sexualizing his niece, or the writer/director who using developmental disabilities as a very dangerous metaphor for the man-child. While Phillips’ embodiment of developmental disability does come with a comforting lack of showiness, “Rainbow Time” made me miss the skill in something like “Step Brothers,” which uses performance and acute character detail to make it believable that 40-year-old men would not have matured past a certain age. We can at least be glad that "Rainbow Time" is more laugh-less comedy than vanity drama.

Phillips’ film is at its very worst when it errs on being a parable of how not to treat or look at women. As entirely vital as these ideas are, and how active Phillips seems to be consciously making a movie for an audience instead of just himself, one wishes that Phillips as a filmmaker thought of a better way to engage it. In a disastrous moment, Phillips piles all of his heavy-handed character attributes into one scene, in which Lindsay has Shonzi interview women about the way they are treated by men. Shonzi isn't immediately cured of his ignorance, but that is not the point. For a movie that has a huge problem with both a belittling, obvious agenda and a way to express it artistically, this scene brings “Rainbow Time” to cringing levels of self-righteous wokeness.

The intent backfires so much that the movie makes a mouthpiece out of Lynskey, who statistically may be one of the most down to Earth actresses in the business. Along with getting most of the movie’s egregious ADR inserts (showing the film’s subconscious indifference for what she has to say), Lynskey’s character reveals the limits to the movie’s self-awareness. When Todd or Shonzi need to learn something about themselves or their interactions with women, she acts as their mother, patently doting on them while the score suggests the script's sincerity. There are many times where her patience with the men snaps the script's explanation of her being new age-y and "open." “Rainbow Time” is adamant enough about showing gender inequality, but its climactic emotional scenes are entirely in service of a boring, sensitive masculinity. 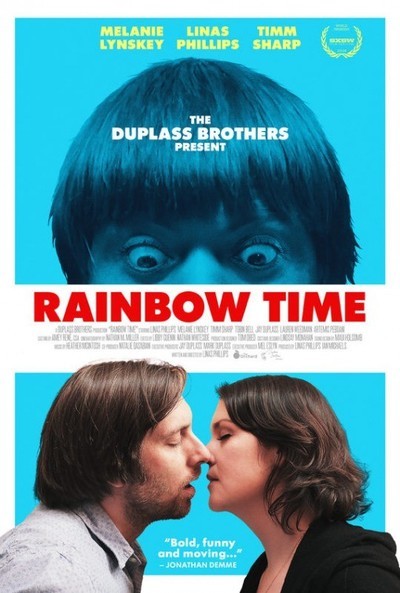