With the good intentions of a Steven Soderbergh anti-capitalist thriller but the tepid execution of a mid-season-replacement CW teen drama, “Radium Girls” shines a light on a rarely discussed chapter of America’s labor history. Based on the true story of a group of young female factory workers in the 1920s who began developing mysterious, devastating illnesses, “Radium Girls” is bogged down by a trite script, inconsistent character motivations, and an over-reliance on historical footage that has little to do with the film itself. The anger inspired by what happened to these women is invigorating, but that fury is rarely felt from what “Radium Girls” offers as a cinematic experience.

In the early 20th century, the discovery of radium and polonium by Marie Curie led to a boom in commercial products that boasted of radioactivity as a phenomenon that was invigorating for the human body. Marjane Satrapi’s biopic of Curie, “Radioactive,” portrayed the scientist’s guilt later in life after countless workers around the world became sick from producing products laced with radium: nail polish, chocolate, face cream, toothpaste. Before the determination of their toxicity, though, these items were part of a bona fide craze, and provided valuable factory jobs to women increasingly joining the work force after the devastation of World War I.

“Radium Girls” transports us to that time: In Orange, New Jersey, in 1925, sisters Josephine (Abby Quinn) and Bessie (Joey King) work for the company American Radium (standing in for the real United States Radium Corporation, which operated from 1914 to 1970). Alongside dozens of other women cramped together in the same room, overseen by stern team leader Mrs. Butkiss (Carol Cadby) and distant factory manager Mr. Leech (Scott Shepherd), Josephine and Bessie paint the numbers on watch dials. The workers, in their teens and twenties, are given a tiny paint brush and a vial of Undark, a glow-in-the-dark paint made with radium, and encouraged to lick the brush in between each swipe to make their movements more precise. Lick, dip, paint; lick, dip, paint; all these young mothers and daughters and sisters and wives are desperate to keep their jobs, doing whatever their employers want.

Rule follower Josephine, who loyally licks her paint brush, is the factory’s best, producing more than 200 faces per day. At one cent per face, it’s still not much—but her take-home pay is certainly more than Bessie’s daily average of 40. In great chunks of exposition, Ginny Mohler and Brittany Shaw’s script reiterates how the sisters are different: The responsible, no-nonsense Josephine keeps their household running, stepping up after the deaths of their parents and older sister. Co-directors Mohler and Lydia Dean Pilcher emphasize her frowns at a radio their grandfather buys on credit, her frowns as she balances their finances, her frowns when Bessie suggests sneaking back into the factory for a séance. Bessie, meanwhile, is the wild and spontaneous one: She dreams of being an actress, she dares to talk back to Mr. Leech when he questions her work, and she catches the eye of photographer Walt (Collin Kelly-Sordelet), a member of the local Communist Party chapter.

Still, the girls are committed to each other—with a shared interest in spiritualism and Egyptomania, captured by their constant consultation of “The Book of the Dead”—and when Josephine falls mysteriously ill, Bessie vows to take care of her. Their sister Mary died after working at American Radium; could their workplace be the culprit? The doctor American Radium sends to inspect Josephine says she’s “healthy as a horse,” but the bloody teeth falling out of her mouth say otherwise. When Walt suggests Bessie meet with a representative from the Consumers League, the sisters learn that radium is being reconsidered as an industrial toxin—and that American Radium might have been aware that Undark was poisonous. With that knowledge and with Josephine’s health in rapid decline, Bessie undergoes an incremental, but steady, radicalization that eventually leads to her facing off against American Radium in court.

The revelations at the center of “Radium Girls” are enraging reminders of high-risk labor conditions, our societal disregard for women in the workplace, and how corporations use the respect reflexively given to supposed authority figures—bosses, doctors, police officers—to protect their own misdeeds. But the scenes that underscore those realizations lack impact when “Radium Girls” buries them under bickering between the sisters, who seem to switch characterizations often during the film’s first hour; a listless romance between Bessie and Walt, whose sole responsibilities include wearing a red scarf to remind us of his Communist affiliations and popping up at random locations to offer Bessie a hug; and a misguided subplot focusing on the other Communists.

The Party members given the most screen time are Black Americans Etta (Susan Heyward) and Thomas (Brandon Gill), which is an acknowledgement of the work the Community Party USA did in Black communities and in support of the labor and civil rights movements, but the two have no personalities of their own. Everything they do is in service of Bessie’s development, and sloppily so. Thomas’ speech in support of Nicola Sacco and Bartolomeo Vanzetti helps her realize that people can be judged for their political beliefs, but that has no noticeable effect on her personality. Neither does Etta’s harrowing tale of escaping the 1921 Black Wall Street Massacre in Tulsa, Oklahoma, told to Bessie after the former is arrested alongside the radium girl during a police raid. Those characters just fade into the background after they help Bessie rapidly transform into a revolutionary, replaced by the other radium girls who join Bessie in her lawsuit. Once “Radium Girls” shifts into that final third act, it too often slips into anachronistic vernacular and modern messaging, like urging people to vote, that feels out of step with what actually worked at the time. Collection action and labor organization were integral in emboldening workers’ rights in this country, but “Radium Girls” is more interested in a “Law and Order”-style format that relies on contentious cross examinations and dramatic reveals.

Admittedly, there’s some intermittent thrill to that; “Radium Girls” is at its best when it makes clear what the girls were up against. Men who refuse to identify themselves appearing unannounced on the sisters’ doorstep to offer them a payoff. Josephine and Bessie’s former coworkers, who haltingly say that their husbands told them to disregard the sisters’ claims. A doctor who blames “personal hygiene” on the girls’ failing health, weaponizing the conservativism of the time to cement their ostracization. King and Quinn don’t quite demonstrate the debilitating impacts of these attacks; they’re both out-acted by Colby Minifie as Doris, a family friend and former radium girl who joins their lawsuit (her cheeky “In a past life, I was a lawyer, but there was just so much shouting” is the film’s best line delivery).

When “Radium Girls” centers these young women, it has a clear focus—which makes Pilcher and Mohler’s constant insertion of historical B-roll a distracting interruption. The black-and-white scenes of cities teaming with people, women working in factories, and protests spilling into the streets lack context, and often feel like a wasted opportunity to further ground this film in the real events that inspired it. Is any of this actual archival footage related to the radium girls or their lawsuit? What about a picture of a group of women posing in a factory together? Are the letters that Bessie and the other radium girls receive and read out loud, with lines like “Thank you for standing up for us,” actually from that time? “Radium Girls” is on the right side of history in its championing of these women who fought back against an employer and an industry that was killing them, but the film’s missteps hint at a broader story left untold. 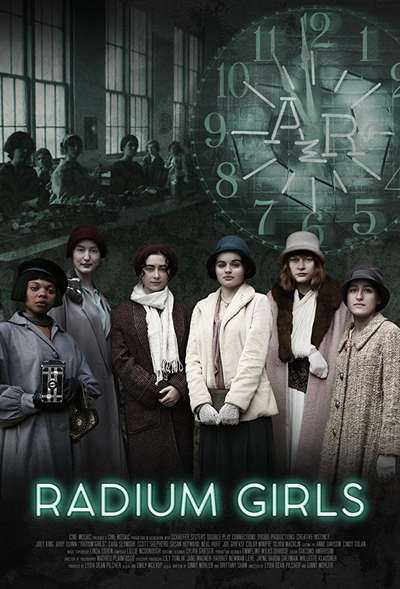