In telling the story of Marie Curie, director Marjane Satrapi seems similarly driven to blaze a bright trail of her own. With “Radioactive,” Satrapi eschews traditional biopic notions in favor of a more daring approach. But the execution is frustratingly inconsistent, with a time-hopping structure that’s more jarring than thrilling.

Rosamund Pike remains magnetic throughout, however, as the brilliant, two-time Nobel Prize-winning physicist and chemist. “Radioactive” gives her plenty of room to be feisty and no-nonsense, fragile and impulsive. Pike is great in everything and has demonstrated dazzling range, from “An Education” to “Gone Girl,” and she’s more than capable of convincing us as Curie that she’s the smartest person in the room at all times—male or female. And so it’s disappointing that she’s saddled with so much insipid, expository dialogue in Jack Thorne’s script, particularly in the film’s first half. The young Polish immigrant born Maria Sklodowska and the man who goes on to become her lab partner, husband and the father of her two daughters, French scientist Pierre Curie (Sam Riley), spend so much time standing around explaining technical things to each other (as well as their feelings) that it almost plays like an episode of "Drunk History."

“I came all the way from Poland to study science!” she laments to her sister after the stuffy, old, white men at the University of Paris shut her out of her lab for her unorthodox pursuits. Later she insists: “I will find my own way.” But Pierre Curie is also a bit of a pariah—he woos her at a nightclub by complimenting her on the paper she wrote about the kinetic properties of steel—and when they kiss for the first time, there is literally a giant flame in the background burning brightly between them. Riley, so stirring as the troubled Joy Division lead singer Ian Curtis in “Control,” brings a steady calm that’s just the right counterpoint to Pike’s proud intensity.

“Radioactive” briskly hits the notes you might expect: the growing acclaim and fame, the prestige of the Nobel Prize for physics (which Pierre insists on sharing with Marie, who initially isn’t honored), the birth of their children, the tragedy of Pierre’s death. But in between throughout Thorne’s script, “Radioactive” lurches forward to show that for every accomplishment, there awaits a repercussion of their scientific discoveries, some of which are disastrous. Marie Curie proudly announces that she and Pierre have found two new elements—radium and polonium, the latter of which is named for her home country—and the film leaps ahead in time and place to 1957 in Cleveland, Ohio, where a doctor is explaining to a worried father that a new process called radiation can help save his little boy who’s suffering from cancer. As Pierre accepts the Nobel in Stockholm in 1903, we see the Enola Gay preparing to drop the atomic bomb on Hiroshima in 1945. The most drastic of these interludes—despite the seamless artistry of its visual depiction—comes when Marie is at her lowest, sobbing in the street in the dead of night in a stranger’s arms. Just then, a fire truck zooms by on its way to the Chernobyl nuclear meltdown of 1986, yanking us out of a raw, vulnerable moment and undermining a moving piece of acting on Pike’s part.

The ambition of this storytelling approach is intriguing—and the instinct to avoid a linear, paint-by-numbers narrative is certainly appreciated—but the result feels both scattered and painfully literal, and it saps the momentum Satrapi has built. She proved with the autobiographical, strikingly animated “Persepolis” what an innovative creator she is, but the conceit here feels misguided.

Still, “Radioactive” is consistently gorgeous to look at, the work of the great Anthony Dod Mantle, Danny Boyle’s usual cinematographer and an Oscar-winner for “Slumdog Millionaire.” Bold beams of white light stream into the Curies’ laboratory, providing a dramatic vibe to what could have been dry material. A flash-forward to a Nevada desert town that’s been set up for the express purpose of being flattened by a nuclear test blast is especially startling—a stark mess of melting plastic and smoldering ash.

“Radioactive” gets better in its second half when Curie is forced to face dark, prickly emotions and find a new identity on her own as both a professor and the mother to a budding scientist (Anya Taylor-Joy in a too-brief performance as Irene Joliot-Curie, who won her own Nobel Prize for chemistry in 1935). She becomes more interesting the less sure she is of herself, and at one point says to longtime friend and fellow scientist Paul Langevin (Aneurin Bernard): “I’m bored of strong. I don’t want to be strong, I want to be weak.” Ah, now we’re finally achieving a level of complexity worthy of such an icon.

Available on Amazon Prime on July 24. 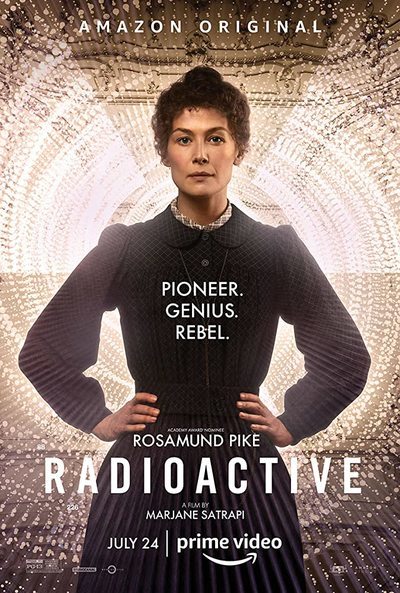