“Rabid” definitely feels like a remake of a 1977 horror cheapy directed by a young David Cronenberg. Co-writer/director team Jen and Sylvia Soska, with the help of co-writer John Serge, have only superficially updated Cronenberg’s “Rabid,” a B-movie about the dehumanizing effects of a vampire-like epidemic. The Soskas’ revamped “Rabid” is still worth seeing because they have a wickedly funny sense of humor, and a few winningly nasty ideas about how their obsessive characters would only grow more selfish during a crisis. But: the best parts of “Rabid” are often overshadowed by tired jokes about the cut-throat fashion industry (the movie’s heroine is a wannabe clothing designer), and the predatory nature of self-styled artists. There are a lot of promising ideas here, but none are developed so much that this remake feels essential.

“Rabid” begins with the first of a few endearing, but forgettable tributes to Cronenberg’s movies: a motorcycle almost spins out of control, like it does at the beginning of the original 1977 “Rabid.” The motorcycle is driven by Rose (Laura Vandervoort), a scarred fashion designer who’s initially defined by how defensive she feels at work (ex: she’s a vegetarian, eek!). Rose feels singled out by her blowhard boss Gunter (Mackenzie Gray), a stereotypically oily Euro-trash aesthete who would fit right into “Zoolander.” Rose is also mocked by her peers, like Bev and Ellie (the Soskas), who pick on the blemish covering Rose’s forehead (“Scarface”) whenever they’re not snorting cocaine or physically bumping Rose out of the way in their haste to enter a popular Canadian night club. “Rabid” isn’t a period piece, though it sometimes feels like one.

Soon enough, Rose inadvertently succeeds at getting into a motorcycle accident, leaving her horribly maimed; her jaw is wired shut, and some of her intestines have been ripped out. Rose’s recovery is sped up considerably by aspiring model and BFF Chelsea (Hanneke Talbot), as well as some radical reconstructive surgery from Dr. William Burroughs (Ted Atherton). But, while Rose is now turning heads—including Gunter, who gives her a rare opportunity to develop her clothing designs for his “Schadenfreude” collection—she’s also ripping out the jugulars of insecure alpha predators like night-club brute Billy (CM Punk) or narcissist soap opera star Dominic (Stephen Huszar). Because Rose, like Chambers’s character in the original “Rabid,” has contracted a weird strain of vampire-like bloodlust, an association that’s spelled out in the scene where Dr. Burroughs listens to the other William Burroughs read a passage about vampires in his spoken-word piece, “Advice for Young People.” That allusion is a bit too blunt to be clever, but it is kind of charming as a side-long tribute to Cronenberg’s own “Naked Lunch” adaptation.

Less thrilling: heavy-handed dialogue that’s neither provocative nor cruel enough to be effective as sandwich-board speechifying. Gunter’s dialogue is especially bad, though Gray puts an appropriately loopy, Udo Kier-esque spin on lines like, "I do not mean to die for fashion, but this fashion is to die for, mmm.” Other declarative statements are not as easily salvaged, like when Rose tells hunky, pure-hearted photographer love interest Brad Hart (Benjamin Hollingsworth) that “I just love the way that the clothes make me feel. You can literally be anybody, become any thing. It's like armor: when you walk out the door, you're arming yourself." His response—“For me, true beauty lies in the things we have yet to uncover”—wouldn’t be so unfortunate if the Soskas viciously laid into him more later on (or her, for that matter).

There are a number of dark, and grimly funny ideas in the Soskas’ “Rabid,” but their vision isn’t strong enough to tie them all together. Rose and Beverly’s relationship is especially under-developed, which robs a climactic moment of its slam-the-brakes power. The movie’s irruptive sense of gross-out humor also never really seems fitting given the goofy targets of the Soskas’ derision. One minute the characters are struggling to explain—at length—how they’re feeling, and then the next minute, there’s a monstrous appendage coming out of Rose’s head (weirdly reminiscent of a certain infamous Jamaa Fanaka movie).

I wanted more where that came from, or maybe a more thoughtful gutting of the hand-me-down tropes that Cronenberg previously attacked. But the Soskas’ signature fascination with transhumanism and body modification doesn’t travel very far here (then again, it doesn’t go far in Cronenberg’s “Rabid,” either). The Soskas’ are, however, smart to play up the melodramatic elements of Rose’s story, so that she’s more like Carrie White (Cronenberg originally hoped to cast Sissy Spacek because of her performance in “Carrie”), just as they consummately play up Dr. Burroughs’s Frankensteinian ambition as a riff on the blinding hubris that motivates Oliver Reed’s Hal Raglan in Cronenberg’s “The Brood.” But, while “Rabid” is a faithful homage, it doesn’t hang together the way it should. 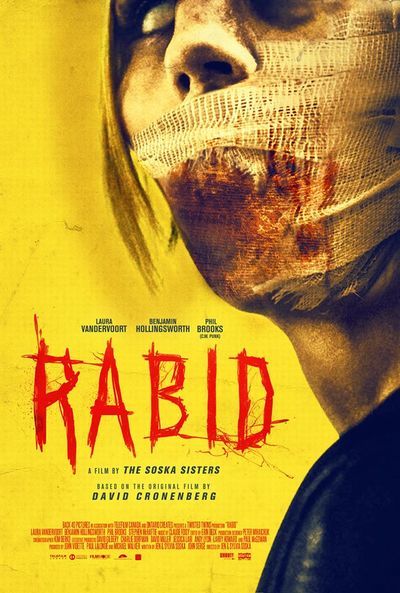