Jasmila Zbanic’s “Quo Vadis, Aida?” is a razor-sharp incrimination of failed foreign policies from around the world embedded in a deeply humanist and moving character study of the kind of person that these policies leave behind. It’s a very specific story of war crimes in 1995, but it feels also like a modern commentary on how often foreign policy and U.N. intervention fails to see the human lives caught up in their decision making, and so often in their inability to make those tough decisions quickly and empathetically. Taut and intense, this is the kind of film that a critic hopes finds a broad enough audience to provoke conversation and insight about how we fix these broken systems. It truly feels like Zbanic’s work here could effect change if seen by the right people.

Aida (a fantastic Jasna Djuricic) is a translator for the UN in the town of Srebenica in Bosnia in 1995 in this true story. At that time, a war between the Serbians and Bosnians had led to incredible bloodshed but the Serbians were at a point wherein they overtook Srebenica, leading the UN soldiers and locals there on their heels when it comes to what happens next. As the gun-toting Serbians approached Srebenica, thousands of local Bosnians tried to enter a UN base camp there, with only a few hundred let in before the gates were closed, leaving so many men, women, and children outside, wondering what to do next or where to go when the only place they’ve been told would be safe won’t let them in.

With inside knowledge of how negotiations and planning (or lack thereof) are going between the UN leaders and Serbian army are going, Aida senses that everything is about to get much worse. Tension is rising in the camp from the beginning, as there are no facilities or rations for the people who have come there for safety, and Aida struggles at first to get her husband and son from one side of the gate to the other, even knowing that nothing is fixed when she does. “Quo Vadis, Aida?” is one of the best films ever made regarding shifts in power, and how this kind of nightmare often unfolds with slow, deliberate actions instead of the standard quick pace of action filmmaking. Aida can see how increasingly dangerous the world around her is becoming, but bureaucracy and confusion keep halting any efforts to stop it.

One of Zbanic’s smartest decisions is to regularly center Aida’s POV exclusively, keeping us invested in her decisions and actions. Other than an extended negotiation with the Serbian army leader with a few locals, including Aida’s husband, Zbanic stays alongside Aida for most of the films’ runtime. Meetings that could determine the fate of her family take place behind closed doors, and we can feel Aida’s rising panic and concern, knowing in her heart that the UN workers to whom she has been so loyal will likely not do enough to save her family. Zbanic’s film is clearly about how often policy and inaction can lead to tragedy on an individual level, but she makes that point without feeling didactic about the messages in her movie. She allows them to emerge from story and character, resulting in a film that moves instead of manipulates. As her situation feels more and more desperate, we get more and more invested in Aida’s fate and that of her family.

Despite Aida’s unique situation in that being a translator gives her access, there’s also a sense of a broader canvas at work in this story that’s essential to its success. There are several shots of dozens of human beings filling the frame, either in the base or waiting outside for an answer about their fate. All of them are being let down by policies that may have given a warlord an ultimatum but then did nothing when he ignored it, and now they are stuck in the middle, between a conquering enemy and a supposed ally who has no idea what to do next. There are Aidas all over the world—people who can see all sides of the situation, and people who realize there’s no one there to stop the bloodshed.

This is a film about almost unimaginable war crimes—the murder of thousands of innocent men—but it places that international story in a deeply human context. We often read about these dark chapters in history and the kind of horror that took place in Srebenica can be hard to really wrap you brain around. “Quo Vadis, Aida?” is daring enough to not only ask how this kind of thing happens, but to interrogate how easily we move on from these kind of war crimes, going back to daily life in the same places where so many ended.

Opening at the Angelika Film Center today, March 5th, and on VOD on March 15th. 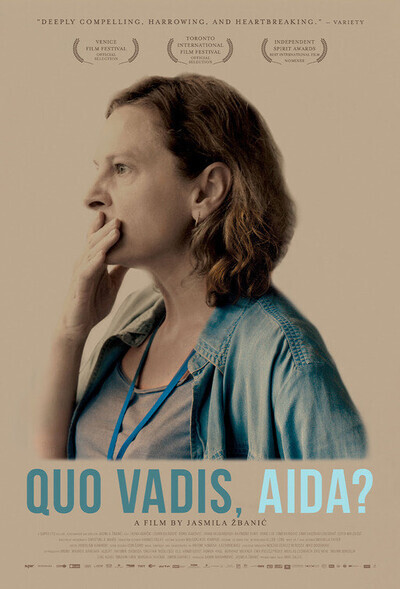