There are basically two ways to regard “Quest for Fire.” The movie is either (a) the moving story of how scattered tribes of very early men developed some of the traits that made them human, or (b) a laughable caveman picture in which a lot of lantern-jawed actors jump around in animal skins, snarling and swinging clubs at one another. During the movie's opening scenes, I found myself seeing it in the second way, as a borderline comedy. But then these characters and their quest began to grow on me, and by the time the movie was over I cared very much about how their lives would turn out.

Other viewers report some of the same confusion. The movie has been compared with such varied works of art as “2001: A Space Odyssey” and “Alley Oop.” The question, I suppose, is whether you can make your own leap of imagination into the world of the movie--whether you're willing to identify with these beetle-browed ancestors who made more important discoveries, in their way, than all of the Nobel laureates put together. I found I wasn't willing, and I was a little surprised at how much affection the movie generated.

“Quest for Fire” was shot on rugged locations in Canada and Scotland and takes place at the dawn of man. It introduces us to a tribe of primitive men who guard their most precious possession, which is fire. They know how to tend it and how to use it, but not how to make it. And after a jealous tribe of less-advanced creatures attacks them and destroys their fire, three men set out on an odyssey to seek another tribe that possesses fire and to steal it from them. Along the way, there are terrifying adventures. A saber-toothed tiger chases the men up into a tree and keeps them there for days. On another occasion, the heroes are trapped between an unfriendly tribe of apes and a herd of mastodons. In each situation, the men realize that simply running away won't work; they can't run fast or far enough. And so they slowly and painfully figure out a solution to their dilemma. Climbing the tree, for example, is rather obvious, but their solution to the mastodon problem is a brave inspiration.

Eventually the men discover another tribe, a more advanced tribe that lives in primitive huts and knows how to make fire and has even developed arts (they decorate themselves with mud, and their clay pots have drawings of animals scratched on them). The leader of the wanderers lusts after one of the women of the new tribe, and after a strange initiation ceremony he has sex with her. Soon he will make one of his greatest discoveries: The difference between lust and love and how it leads to the difference between isolation--and loneliness.

“Quest for Fire” compresses prehistory quite radically, of course. It's a little much to expect that one man in one span of a few weeks could make the scientific, emotional, and tactical discoveries that take place in the movie. Our progress as a race must have been slower than that (although Loren Eiseley writes in his books of the amazing explosion of the size of the human brain in just a handful of generations). “Quest for Fire” isn't science, though, it's an imaginary re-creation of our past, and it uses history for inspiration, not as a data source. The only two technical advisers listed in the credits are, appropriately, a novelist and a scientific popularizer: Anthony Burgess created the special primitive languages in the film, and Desmond Morris choreographed the body language and gestures.

I suggested earlier that there's probably a temptation to laugh during “Quest for Fire,” especially during such touchy scenes as the one in which early woman teaches early man that it wasn't as good for her as it was for him. I smiled during those scenes. But, thinking over my response, I realize that I wasn't smiling at the movie, but at the behavior of the characters. Man is a comic beast. For all of our dignity, we are very simple in many of our wants and desires, and as we crawled out of the primeval sludge and started our long trek toward civilization, there must have been many more moments of comedy than of nobility.

“Quest for Fire” cheerfully acknowledges that, and indeed some of its best scenes involve man's discovery of laughter. When one of the primitive tribesmen is hit on the head by a small falling stone, the woman from the other tribe laughs and laughs. Our heroes are puzzled: They haven't heard such a noise before. But it strikes some sort of deep chord, I guess, because later, one of the tribesmen deliberately drops a small stone on his friend's head, and then everybody laughs: The three men together with the woman who taught them laughter. That's human. The guy who got hit on the head is, of course, a little slow to join in the laughter, but finally he goes along with the joke. That's civilization. 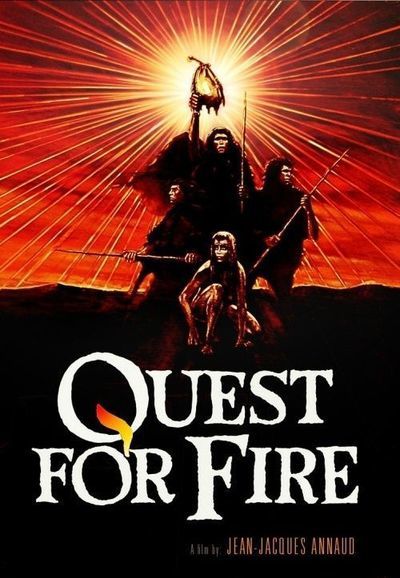