Queen of the Desert

Early in “Queen of the Desert,” Gertrude Bell’s father recounts a story to her about her first words spoken as a child that encompasses the entirety of her identity and disposition. Apparently, when her nanny tried to put her in a dress she pushed the woman away and proudly exclaimed “On my own!” Bell is quickly established as an impetuous, headstrong, and intelligent woman, disregarding social mores at every turn. That she’s a woman in the late 1800s, when the story begins, yearning to explore the world rather than be saddled with an ill-suited marriage makes her all the more remarkable. The film briefly flirts with the idea that maybe Bell was simply born in the wrong time. But has there ever been a time accepting women this fearsome, bright, and independent? Despite the rich biographical material of the real-life woman on which this is based and the skill of the filmmakers involved, “Queen of the Desert” ends up being an emotionally empty, thematically ill-defined, and listless affair. It is never able to communicate the complexity of the woman at its center.

The story begins in 1898 as Bell (played by Nicole Kidman) rankles her parents with desires of exploring the world and challenging herself intellectually instead of finding the appropriate suitor. She’s quickly shipped off to relatives in Tehran in the hope she’ll find some satisfaction. The narrative tracks her life and travels leading up to her collaboration with Winston Churchill (Christopher Fulford) in mapping the borders of Iraq, Jordan, and Saudi Arabia. This is the time of the Ottoman Empire’s last days as various nations become mired in World War I. International upheaval, as viewed from the intimate vantage point of a historical figure as enchanting and modern feeling as Bell, gives the filmmakers a variety of avenues to explore. But instead of hinging the emotional through-line on her ambition, proto-feminist leanings, or what made her so well-suited to navigating the tribal conflicts, the film focuses on the most prosaic aspect of this fascinating woman: her love life.

This is already a curious decision on its own. But that there is no blistering chemistry, no charm, no intensity in the romantic storylines makes matters worse. I’d rather further explore Bell’s inquisitiveness than watch Kidman try (and fail) to convince us that she’s in enamored with James Franco, who plays the first love interest Henry Cadogan. Franco is lost in the period trappings. Whenever he wasn’t onscreen I forgot he was in the film altogether. The dynamic he develops with Kidman is neither a convincing portrait of passion nor an evocation of two intellectual equals coming together. That this love story, which consumes much of the beginning of the film, is meant to be a crucial part of Bell’s characterization is laughable. This is the man that has her so undone after seeming so sure of her own independence? Bell’s more interesting romantic entanglement that bookends the film is with Charles Doughty-Wylie (an intriguing Damian Lewis), a married British Army officer. Bell also has a lovely (and blessedly platonic) rapport with colleague, T.E. Lawrence (Robert Pattinson). Both Lewis and Pattinson bring very different energies, leading their scenes to intermittently spark with a much-needed liveliness. It isn't quite enough, though. And while Kidman is dedicated to the role, this is one of her most pallid performances in recent memory.

On paper, this seems like the perfect role for Kidman, a typically resplendent and magnetic performer. Even in the worst films she’s committed to mining the trials of her characters to make a larger point about humanity. But even she can’t bring much gravitas to a film that seems to lack any cohesive thematic perspective. Writer/director Werner Herzog makes the fatal error of confusing loving his star and subject with understanding her. The lugubrious voiceover provides no deeper understanding of Bell. If anything, it makes her seem like even more of cipher. In forming such a reverential biopic the humanity of these characters and Herzog's own wildness are whittled away, leaving the mere husk of a more interesting story behind. Every obstacle Bell encounters melts too quickly in the face of her wit and intelligence. She’s a vision of perfection. At times, she’s lit in a way that her blonde hair radiates as if a halo making her seem even more angelic. But perfection isn’t interesting in a biopic such as this; it’s a death knell.

It’s clear Herzog is trying to craft “Queen of the Desert” within the lineage of the traditional star vehicle. From the epic “Gone with the Wind” to the intense “The Little Foxes,” classic Hollywood was able to create films that operated as lush, at times bombastic spectacles in order to showcase the strengths of their leading ladies. But instead of heightening Kidman’s qualities—her luminescence, chilliness, and finely wrought emotional intelligence—“Queen of the Desert” flattens these traits. It takes more than a sweeping score, beautiful cinematography, and drawn out narrative to make an engaging star vehicle. More than anything they require a strong personality and point of view from both director and star, which is regrettably in short supply here.

"Queen of the Desert" is so focused on Bell's romantic life that it fails to develop anything else about her. What pulls this woman to explore these different cultures and face-off with far more powerful men keen on underestimating her? At one point Bell says in voiceover, “For the first time in my life I know who I am.” By the end of the film I still didn’t. Instead I was left with questions. Why was Bell so drawn to her line of work? How did she reckon with being so blindingly ambitious in a time in which the exact opposite was encouraged in women of her stature? What drew her to specifically travel this part of the world? While the people around her cringingly toast to the British Empire with little care to the colonization that makes their wealth possible, Bell genuinely cares for the people she crosses in her travels through the Middle East. She garners their respect and admiration in turn for reasons the film never seeks to explore with much depth. The decision to focus on Bell’s romantic life as the core of the story could be more worthwhile if any characters had a psychological richness to them.

One of the biggest mistakes of “Queen of the Desert” is in not interrogating the nature of Bell’s ambition. Currently, women’s ambition is at a premium. It’s seen in the marketing of brands, the recently erected bronze “Fearless Girl” statue in Wall Street, and explored in recent works like "Big Little Lies." This gives Bell’s struggle between her own desires and social constraints a timely quality. Ambition, particularly for women, is a tricky attribute. It’s a trait shaped by class, race, and access. It can be both destructive and admirable. For Bell it comes across as both, given what’s sacrificed at the altar of her pursuit of intellectual and professional desires. It’s a worthwhile subject matter to explore. Unfortunately, it’s given only cursory interest in various one-liners about Bell’s independence or in the simplistically rendered showdowns she has with powerful men, as if that is enough.

“Queen of the Desert” demonstrates how staid a biopic can become when it forgets the icons at its center were also once human beings teeming with dreams, sins yearnings and contradictions. People are drawn to these kinds of stories not to see beautiful recreations of facts they can look up on Wikipedia but to take an intimate view on the human beings that made history. 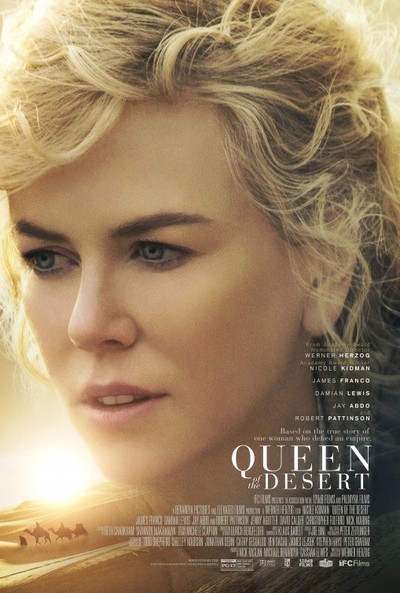 Rated PG-13 for brief nudity and some thematic elements.