The title credit of Melina Matsoukas’ debut feature, "Queen & Slim" is startling: gigantic yellow letters against a black background, with the enormity of the font establishing the gigantic scope of the film. There's something epic about it, like the names already mean something, have a resonance beyond the two humans they represent. The opening scene that follows is in direct opposition to the title credit: two unnamed characters sit in a diner, in the midst of an awkward Tinder date. There is a visible lack of chemistry. She (Jodie Turner-Smith) reached out to him (Daniel Kaluuya), because she had a bad day and didn't want to be alone. He prays before eating his meal, and she can barely contain an eyeroll. It's pretty clear this won't just be the first date, it'll also be the last. But events conspire against that normal and expected outcome. On the drive home, they're pulled over by a cop for a minor traffic violation. Things turn ugly, the cop is an aggressive and trigger-happy racist, but in the ensuing scuffle—it's the cop who ends up shot dead. Terrified, the couple decide to flee the scene.

They don't just flee the scene. They flee their lives as they once knew them. They toss their cell phones out the window. They drive, moving forward, always forward, attempting to get to Florida. They wonder if they can somehow make it to Cuba. There will be no going back. Meanwhile, the dash cam footage of the altercation with the cop goes viral, and the two become reluctant folk heroes. Wherever they go, people recognize them, help them, hide them: it's a modern-day Underground Railroad.

"Queen & Slim" is a road movie, more than it is anything else. Although one supporting character refers to them as "the black Bonnie and Clyde," the connection doesn't fit. Bonnie and Clyde, famously, robbed banks. They were criminals. But the characters in "Queen & Slim" are not criminals. They were minding their own business, and cooperating with the cop who pulled them over. You shouldn't be shot during a routine traffic stop. Their fleeing is, at first, an act of self-preservation. She is a defense attorney. She knows they won't get a fair shake.

Matsoukas is mostly known for her music videos, many of which are rightly famous (Beyoncé’s “Formation,” for one), and she establishes powerful atmospheres in "Queen & Slim", using real-life locations in interesting and often eye-catching ways. (Tat Radcliffe was the cinematographer). Lena Waithe's script was based on an idea given to her by James Frey, of all people, the author who disgraced himself with his fake memoir A Million Little Pieces. Frey gave her the premise, and she ran with it. Waithe and Matsoukas have collaborated together before, and there is a singularity of purpose at work in "Queen & Slim." Matsoukas juxtaposes disparate images to create destabilizing effects, mood swings, emotional shifts. Sometimes the juxtaposition feels intellectualized and abstract, and this strains the connections being made. There are some big "set piece" scenes which don't quite fit together.

But where Matsoukas' style and heart and palpable sense of purpose really works is in the quiet moments, the still moments, the moments where "Queen & Slim" is allowed to breathe. At 132 minutes, there's a lot of room to breathe, and it's a wonderful experience watching a film where the characters are given so much space. Matsoukas does not feel rushed, she does not feel like she needs to hurry them along from place to place. The film lingers in its scenes. This might be the most radical thing about "Queen & Slim," its willingness to linger in the quiet in-between moments. There are very stressful sequences, but then there are other sequences, like the two of them stopping to look at horses in a field, or dancing in a backwoods blues club, finally relaxed enough to enjoy each other.

Daniel Kaluuya, who gave a performance for the ages in his Oscar-nominated turn in "Get Out," does what he can with a character who isn't really "on the page," and his sense of emotional truth and honesty carries him through. He doesn't ever push. He's alive in the moment. He's also wonderful with newcomer Turner-Smith, whose inexperience sometimes shows, but he's there for her, supporting her, listening to her. This isn't really an epic love affair, it's more like a marriage of convenience which then shifts into deeper waters almost by stealth. When she dances with him in the blues club, when he finally forces her to crack a smile, the entire film sparks to life.

"Queen & Slim" works in archetypes. Even the title is archetypal. Neither nickname is ever heard or used in the film. We don't learn the characters' names until almost the end. We're in mythic territory here, the "big mood" of the title credit. Slim has a father he wants to call, but other than that, we don't know anything about him. His license plate says "TrustGod," but that's about it in terms of character development. We don't learn her backstory until late in the film. All of this works in favor of the archetypal structure. Archetypes are used for a reason: archetypes are symbols, not individualized characters, archetypes represent the hopes, dreams, fears, hatreds, of a community. They're more like projector screens than people. When used correctly—as they are here—archetypes contain tremendous emotional power.

This may seem like a strange reference, but the British poet Edith Sitwell, known for her grandiose performance-art-piece readings of her own poetry, wrote in her autobiography that she wanted a "return to rhetoric" in poetry, that she rejected "the outcry for understatement, for quietness, for neutral tints in poetry." I thought of this watching Queen & Slim. "Queen & Slim" is not interested in "neutral tints" either. Or "understatement." I appreciated the "big mood" of it all, even in those sequences that don't quite work. I responded strongly to the film's sense of scope and scale. The "rhetoric" of "Queen & Slim" reverberates with anger and love and mourning. 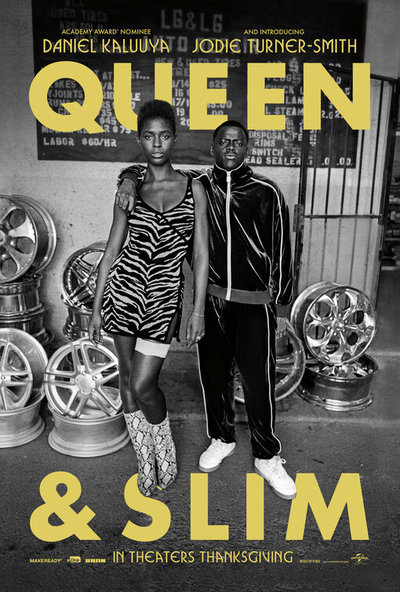