A few days after “Q” was screened at the Cannes Film Festival (under its original title, “The Winged Serpent”), the following conversation took place between Samuel Z. Arkoff, the film's producer, and Rex Reed, the critic:

Reed: Sam! I just saw “The Winged Serpent”! What a surprise! All that dreck--and right in the middle of it, a great Method performance by Michael Moriarty!

Arkoff: The dreck was my idea.

I believe him. Arkoff has been producing films for thirty years now, and even if he was honored with a retrospective at the Museum of Modern Art, his heart still lies with shots of a giant flying lizard attacking a woman in a bikini on top of a Manhattan skyscraper. He's just that kinda guy. There are, in fact, several shots in “Q” that owe their ancestry to Sam Arkoff. I am aware, of course, that Larry Cohen gets credit for having written and directed this movie, but where would Cohen or any other director be without the rich heritage of a quarter-century of American-International Pictures made by Sam Arkoff? Here are examples of the shots I have in mind:

· The camera looks straight down at terrified citizens fleeing from a menace. They run crazily across the street. Some run away from the camera, some toward it, so that you can't tell for sure where the menace is, and the shot can be intercut with shots of a menace approaching from any direction.
· The hero empties his machine gun into the giant serpent and turns away from a window to issue orders: "Everybody hold your positions!" Just then the serpent reappears behind him.
· There are False Serpent Alarms in which people get hit from behind by toy birds, chairs, and their boyfriends.
· David Carradine says, "He doesn't die easy." You get the idea. “Q” is another silly monster movie. But think how long it's been since we had another silly monster movie. There was a time during the golden age of Sam Arkoff's career when there were lots of monster movies. Remember, for example, “Attack of the Crab Monsters”, “Viking Women and the Sea Serpent”, “Creature from the Haunted Sea”, and “The Wasp Woman”. But in the last few years Creature Features have been replaced by Dead Teenager Movies, and instead of awful special effects of a monster going berserk, we get worse shots of a homicidal maniac going berserk.

“Q” returns to the basic formula, in which a prehistoric creature terrorizes the city. In this case, the creature is a Quetzalcoatl, a mythical Aztec monster with wings and four claws. It apparently has been brought back into existence in connection with some shady human sacrifices at the Museum of Natural History (although this particular subplot is very muddled). It lives in a nest at the top of the Chrysler Building, lays eggs, and terrorizes helpless New Yorkers, who are not sure if this is a real monster or another crazy circulation stunt by Rupert Murdoch.

Rex Reed was right, though, about the Method performance by Michael Moriarty. In the middle of this exploitation movie, there's Moriarty, rolling his eyes, improvising dialogue, and acting creepy. He's fun to watch, especially in the scene where he names his terms for leading the cops to the lizard. The cast also includes David Carradine, Richard Roundtree, and Candy Clark, good actors all, but you have to be awfully good not to be upstaged by the death throes of a dying Quetzalcoatl.

Still to be answered: How did one Quetzalcoatl get pregnant? 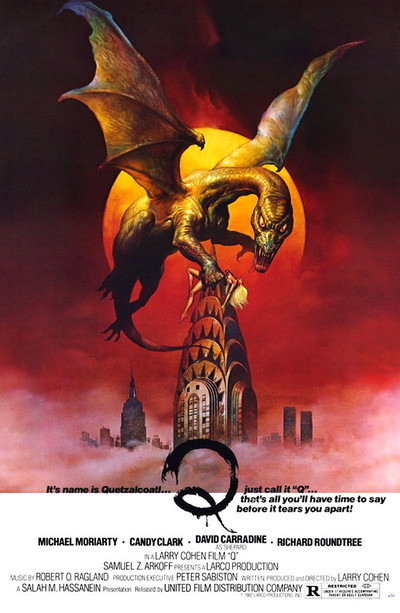