While it has a couple of appreciably goofy flourishes, the proudly crass horror-comedy "Puppet Master: The Littlest Reich" is sadly more boring than offensive despite its superficially controversial high-concept premise: what if sentient Nazi puppets started killing everybody they deemed to be inferior? It's not even a novel affront since the Puppet Master film franchise—which has inspired a dozen follow-ups since it began in 1989—has been exploiting Nazi imagery since "Puppet Master III: Toulon's Revenge" back in 1991. Lately, the series has gone all in on such low-hanging humor, including Nazi-themed sequels in 2010, 2012, and 2017.

The most interesting aspect of "The Littlest Reich"—which is a series reboot of sorts—is that it's scripted by S. Craig Zahler, the writer/director/songwriter behind bloody, but soulful genre hybrids "Bone Tomahawk" and "Brawl in Cell Block 99." "The Littlest Reich" features brief flashes of Zahler's flinty wit and machismo, but it also often feels like a bizarrely misconceived side project. One by one, disposable supporting characters—several of whom are attacked simply because they are gay, Jewish, or black—die ostensibly comical deaths. The only people who can stop their pint-sized murderers—who descend on a hotel full of unsuspecting guests in Pottsville, Texas—are sad sack comic book artist Edgar (Thomas Lennon), his obnoxious BFF Markowitz (Nelson Franklin), and his literal girl next door love interest Ashley (Jenny Pellicer). Unfortunately, none of these characters are well-developed beyond an isolated scene or two, like when Edgar is confronted by his uptight/suspicious dad Tom (James Easton) after he moves in with his parents following a messy divorce.

The rest of the film's non-puppet-related scenes are dominated by Markowitz, whose persistent need to mock Edgar and his girlfriend is pretty monotonous and predictable. Markowitz is what you'd get if you half-heartedly tried to make "South Park" brat Eric Cartman simultaneously repellent and likable. First he jokingly asks Ashley to take her top off, then he tries to banter with bartender Cuddly Bear (Skeeta Jenkins), a stereotypically sassy black supporting character who talks in the third-person and understandably looks askance at Markowitz after he tries to hit on and then (again, jokingly) asks Cuddly Bear to poison a fellow bar patron who he describes as a "bookish blonde" (Alison Viktorin). Markowitz's pseudo-playful banter with Cuddly Bear suggests that he's self-aware enough to know that he's a nuisance, but also ostensibly sympathetic enough to be laughed off as a harmless sex pest.

Still, you might wonder why Markowitz is the most developed character in "Puppet Master: The Littlest Reich" given that Edgar is constantly presented as the film's lead protagonist. You also might find some answers in the scene where Markowitz, upon checking into his hotel, is confronted by a smirking, passive-aggressive comment from the concierge: "You must be Markowitz," the unnamed hotel employee says. Markowitz scoffs and asks if that remark was made because he looks Jewish. The concierge shrugs and says, "Well, are you Markowitz?" Markowitz sheepishly admits that he is, and the concierge moves on, his dickish point seemingly having been proven. Because apparently you're only telling it like it is if you casually point out that a Jewish stranger appears to be Jewish.

This brief encounter says a lot about the unfunny Nazi-related humor that follows, moreso than a later scene where yarmulke-wearing Jewish-American hotel guest Jason (Stephen Brodie) explains to his wife Rachel (Mary Katherine O'Donnell) that he collects Nazi puppets because he, like many Jews, wants to assert control over these hateful symbols.

Sounds great, but many scenes involving Nazi Puppets in "Puppet Master: The Littlest Reich" are so gutless in their button-pushing humor that one can't help but think that the hotel concierge's insensitivity is telling. Kill scenes, like when a Nazi puppet worms its way into and then out of a pregnant black woman's womb, are proudly juvenile, but never really funny.

There aren't too many of these “hate crime” murders (as one character puts it), but there are enough to make you wish that other, comparatively inoffensive puppet attack scenes were at least appreciably gruesome or silly. One guest is murdered after he lies to his mother about his alcoholism. Another, a lesbian, is beheaded shortly after she briefly talks to her partner about having a child. And some characters die just because they’re trying to run away, as one hotel guest huffily points out. That defensive correction suggests that the film’s creators want to have the right to push viewers' buttons, but are too scared to forcefully mock “social justice warrior” killjoys.

There are fun supporting performances/cameos by characters actors Michael Paré, Barbara Crampton, and Udo Kier, but even they can't prop up such a lazy provocation. Tasteless jokes are one thing, but if your whole bit amounts to Ricky Gervais/Andrew Dice Clay-style button-pushing, you better be ready to commit to that bit. "Puppet Master: The Littlest Reich" is only sometimes desperate-to-peeve, leaving one to wonder what Zahler saw in the project in the first place. 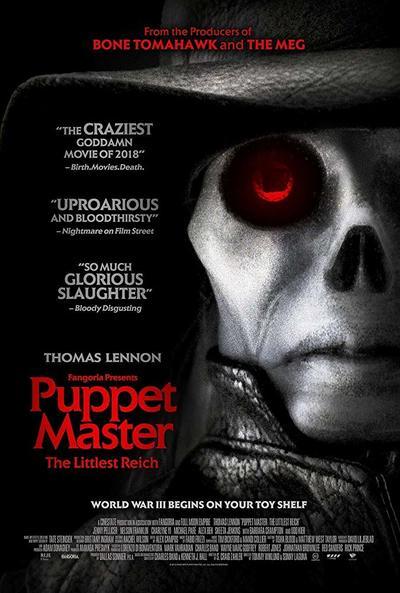