It’s only fitting that the opening moments of Eric Barbier’s “Promise at Dawn” are awash in Mexico’s annual Day of the Dead festivities, since the lingering presence of the deceased plays a crucial role in the picture, often in ways that aren’t immediately obvious. Snaking her way through the decorated crowd is Vogue editor Lesley Blanch (Catherine McCormack), hurrying to the aid of her husband, the famed novelist Romain Gary (Pierre Niney). Though he’s convinced that he will soon die of a brain tumor, Blanch’s unruffled demeanor suggests otherwise. As they journey on a five-hour cab ride to a hospital in Mexico City, Blanch reads the new manuscript of her husband’s titular memoir, which he dubs a testament.

It is, in essence, Gary’s literary attempt to resurrect his late mother, Nina Kacew (Charlotte Gainsbourg), the woman whose dreams he lived each day to fulfill. She had made it clear to him from childhood onward that she gave up a promising acting career to raise him as a single mother, and wouldn’t be satisfied if his life turned out to be anything less than legendary. Though Nina later admitted to him that she wasn’t as great a performer as she may have led him to believe, her ability to improvise while tapping into her restless imagination not only kept her employed but extended her life span in ways that transcended the normal boundaries of mortality.

Gary’s novel, published in 1960, was adapted for film once before in 1970 by Jules Dassin as a star vehicle for Greek Oscar nominee Melina Mercouri, whose charisma dominated the picture in ways that, according to Roger Ebert, were both beguiling and problematic. Gainsbourg is one of the most fearless actors of her generation, requiring no gauzy filters or archetypical heroines in order to captivate viewers. She brings a fierce and occasionally frightening zeal to the role of Nina while illuminating how the love she showers upon her son can be simultaneously selfless and narcissistic. Yet the script coauthored by Barbier and Marie Eynard wisely places Gary—as identified by his birth name, Roman Kacew—at the forefront of its narrative, exploring the inherent tragedy of his tireless devotion to a mother unwilling to treat him as a son.

She instructs him on being a ladykiller capable of breaking women’s hearts, but feels betrayed upon finding him in bed with their smitten maid (Lou Chauvain). We see Roman as a child (Pawel Puchalski) joining his mother at the cinema, where they ogle Tsarist matinee idol Ivan Mosjourkine (a man rumored to be the author’s biological father), an embodiment of the formidable masculinity Nina hopes her son will replicate (“I shuddered at my mother’s expectations of me,” Roman recalls in voice-over). His desire to be the man in Nina’s life rather than her offspring led him to realize that no romantic partner could ever be granted the love he reserved for his mother, even long after her death.

What’s a little surprising, in light of the subject matter’s considerable weight, is how funny the film frequently proves to be, often as a result of the absurdity that characterizes Nina’s expectations. In an inspired touch, the pint-sized Roman is juxtaposed next to Ivan in the black-and-white footage that flickers on the theater screen, mimicking the star’s manly stare that he later uses on his first crush, an eight-year-old more interested in having her potential beaus prove their adoration by eating mud and snails. When he returns home a filthy mess, Nina’s agitation morphs into delight upon realizing that her son’s brawl with fellow peers was fueled by lust, thus aligning with her belief that such fighting is noble when done in the name of “women, honor or France.”

This principle leads him to reluctantly defend his honor by picking a fight with a Polish ally simply because the man chose to dance with a woman who had been flirting all night with Roman, resulting in a comically staged duel. Roman’s utter lack of interest in the incessantly gabby female admirer is beside the point. In order to soften the blow that he was the only French Air Force cadet in his class who failed to be commissioned as an officer, apparently due to his Jewish heritage, Roman fibs to Nina that it was his punishment for seducing the wife of his superior. Naturally, his mother is overjoyed, boasting to the townspeople she’s assembled for her son’s homecoming that Roman was singled out from a crowd of 300, which for her is distinction enough.

In many ways, Niney is the film’s standout, as he undergoes a remarkable transformation from a gangly young man to a weathered war hero over the course of a story spanning multiple decades. He earns the film’s biggest laugh when Roman, driven mad by mosquitos while stationed in Africa, tries killing one of the blood-sucking insects with his gun, perhaps the funniest attempt at fly-swatting since Vegas showgirl Candie clocked a guy with a TV remote in “Twin Peaks: The Return.” He’s also quite moving when his love for Nina inspires him to perform good deeds, whether it’s standing up to a chain-smoking doctor or rescuing an elderly woman whose eyes reflect the loneliness of his mother, left at home and bedridden with diabetes as WWII rages outside.

There’s a nail-biting sequence where he must guide a blinded pilot in landing their plane, recalling the tensest set-pieces in 1962’s epic, “The Longest Day,” co-written by Roman. As rousing as these individual moments may be, the film doesn’t succumb to sentimentality, refusing to turn a blind eye on Nina’s abusive nature. Finding that Roman ran from bullies who branded her a “whore,” she beats him herself, saying that if anyone dares disrespect her to his face, she wants him to arrive back home in a stretcher. With her health deteriorating and her son planning to break free, it’s clear that Nina is in need of a caregiver, yet she coldly rejects the overtures of a kindly painter, in part because she believes his profession breeds suicidal tendencies.

With a running time clocking in just over two hours, “Promise at Dawn” often plays like a truncated miniseries, with scenes moving along too quickly for their emotional peaks and valleys to reach their fullest expression. The relentless momentum of the film’s pacing does, however, have a poignant cumulative impact, reflecting how Roman’s coming-of-age was a literal race against time to ensure his status as a French literary genius was solidified prior to Nina’s encroaching demise. Whether any of his hard-earned achievements sprang from his own passion remains ambiguous, since his early interest in painting was promptly shut down by Nina, fearing it would be his death sentence.

On many occasions during the war, Nina’s interference literally saved her son’s life, but to what end? Her apparition materializes in the shadows of his darkest days, refusing to let him fade away as he lies in a hospital, stricken with Typhoid. Bombing targets by day, writing furiously by night, Roman has no chance to pause long enough to ponder the meaning of his mother’s consistent stream of reassuring yet oddly detached letters until the war’s end, and when the reality sinks in, it stings. Roman became as successful and revered as his mother had hoped, but does that matter if it left him unfulfilled? The fact he took his own life at age 66 causes this film, however moving it may be, to end on an especially ironic note. 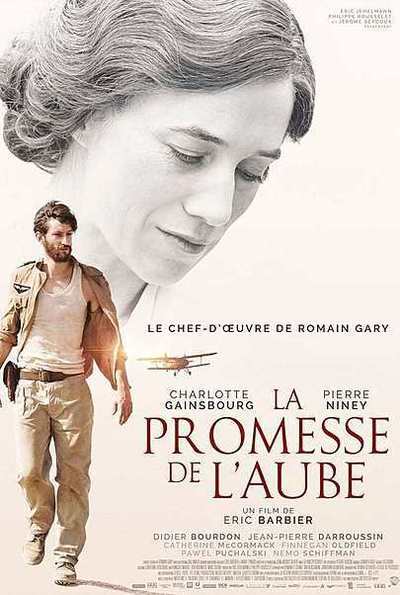