The very good, very British, and somewhat proper 1947 movie “Dead of Night” notwithstanding, the horror anthology movie has never had the trappings of respectability about it, and in a sense that’s all for the good. Inventive but down-and-dirty groupings such as “Tales from the Crypt” and “Asylum,” full of twisted tales and lurid shocks (the former was indeed inspired by the notorious EC picture book of the same name, the sort of thing that eventually gave us the Comics Code) were a vital part of my own cinematic, um, nourishment as a tween cinephile.

Often the unifying hooks of those pictures were a big part of the fun. Ralph Richardson’s original Crypt Keeper, balking at his charges’ protest that they couldn’t stick around to hear morbid tales because they had other plans. “Plans?” he replied with memorable sharpness. Herbert Lom’s sweaty doctor bringing to a head the “one wacky hospital” thread in “Asylum,” Peter Cushing’s antiques dealer with a unique was of dealing with cheats and thieves in ‘From Beyond the Grave.” Varying degrees of cleverness have manifested themselves in self-explanatory recent concepts such as “VHS” and “The ABCs of Death.” “Portals,” a multi-narrative, multi-director picture, has a good hook: a unifying narrative about the aftermath of a collider project that results in the creation of a black hole, on earth.

Its immediate effects are worldwide blackouts, and the appearance worldwide of cosmic portals—miniature black holes, perhaps—that use varying methods of persuasion to invite human beings inside. The portals themselves look like shrunken iterations of the monolith in “2001,” with some geometric adjustments. Also the surfaces aren’t matte black but kind of reflective, and have built-in lighting effects that resemble those of a high-end, Vegas-like even, haunted house show. Derivative, yes, but they get the job of unnerving you done. In part due to the noises that accompany them, unholy mixes of fax-machine beeps and glitchy digital feedback.

The stories involve two of the scientists responsible for the mess, a family fleeing its house and encountering a portal in the middle of a highway, two sisters in Indonesia arguing in an underground parking lot, and an increasingly panic-stricken emergency call center.

“Portals” is something of a bait-and-switch. While the concept suggests mind-bending alternate-reality stuff, the not terribly cerebral reality of the movie offers more in the line of eyeball-gouging, blood-spurting, face-melting shock horror. There are even cosmic—well I think they’re cosmic—zombies in the Indonesia sequence. Any quantum physics wackiness is reserved for twist endings. But even these are more in the tradition of “The Monkey’s Paw” than “A Brief History of Time.”

That said, with the exception of the call center sequence, which homes in on a shouty guy with a powerful revolver, which is unfortunately something you do see everyday somehow in real life, the tales are imaginative and/or grotesque enough to maintain genuine interest. And the whole thing moves with a commendable briskness. The movie is a co-production of the website Bloody Disgusting, which is also behind the “VHS” anthologies, and the outfit has a better than general grasp of What Horror Fans Want. I wish “Portals” was better, but I also have to acknowledge it as un vrai horror film. 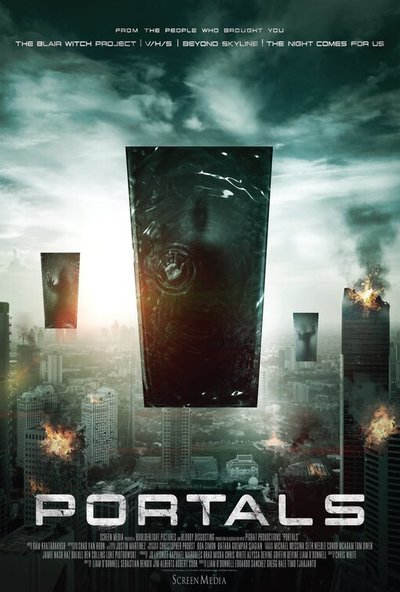 Clint Jung as The Chief