"Pootie Tang" is not bad so much as inexplicable. You watch in puzzlement: How did this train wreck happen? How was this movie assembled out of such ill-fitting pieces? Who thought it was funny? Who thought it was finished? For that matter, was it finished? Take away the endless opening titles and end credits, and it's about 70 minutes long. The press notes say it comes "from the comedy laboratory of HBO's Emmy Award-winning `Chris Rock Show.' " It's like one of those lab experiments where the room smells like swamp gas and all the mice are dead.

Lance Crouther stars as Pootie Tang, a folk hero who has gained enormous popularity, even though nobody can understand a word he says. He crusades against the evil Lecter Corp., which sells cigarettes, booze, drugs and fast food to kids. Pootie is a regular character on "The Chris Rock Show" and has a following, but he's more suited to skits than to a feature film--or at least to this feature film, which is disorganized, senseless and chaotic.

Characters appear and disappear without pattern. Pootie has funny scenes, as when he dodges bullets, and other scenes, as when a woman eats a pie off his face, that seem left in the movie by accident. His secret weapon is his daddy's belt, which he uses against criminals. His daddy (Chris Rock) gave it to him on his deathbed, after being mauled by a gorilla at the steel mill. When the belt is stolen by an evil woman named Ireenie (Jennifer Coolidge), he loses his powers, but is helped by a good woman named Biggie Shorty (Wanda Sykes, who provides more personality than the movie deserves).

Biggie Shorty is a hooker but spends most of her time boogying on street corners and encouraging Pootie Tang. She has a farm in Mississippi she lends Pootie, who during his recuperation there is encouraged by the white sheriff to date his daughter. This leads in the direction of a shotgun marriage, until the story thread evaporates, and Pootie ends up in bed with Biggie. There is another villain named Dirty Dee (Reg E. Cathey) who is very dirty, and a villain, Dick Lecter, played by Robert Vaughn as if he may have a touch of lockjaw. Bob Costas plays an interviewer in one of those dreadful assignments where the writers thought it was funny simply that he was in the movie, instead of giving him anything funny to do.

Material this silly might at least be mindless entertainment for children, but "Pootie Tang" for no good reason includes a lot of language it has no need for. The studios put enormous pressure on the MPAA to award PG-13 ratings to what once would have been R-rated material, and the MPAA obliges. Here is dialogue your MPAA rates PG-13: "You can't hurt a 'ho with a belt. They like it." Women are routinely described as bitches and slapped around a lot (so are men). I have no problem with street language in movies with a use for the language. But why use it gratuitously in a movie that has no need for it, with a lead character whose TV exposure will attract younger viewers? What's the point? Anyway, I'm not so much indignant as confused. Audiences will come out scratching their heads. The movie is half-baked, a shabby job of work. There are flashes of good stuff: a music video in the closing titles, some good songs on the soundtrack, Lance Crouther heroically making Pootie Tang an intriguing character, even though the movie gives him no help. This movie is not in a releasable condition. 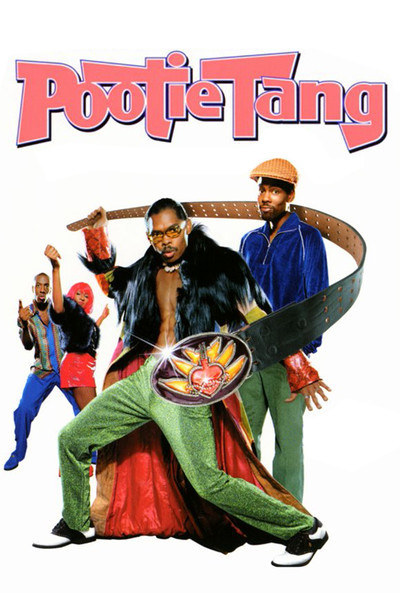