Joe Lynch’s “Point Blank” starts with enough propulsive energy that you strap in, ready for an action movie thrill ride. Two great character actors, a fun premise, a director who knows how to execute tight action sequences--sign me up. And the first half of “Point Blank” moves and hums. And then it stops moving. A movie that needs to fly from first frame to last slows down, loses its momentum, and never recovers, limping across the finish line with a climax that doesn’t work.

Fred Cavaye’s 2010 French action film of the same name was such an international hit that it’s already been remade around the world, including a South Korean version called “The Target” and a Bangla remake titled “Password.” It’s the beautiful simplicity of the set-up that has attracted producers and filmmakers around the world. Good guy + bad guy + pregnant woman. And it all takes place on one crazy night.

The new “Point Blank” opens with the “bad guy” falling out a window and fleeing a crime scene. As Abe (Frank Grillo) runs with a flash drive in his hand, his brother Mateo (Christian Cooke) speeds to the scene to pick him up. The two make eye contact just before Abe is hit by another car, and the authorities descend on the scene. Mateo is forced to drive away and Abe is taken to the hospital, first presumed to just be a victim of a crazy car accident.

Abe’s nurse ends up being the kindly Paul (Anthony Mackie), whose wife Taryn (Teyonah Parris) is very pregnant. As the authorities (including Marcia Gay Harden and Boris McGiver) investigate the crime from which Abe fled, Paul’s life crumbles around him. Mateo decides that the best way to get his brother back is to force someone on the inside to do the dirty work for him. And so he kidnaps Taryn, ordering Paul to get Abe past the guards at the hospital and back into his brother’s arms. Easier said than done, right?

It’s a wonderfully simple concept that incorporates so many old-fashioned action movie elements. We have the “unexpected hero” in Paul, who will clearly learn that he’s a lot tougher under pressure when it looks like his wife and child may die. We have the “bad guy who’s not really that bad” in Abe, who becomes an ally of Paul’s as much as an enemy when what really happened before that window fall becomes clearer. We have a ticking clock, especially when Taryn goes into labor.

All of these action elements work to Lynch’s strengths. He’s a director who has proven he knows how to handle lean and mean action in the past, and one can feel Joe Carnahan’s gritty, macho energy here too as the “Narc” director is a producer. These men know how to make dirty, no-fat action movies. And they do. For about 45 minutes.

The problem with “Point Blank” is that it starts to prey on unearned emotion. A few twists and turns that will go unspoiled rely on our caring about these characters in ways that the first half of the film hasn’t really developed or earned. And then the climax tries to build on that thin veneer of emotion in a way that will make you realize you don’t really care at all about what happens to these people. Sure, there’s inherent energy in the image of a nine-months-pregnant woman with a gun to her stomach, but that’s cheap. And I’m not saying that a movie like “Point Blank” needs to have three-dimensional, emotionally resonant characters, but a film like this can’t have it both ways. It can’t be built on action movie archetypes and then ask us to care about those archetypes in order for the lackluster, poorly staged climax to work. The final ten minutes of “Point Blank” are shockingly ineffective, poorly paced in such a way that I wondered if they weren’t just stretching out the action to get to the film’s very short running time (credits roll around the 80-minute mark). No one wants to think a movie like this is just killing time. 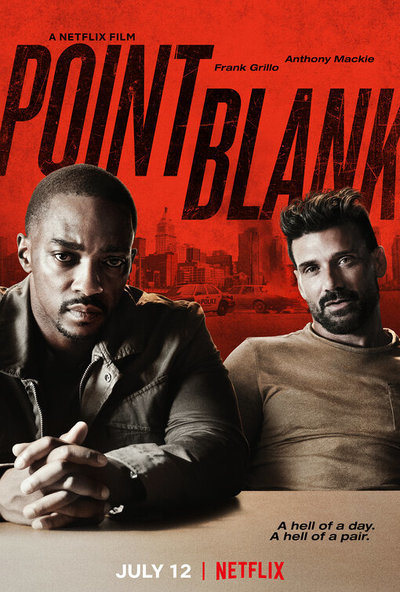