What happened to Catherine Hardwicke?

With every new film she chooses to direct, she drifts farther away from the early ones that put her on the map: her 2003 debut, the teen drama "thirteen," and her 2005 skateboarding adventure "Lords of Dogtown." These were stripped-down films with a immediacy, relatable emotions and a vivid sense of place. Then came 2006's "The Nativity Story," which seemed to have been made by an entirely different person; it was so overly earnest, it felt like it belonged on the Hallmark Channel, and in retrospect is a blip.

The first "Twilight" movie from 2008 was a good fit for her outrageous sense of style and her knack for depicting the angst of youth. It also opened at nearly $70 million, the biggest debut for a female director—which, in theory, should have opened countless doors and allowed Hardwicke to make any sort of film she wanted. And so she made the soapy, chintzy "Red Riding Hood" (2011), which suggested what it might look like if the "Twilight" kids got dressed up and went to the Renaissance Faire.

Her latest film is the clunky "Plush," a psychological thriller set in the Los Angeles rock scene. It feels so inauthentic at every turn, it's as if the film itself is unsure of what it's supposed to be. Camp? Not camp? A cautionary tale? A rock 'n' roll fable? A tragic example of obsession? Or maybe just an excuse to wallow in debauchery? It does feature some of he most lifeless and unconvincing concert scenes I've ever seen; meanwhile, the backstage moments consist of nonstop smoking and champagne swilling, shorthand for danger and self-destruction.

Heavy narration over a long opening flashback is meant to fill in some of the emotional gaps, but it's just one of many examples of the film spelling out everything. Hayley (Emily Browning in Goth-chick mode) explains in detail how she and her beloved brother, Jack (Thomas Dekker), grew up in Texas writing and singing their own songs. "Music was like our secret place," she says in girlish, wistful tones. "Nothing could hurt us because Jack and I had each other."

In no time, they've moved to Los Angeles and formed a band called Plush. At 19, she's pregnant with twin boys and marrying a hunky journalist named Carter, played by Cam Gigandet. ("Carter's daughter, Lila, was our flower girl," Hayley explains in one of the more awkward pieces of voiceover in the script from Hardwicke and Arty Nelson. "She lives with her mom half the time.")

Plush is a smash, which inspires all the creepy fan worship and drug abuse you might expect. Then one night after a concert, Jack overdoses on heroin, sending Hayley reeling. She records a new album in his honor with painfully literal lyrics like: "Half of me is gone." Audiences and critics reject it, sending her into a further spiral.

She thinks she's found her savior in the band's new guitarist, Enzo (Xavier Samuel, who recently played Naomi Watts' surfing son in the mom-swapping drama "Adore"). Not only does he know all her old songs, he inspires her to push through her own limits in writing new ones. Unfortunately, Enzo may also be bisexual, and a stalker. That's not a spoiler, by the way: the tattoo right above Enzo's butt crack of both Hayley and Jack's pictures gives his orientation away, and the stalker part is telegraphed as well.

From here, "Plush" follows the eye-linered Enzo's efforts to insinuate himself in Hayley's life while Hayley remains oblivious to just how deranged he truly is.  The presence of an odd and officious new nanny for the family (Frances Fisher, in a sweeping up-do and a cape) is no coincidence; she's exactly who you think she is. Meanwhile, increasingly threatening gifts keep showing up from a demanding fan. Who could possibly be sending them???

All of this should have been more darkly funny, more knowingly campy, something. As it is, "Plush" awkwardly tries to shock and frighten us while also trying to tease and amuse us.

Browning has come a long way from playing the innocent girl in "Lemony Snicket's A Series of Unfortunate Events," as evidenced by her starring role in Zack Snyder's fetishistic extravaganza "Sucker Punch," and by "Sleeping Beauty," in which she's naked pretty much the entire time. She's up for any challenge, and has the striking, clear-eyed look of a doll come to life, but this was one risky role that didn't pay off.

At one point toward the end of "Plush," as tensions are mounting and Carter is taking out his jealousy by doing manly yard work, Enzo shoots a video for Hayley's new single. Filled with bondage imagery and disturbing, sepia-toned jump cuts, it's a straight-up rip-off of the famous Mark Romanek clip for the Nine Inch Nails hit "Closer." But it also might just be the best part of the film. 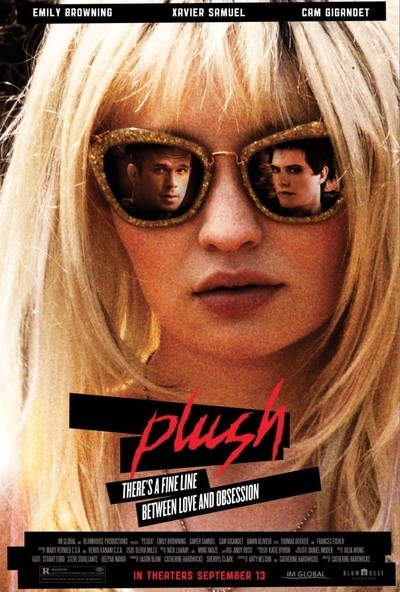