Through the teary eyes of a child, fighting against her first day of school, writer/director Laura Wandel introduces us into the microcosm of her heart-rending debut “Playground,” Belgium’s shortlisted Oscar entry for Best International Feature Film.

Cinema has seen many an exploration on the subject of bullying, but seldom like this. Wandel's observational effort is distinguished by the immediacy of its images, containing performances that are jaw-dropping in their realism. It’s almost impossible to fathom “Playground” is not a non-fiction work documenting the interactions of grade school children similar to what the French documentary “To Be and To Have” did 20 years ago.

Indeed, it feels appropriate that the film’s original French title, “Un munde,” translates to “A world,” since that’s precisely what Wandel opens, a passage back to a life stage many of us may have relegated to the bottom of our memories. As if being shrunk and placed back into one’s elementary days, the camera stays at the height of the kids. Adults only come inside the frame as torsos and legs unless they stoop down to the students’ eye level.

Our perspective matches that of shy Nora (Maya Vanderbeque), a seven-year-old struggling to acclimate to her new environment of extreme sensorial stimulation and over-socializing. As she slowly tries to make friends, she notices her brother Abel (Günter Duret), a few grades above her, suffer violent harassment from older boys. He doesn’t defend himself, nor does he want to inform their father of the ongoing, severely dangerous, mistreatment.

Wandel portrays the cruelty people are capable of even at this tender age with an unsparing visual frankness. Still, the most profound sorrow doesn’t come from the abuse itself, but in how Abel’s inaction towards it and his eventual transition into becoming the victimizer redefines siblings’ dynamic. Shame and frustration fill a sea between them.

Nora’s strong sense of justice, still righteous given her inexperience with the unfairness of existence, prevents her from comprehending Abel’s desperation to fit, to not give into what would be perceived a weakness. But she, evidently, isn’t immune to that desire to belong, and when an invitation to a classmate’s birthday party is maliciously revoked, her reaction paints this event as a tragedy. In the context of what matters to her, it most certainly is.

While both Duret and Vanderbeque’s acting is—without fear of hyperbole—miraculous, the latter’s presence on screen speaks of an innate sensitivity for externalizing a person’s inner complications. How Wandel managed to encourage and shape such a turn must be sheer alchemy. Working almost exclusively in tight close-ups, cinematographer Frédéric Noirhomme immortalizes the unspoken: her look of disappointment, a gesture of hurtful indifference, proving that the age of innocence isn’t without darkness.

“Playground” never leaves the educational institution. No scenes take place at the young protagonists’ home or at the park. Their entire universe, as we see it, begins and ends at the school’s gate. At times the spaces evokes the rules and tropes associated with a prison, where there’s a yard with cliques and a specific code of ethics to abide by in order to survive. The negative psychological implications of their time there is amplified with confining compositions and vigorous camera movement.

To widen the reach of her film’s themes, Wandel adds another layer of insecurity related to the influence of others in how we understand where we fit into society. Nora questions her father about having free time to drop and pick them up from school every day. She questions why he doesn’t spend his days working like other fathers, because having a distinct household experience, being different, prompts alienation.

When we are young, we are impressionable and emotionally malleable before we fully realize the many perils of living. When we reminisce about childhood we might do so with a lens of wonderment. But, in the moment, the pain can seem overwhelming. Fashioned out of fresh faces unable to lie to the camera, “Playground” is a study in human behavior wrapped in equal parts fear and curiosity. With a brilliant new director chaperoning its drama and aware of how every audiovisual element contributes to its power, the film, intimate in scope but grand in its revelations, immerses us in Nora’s crusade to make sense of it all. That this is Wandel’s first feature boggles the mind. 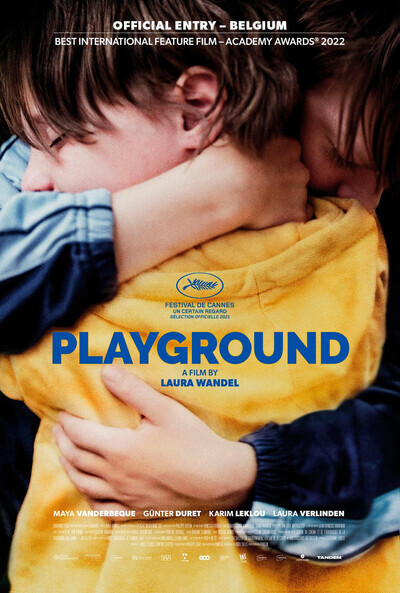