There is a moment in “Plan A,” based on the true story of a revenge plot by German Jews following WWII, when two exhausted, deeply traumatized people, devastated by the loss of friends, family, homes, and a belief in a world that makes sense, take a moment to do something normal. They go to a movie, their first time in a theater since before the war. An American newsreel shows crowds cheering the returning soldiers in New York. A world where people are filled with joy and hope at the end of the war is incomprehensible to the people who see nothing around them but unthinkable horror. And then the newsreel turns to footage of the newly uncovered atrocities in the concentration camps. The survivors are looking at images they know only too well, as they hear new details still being uncovered.

“What if I told you that your family was murdered?” we are asked at the beginning of the film. What would give you a sense of justice? Or of satisfaction? Or just of something more than powerlessness? Those issues are explored with some nuance in this somber, dark drama.

The character in the heart of the story is fictional. His name is Max, played by August Diehl. It is through his sunken, haunted eyes that we see the different ways the devastated survivors think about what to do next. Some leave for what was then British-controlled Palestine, with the hope of creating what would become Israel. Others stay behind, trying to extract vengeance.

Max tries to return to his home, looking for his wife and son. He asks the man who is living there how we could have betrayed Max’s family. “This house is mine now,” Max’s one-time neighbor says, pointing his gun. “Just because the war is over does not mean we can’t kill Jews anymore.”

Max meets up with members of the sympathetic British Jewish Infantry Brigade Group, who are working to relocate survivors to Palestine. They are also killing Nazis who have been identified by at least two sources as responsible for killing Jews. They conduct interrogations, make sure the families are not present, and then shoot or strangle them. They believe these restrictions give them some semblance of legitimacy.

And then there are the Nakam, who refuse even those limitations, and whose goal is just to kill as many Germans as possible. They consider every German equally complicit, have little faith in the Nuremberg trials for producing justice, and call themselves Avengers. Their name is from the biblical word for vengeance, with “dark, dangerous” implications. They say of the Brigade Group, “We might have the same rage but not the same path,” and they tell its leader, “I wish you could stand with us. I hope you won’t stand against us.”

The Brigade does want to stop them. And so Max joins them undercover, pretending to be with them but in reality reporting back to the Brigade. Or is he? Max goes so far to prove himself to the Nakam, and its leader. Abba Kovner (a real-life character who later became a prominent Israeli leader and poet, played by a magnetic Ishai Golan) that it is impossible for us, for the Brigade, and maybe Max himself to say whose side he is on. He becomes a triple mole when, as a member of the Nakam, he infiltrates a German crew working to rebuild the city’s water supply.

Israeli writer/directors and brothers Yoav and Doron Paz want to use all of these layers to explore issues of survivor guilt, justice, revenge, and the loss of everything that made the world feel like it made sense. But the film’s inherent emotional power is undermined by the visual and narrative murkiness of its storytelling, including a gotcha twist at the end that has nowhere near the weight of the themes it's trying to explore.

What is the better way forward: punishing the guilty or building a life filled with all they tried to take away from you? Can any sustainable future be built on abandoning the very rule of law your enemies tried to destroy? As Tevye says in “Fiddler on the Roof,” the principle of “an eye for an eye and a tooth for a tooth” would leave the whole world blind and toothless.

Now playing in select theaters and available on VOD on October 14th. 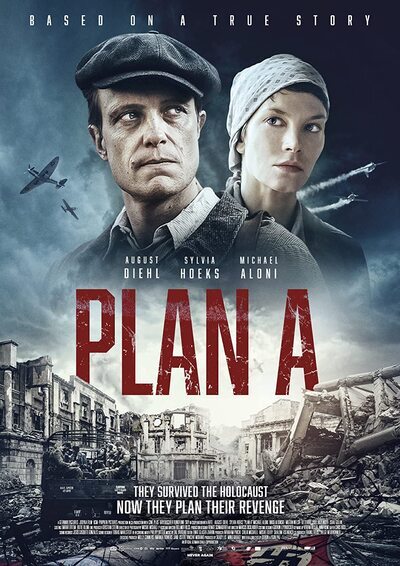