The crime comedy "Pixie" dissolves in the mind as you're watching it. You've seen it before. And the "it" you've seen before is the most derivative version of "it."

Gather 'round, children. There was a period from roughly the mid-1990s through the early aughts when the success of "Pulp Fiction" sent every distributor, large and small, on a treasure hunt across Hollywood and overseas, searching for scripts that looked, sounded, and felt like a Quentin Tarantino film, or like their most superficial version of what one was. They had soundtracks of groovy retro or retro-flavored music; pop culture-laden dialogue and monologues, delivered by gangsters, drug dealers, thieves, hitmen, molls, crooked boxers, and the like; storytelling that jumped around in time; and graphic violence and torture played for belly laughs. For every Guy Ritchie ("Snatch") who benefited from the Tarantino after-boom, dozens more directors did a wheelie or two in this cul-de-sac of cinema history and were promptly forgotten. Considering that Tarantino's films were themselves pastiches—referencing earlier movies in every scene—the photocopying seemed even more pointless.

Directed by "Wayne's World" and "Spice World" producer Barnaby Thompson, and written by his son Preston, "Pixie" feels as if it arrived via time-warp from about 1998, most likely on a VHS cassette with a "CLEARANCE" sticker on the slipcase. It checks every item on the wishlist. There's even a big title card after the opening teaser playfully renaming this story ONCE UPON A TIME IN IRELAND. This would seem self-deprecating if the movie had even an iota of its own identity save for the regionalisms.

Olivia Cooke stars as the title character, a twenty-something local gal who happens to be the stepdaughter of a local gangster (Colm Meaney) who also has two other stepchildren, one of whom—Pixie's stepbrother Mickey (Turlough Convery) hates her so much that their every interaction is marinated in impending violence. Pixie is a heartbreaker, famed by the lads for her beauty, and rumored to take erotic photographs. She wants to go to art school in San Francisco and, in the opening sequence, sets up both her current and ex-lovers in a robbery to acquire enough money for the trip. But the crime goes wrong, as robberies often do.

The bulk of the rest of the film follows Pixie and two local fellas, Frank (Ben Hardy) and Harland (Daryl McCormack), as they travel around the country, getting twisted up in bloody shenanigans at the behest of Pixie, who needs to reset the local criminal/karmic scales after that disastrous robbery. The Irish accents and landscapes and plentiful Catholic iconography (including a ring of gangsters posing as priests, as if the Church didn't already have enough problems) suggest that the film is channeling Martin or John Michael McDonagh as well as Tarantino. But really, there isn't a single non-derivative element to be seen anywhere in the film, save for the widescreen cinematography by French-born John de Borman, which captures natural light and textures with a fine art photographer's sense of presence.

There's a convoluted backstory involving Pixie's family that weaves through the film and pays off, sort of, at the end. But it's difficult to care because neither the director nor the screenwriter seem terribly invested in the characters as actual people with a life force (something that's true of Tarantino and Richie's characters even when they're being glib and coasting on their usual shtick). They're mainly just there to say supposedly clever lines and do supposedly outrageous things.

Pixie, in particular, is a mystifying failure as a character, failing to radiate the dangerous levels of va-voom that would justify the way other characters describe her. She comes off as more of a beautiful and super-competent grind with a veneer of bohemianism, as if the title character of "Juno" had been re-imagined as a femme fatale. There's a moment late in the movie where the Thompsons briefly pretend like they're going to get all "Y tu mamá también" on us—but you never believe that they're really going to go there, because the movie has been entirely devoid of sexual energy until that point. Frank brags about his insatiable sexual appetite in every other scene, and we're given no reason to think he's lying, but the Young Adult Novel energy of the three leads makes him seem more like an eight grader telling you about his Canadian girlfriend.

None of this is Cooke's fault—all you need do is look at her outstanding performance in the current "Sound of Metal" to see her range; she plays two strikingly different variants of the same character—nor is it the faults of any of the other cast-members, who all seem to be doing their best to pump the movie full of good vibrations. Alec Baldwin, affecting a "Kiss the Blarney stone, me boyo!" accent as a gun-toting gangster priest, seems to understand better than most that he's ultimately here to earn his day rate by goofing around in a regionally funded indie picture that's a tribute to tributes to tributes. 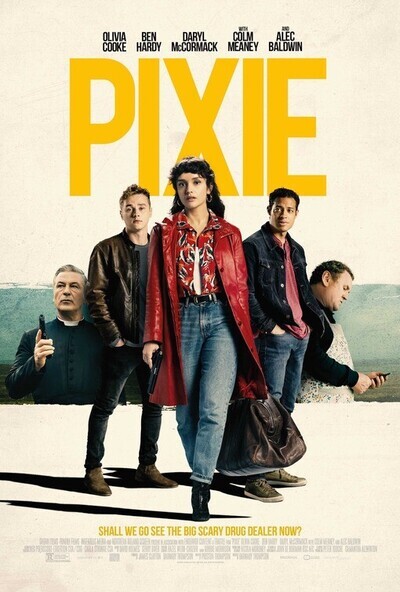