The central premise behind the new Adam Sandler comedy "Pixels" is so undeniably promising on its most basic level that as I walked into the screening, I felt a genuine anticipation that I cannot easily recall ever feeling in conjunction with one of his films, at least of those cranked out by his Happy Madison production company. Unfortunately, a good premise can only take a film so far if it has been accompanied by abysmal execution. Oh, "Pixels" does have a couple of laughs scattered here and there, and the film as a whole is certainly better than such recent Sandler disasters as "That's My Boy," "Blended" and the truly inexplicable "The Cobbler," but when one considers how good this material might have been if placed in the right hands, to see it squandered this way makes it almost more painful to view than the typical Sandler stinker.

The conceit here is that back in 1982, NASA launched into orbit a capsule that contained numerous examples of our then-contemporary popular culture as a way of reaching out to possible alien life forms that might be curious to know about that thing that we on Earth called "The Pirate Movie," including a cassette chronicling a video game championship featuring young arcade masters showing their skills at the top games of the era. Unfortunately, a hostile alien force intercepts the tape, determines its contents to be an act of war, and begins sending down large and malevolent versions of the characters from those games to attack Earth as a response to the alleged challenge with the fate of the planet hanging in the balance. The spaceships from "Galaga" rain pixilated horror in Peru, a "Centipede" games breaks out over London's Hyde Park and the grid-like layout of New York City sets the scene for what proves to be the world's largest Pac-Man game.

Drastic times call for drastic measures and so the President (Kevin James) hits upon the idea of bringing in old school gamers to advise on how to stop the invading forces. Luckily, his childhood best friend, Sam Brenner (Sandler), was a young gaming prodigy back in the day until his life was ruined after losing that aforementioned championship when he placed second at Donkey Kong. He is joined by Ludlow (Josh Gad), another participant in that competition who has become a paranoid conspiracy buff (he is convinced JFK fired first, chuckle chuckle) with an unhealthy obsession towards Lady Lisa, the scantily-clad heroine of "Dojo Girl." (This game does not actually exist but as those scoring at home will quickly discover, verisimilitude is not exactly the film's strong point) Overblown egomaniac Eddie "The Fireblaster" Plant (Peter Dinklage)—who beat Sam at that fateful Donkey Kong game—signs on as well but carries a shocking secret that could lead to the destruction of the world. Finally, in a small concession that women also play games as well, the guys are joined by Lt. Col. Violet van Patten (Michelle Monaghan), a brilliant specialist who creates the weird weaponry to be used against the invaders. (Of course, she is just a girl in a movie aimed at adolescent boys so her signature moves include zapping a Smurf and downing Chardonnay while sobbing about her romantic troubles at length to the guy who has arrived to install her flat-screen TV.)

Like I said, the premise of "Pixels" (which was inspired by a 2010 short) is sound, and in a perfect world, it could have been the hi-tech hybrid of "The Last Starfighter" and "Ghostbusters" that it clearly wants to be. Indeed, there are moments when the sight of giant-sized arcade icons wreaking havoc do have a certain grandeur to them, even if their overexposure in the coming attractions previews has inevitably reduced much of their immediate impact. Alas, while the technologies used to bring these characters from their 8-bit origins to the CGI world are as state-of-the-art as can be, the screenplay is closer to "Oregon Trail" by comparison. Instead of taking the time to really hash out the concept, co-writers and frequent Sandler collaborators Tim Herlihy and Timothy Dowling have essentially shunted it to the side in order to make room for the usual nonsense: people acting like idiots for no apparent reason, an attitude towards women that should appeal to those Gamergate oafs, cameo appearances from Sandler's buddies and the usual bits of gross-out humor. (You'll believe a Q*Bert can whiz!)

Although I can't help but wonder what someone like Joe Dante, an excellent filmmaker with a genuine interest in the perils and pleasures of American popular culture, might have done with this concept, Chris Columbus, the guy behind "Home Alone," "Mrs. Doubtfire" and the first two "Harry Potter" joints, does what he can with the material, but while some of the big special effects set-pieces are nicely put together, he seems as bored directing all the stuff in between as viewers will be watching it. On the other side of the camera, Sandler and James simply bounce from scene to scene delivering their shopworn material with such little effort that they somehow seem less substantial than the pixelated creatures they are battling, Monaghan is thoroughly wasted in a role that doesn't even begin to hint at the talents that she has displayed in the past in such things as the little-seen drama "Trucker" and the first season of "True Detective," and Josh Gad continues his campaign to become the single most obnoxious performer to grace movie screens in our time. On the other hand, Peter Dinklage does wind up scoring the lion's share of the laughs here with a swaggeringly silly turn that has clearly been inspired by Billy Mitchell, the obnoxious real-life gaming champion who was the subject of the documentary "The King of Kong."

Viewers of a certain age may look at "Pixels" with a degree of nostalgia, although it stands to reason that if you are old enough to feel nostalgic about playing "Donkey Kong" in the arcade, you are probably too old for an Adam Sandler film. However, when you consider how good it could have been and should have been, it has to go down as one of the season's bigger disappointments in the way that it quickly gives up the ghost(s). On the bright side, Hollywood is remaking films so quickly these days that it is only a matter of time before they get to doing this one again. 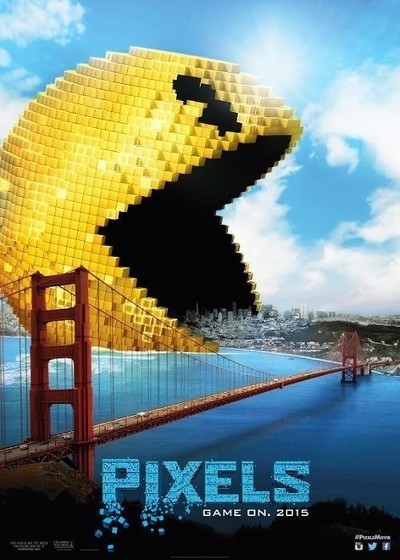 Rated PG-13 for some language and suggestive comments

Kevin James as President Will Cooper